Trump Made Dems ‘Look Like FOOLS’ by Canceling Pelosi Trip 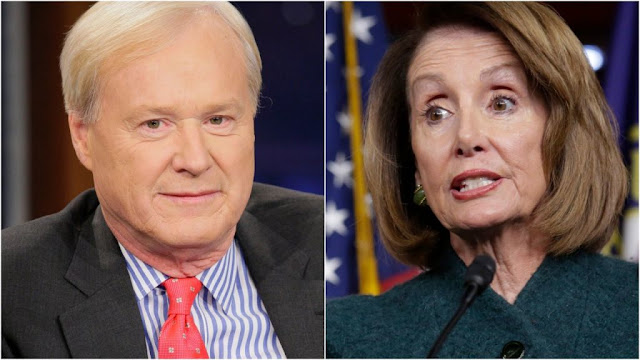 
President Trump made Democrats “look like fools” last week when he denied military aircraft to House Speaker Nancy Pelosi for an overseas trip the day after she suggested he delay the State of the Union address until the partial government shutdown is over, MSNBC's Chris Matthews admitted on his show last week.
“[Democrats] were in the bus heading to Joint Base (Andrews),” Matthews fumed to the panel on his program, "Hardball." “He made them look like fools sitting in the Capitol in the driveway, basically trying to figure out what’s coming next. He caught them in the act as if they were sneaking out of town and made them look stupid."
Matthews, who is typically critical of the president, then characterized the move as a “political dirty trick” on the part of Trump.
MSNBC'S JOE SCARBOROUGH RIPS TRUMP'S VISIT WITH THE TROOPS, CALLS PRESIDENT A 'QUIVERING COWARD'
Ben Rhodes, an MSNBC analyst who served in the Obama administration, chimed in: “I’m trying to imagine the discussion in the White House where they decide, ‘Oh, we have to get Pelosi back for what she did,’ and someone is scouring the schedule and somehow thinks it’s a good idea to embarrass the speaker of the House and to deny our troops that expression of support from the third-ranking person in line to the presidency in our system.”
Rhodes said the tit-for-tat sent a “horrible message” message to the world, which he surmised was collectively thinking: “What’s going on in the United States of America?”
Matthews said the trip was “hardly a pleasure trip for the Paris Air Show or something like that” since her congressional delegation wasn’t “bringing their spouses with them.”
Matthews then told David Jolly, a former GOP congressman who served during the Obama years: “Congress seems to have lost some of its class since you’ve been there. I don’t know what to make of this.”
Jolly responded: “There comes a point in which... voters look at Washington and say they’re all a bunch of children, they’re behaving like idiots. I think this is that week.”
On Thursday, BuzzFeed News published a bombshell story, now discredited, claiming Trump directed his former lawyer, Michael Cohen, to lie to Congress about a real-estate deal in Moscow. The story prompted a rare public rebuke from Special Counsel Robert Mueller’s office, which asserted that the report was “not accurate.”
But Matthews, appearing unconvinced by the response, said Friday: Not accurate “doesn’t mean it’s not true. In certain iotas ‘it’s not quite true.’ But it doesn’t deny the thrust of the article.”
Source>https://www.foxnews.com/entertainment/chris-matthews-says-trump-made-democrats-look-like-fools-for-canceling-pelosis-trip-abroad