Roger Stone raid shows that CNN is no longer covering Robert Mueller. They're working with him 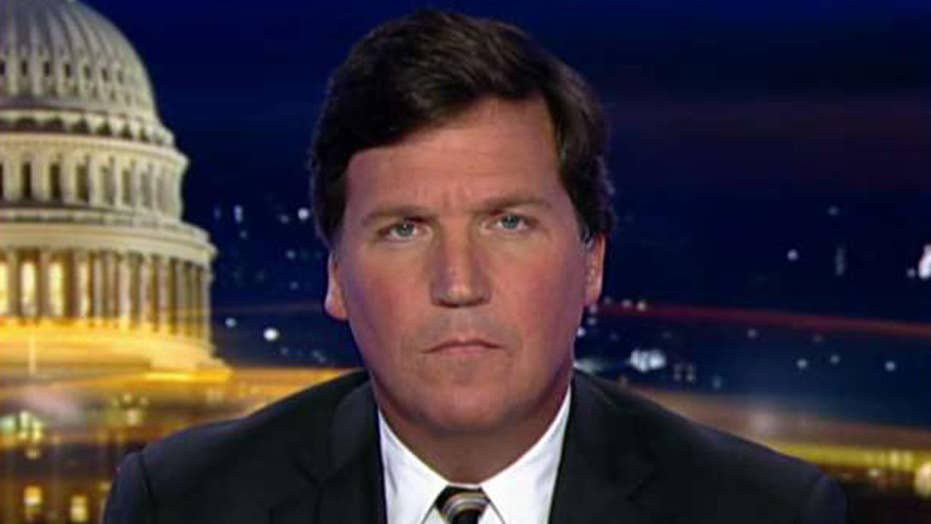 LongtimeTrump adviser Roger Stone was arrested on Friday by federal agents and charged with seven felonies, none of which had anything to do with Russian collusion or election meddling. But you’d never know that from the penalties he faces.
If convicted, Stone could die in prison. Nobody in Washington seems to find that punishment excessive. Many have cheered it. Officially, Stone was charged with lying, something most of our political elite engage in every day. But his real crime was flamboyance. Stone has spent the last 40 years giving the finger to the people in charge. In the end, they got him – they always do.
CLICK HERE TO READ MORE FROM TUCKER CARLSON.
Stone’s arrest is already fading from the headlines, replaced by the latest political crisis of the moment, or some new skirmish in the ongoing culture wars. Soon, we’ll forget it ever happened. But before we do, it is worth taking just a moment to consider a few basic questions about it, if only because nobody else is going to.
First, why did the Justice Department stage what was, in effect, a military assault on Roger Stone’s house? Stone himself asked that question on ABC over the weekend, but anchor George Stephanopoulos dismissed the DOJ tactic as "pretty standard."
“Pretty standard, as you know.” But is it “pretty standard” to send dozens of federal agents with rifles to arrest an unarmed 66-year-old man who has been charged with a nonviolent crime? No. It is not standard. It is shocking. And any honest person who pays attention could tell you that.
CLICK HERE TO VIEW THE ENTIRE EPISODE.
Roger Stone, who was there, says there were 29 agents on the scene, along with 17 vehicles, two of them armored, and a helicopter overhead. If that’s an accurate accounting, it means the feds sent more armed men to Roger Stone’s house in Fort Lauderdale than they did to Usama bin Laden’s compound in Pakistan -- just for some perspective on this.
So, what was the justification for doing that? Prosecutors knew perfectly well that Stone wasn’t a flight risk. He’s broke. He doesn’t even have a valid passport. They could have simply called his lawyer and told him to surrender. That’s the actual "standard" in cases like this. But they didn’t do that. Instead, they went in with guns drawn. Who decided to do that? How much did it cost taxpayers?
We’ve spent the last two days trying to answer those questions. It tells you a lot about contemporary America that we couldn’t - we still have no idea. The Justice Department wouldn’t answer us. The White House, which supposedly oversees the Justice Department, didn’t even respond. Maybe they don’t know the answer to those questions. It’s possible. They don’t control Special Counsel Robert Mueller. Nobody controls Robert Mueller.
Mueller can send armed men to your home to roust you from bed at gunpoint just because he feels like it, and there’s nothing you, or anyone else, can do about it. Mueller has an unlimited budget and no timetable. He doesn’t have to answer questions. He can do whatever he wants, whenever he wants, to whomever he wants. He cannot be fired.
Mueller is the single most powerful person in America, and yet nobody voted for him. He is a living rebuke to the principles of our democratic system. At the same time, our leaders tell us that we need Robert Mueller — an all-powerful, unelected prosecutor, accountable to no one — to protect us from threats to – brace yourselves here – democracy. Nobody in Washington catches the irony in any of this. Mueller himself is the threat to our democracy. The most powerful man elected by nobody.
Our media don’t ask questions about any of this, or even acknowledge that it is a question. They’ve chosen sides. Last Friday on "Tucker Carlson Tonight," Stone made the following observation: "It's disconcerting that CNN was aware that I would be arrested before my lawyers were informed. So, that's disturbing. If it was a dangerous situation, which would merit the SWAT team, well, then CNN's cameraman would be in danger. I don't know why they would be allowed to be there."
That’s a fair question, no matter who asks it. And many began asking it within minutes of Stone’s arrest Friday morning. How did CNN know about a raid that was supposed to be a secret? Did they learn from Mueller’s team?

Robert Mueller is the single most powerful person in America, and yet nobody voted for him. He is a living rebuke to the principles of our democratic system. At the same time, our leaders tell us that we need Robert Mueller — an all-powerful, unelected prosecutor, accountable to no one — to protect us from threats to – brace yourselves here – democracy. Nobody in Washington catches the irony in any of this. Mueller himself is the threat to our democracy. The most powerful man elected by nobody

CNN reacted angrily to the suggestion. We’re reporters, they said, not state media. We didn’t collude with the feds. We used reporter’s intuition.
On Sunday, CNN president Jeff Zucker dispatched his minions to bat down further questions.
"On the right, on the fringes of the right, a conspiracy theory spread about CNN or Robert Mueller, " said Oliver Darcy, CNN's senior media reporter. "They say this would be done to embarrass Roger Stone and to record his arrest to embarrass him. They're saying it was propaganda ... A lot of people, including mainstream commentators and journalists, started asking questions about this conspiracy theory and as journalists we have to be very careful not to allow bad faith actors to hijack the conversation and move the story away from what it really should be."
Save that tape. It’s one for the ages because it summarizes everything. So, to recap:  “We journalists” says CNN, need to fight back against the “fringes of the right” who want to “move the story away from what it should really be." CNN decides what it should really be. And if you don’t agree, you’re on the “fringes of the right.” In other words, shut up, you guys. Stop asking questions we don’t feel like answering.
But this show persisted, because that’s our job. We asked both CNN’s official spokesman and the kid you just saw playing media reporter a very simple question: Did Mueller’s office help you with your story. The response, of course, was feigned outrage. How dare you! You’re right wing! Be quiet!
But when we kept pressing them, an interesting thing happened: They didn’t deny it. Here’s the specific question we asked: “Did federal law enforcement officials confirm the raid on Roger Stone’s house to CNN before it happened?”

Video
Very simple question. And when we pressed it, CNN dropped the fake outrage. They just refused to answer it. Because of course CNN talked to Mueller’s people before the raid. There was never any doubt about that. All the barking aside, Mueller wanted the raid on Roger Stone’s home caught on tape and publicly aired, as a warning to other disobedient witnesses about what could happen if you step out of line. And CNN was happy to oblige.
CNN acted as the public relations arm of the Mueller investigation, as they have before. And then they lied about it in the most self-righteous possible way and then sent those kids out on TV to lie so more.
It answers a lot of questions. No wonder CNN seemed so eager to defend Friday’s raid and to belittle and attack and marginalize anyone who asked honest questions about it. The network is no longer covering Robert Mueller; they’re working with Robert Mueller. And you should know that as you watch it.
Adapted from Tucker Carlson's monologue from "Tucker Carlson Tonight" on January 28, 2019.
Source>https://www.foxnews.com/opinion/tucker-carlson-roger-stone-raid-shows-that-cnn-is-no-longer-covering-robert-mueller-theyre-working-with-him
Posted by theodore miraldi at 7:51 AM