Congresswomen Clad in ‘Suffragette White’ Give Trump a STANDING OVATION 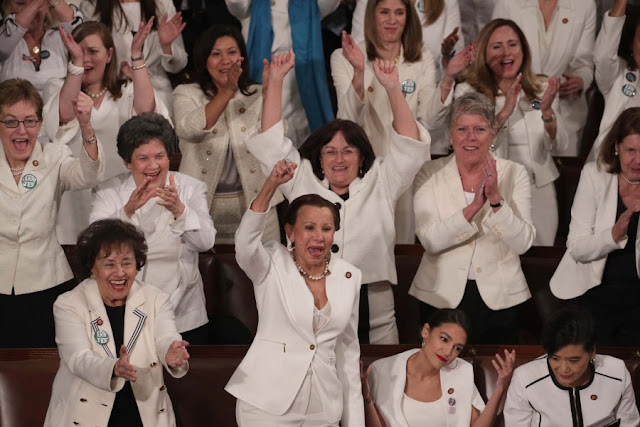 
President Trump’s State of the Union Address on Tuesday won over even his staunchest critics — if only for a few moments — by bringing a contingent of female Democratic lawmakers to their feet in a display of the bipartisanship.
The dozens of left-of-the-aisle legislators — clad in “suffragette white” in a show of solidarity and support for women’s rights — largely sat on their hands through the early passages of the 82-minute speech, with cape-clad New York Rep. Alexandria Ocasio-Cortez refusing even to applaud Trump’s call for cross-party cooperation.
But Trump flipped the script by touting the infusion of women into the workforce on his administration’s watch.
“No one has benefited more from a thriving economy than women who have filled 58 percent of the newly created jobs last year,” Trump said, sparking a standing ovation and eruption of applause from the previously stone-faced Democratic ranks.
The outburst of support seemed to surprise Trump most of all.
He cracked, “You weren’t supposed to do that!”
Seizing on the momentum, Trump urged the jubilant women to stay on their feet for their own moment of recognition.
“Don’t sit yet. You’re going to like this,” Trump teased.
“Exactly one century after Congress passed the constitutional amendment giving women the right to vote, we also have more women serving in Congress than at any time.”
Another wave of cheers, high-fives and applause echoed through the House Chamber, with House Speaker Nancy Pelosi standing over Trump’s left shoulder to beckon the few remaining holdouts to their feet.
Rep. Annie Kuster (D-NH) threw her arms toward the ceiling in a triumphant “raise the roof” dance.
A rowdy chant of “USA! USA!” then filled the room, a game response to a similar refrain from GOP lawmakers earlier in the address when Trump said, “The state of our union is strong.”
The shoutout from Trump to the record-high 127 women in the 116th Congress melted the hearts of even merciless critics like New York Reps. Nita Lowey, Nydia Velazquez and Ocasio-Cortez.
Both before and after Trump willed his repeated call for bipartisanship into reality with the playful exchange, the Democratic contingent maintained an icy, silent staredown with the president.

But at least a few Democratic lawmakers expressed their appreciation for his cross-party acknowledgment.

“We did like the fact that he gave women an opportunity to just take the floor away from him,” said Rep. Pramila Jayapal (D-Wash.). “That was probably the best part of the speech.”
New Mexico Rep. Deb Haaland was tickled by the irony of Trump recognizing them, crediting a rebuke of his policies with sweeping many of the Democratic women into office.
“It’s his . . . rhetoric that got so many women elected, so of course we’re happy.”
She added: “They can thank the president for that.”
Source>https://nypost.com/2019/02/06/why-congresswomen-clad-in-suffragette-white-gave-trump-a-standing-ovation/
Posted by theodore miraldi at 8:08 AM