Democrats’ Rush to the LEFT is pPaying Into Trump’s Hands 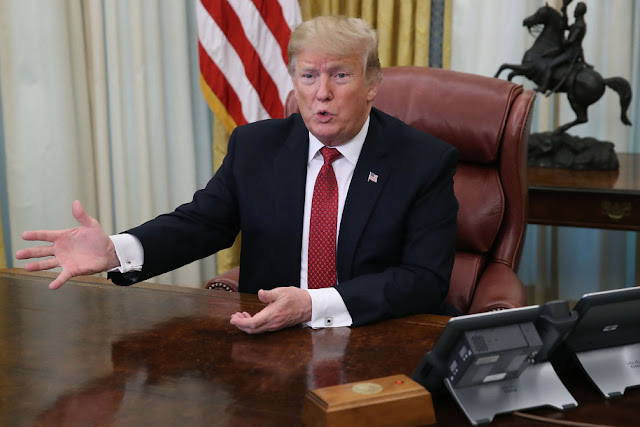 
Many conservatives who supported Donald Trump for president argued that he was the last possible barricade against an unrelenting left. We’re not talking about the #MAGA die-hards who praised everything Trump said, but conservatives who set aside their misgivings about his character and experience and supported his candidacy because he was a bulwark against pervasive leftism. As one influential conservative essay put it at the time, “The tsunami of leftism that still engulfs our every — literal and figurative — shore has receded not a bit but indeed has grown.”
If this was hyperbole in 2016, it’s not anymore. Since Trump’s election, the left has become so radicalized that it’s fulfilled the notion that Trump is the only thing standing between a sane United States and a left-wing dystopia.
We see the radicalization on several fronts. First, there’s socialism and class warfare. In 2016, when Bernie Sanders ran for president, his openly socialist ideology still had the power to shock. But since then, socialism among Democrats has become de rigueur. A Gallup poll last August found that 58 percent of Democrats and Democrat-leaning independents had a positive view of socialism, while only 47 percent had a positive view of capitalism.
This is reflected in the views and policies of Democratic leaders. New York Democratic Rep. Alexandria Ocasio-Cortez is an outspoken democratic socialist, and she’s the breakout star of the party. Ocasio-Cortez has proposed that America’s top earners pay a tax rate as high as 70 percent to finance a “Green New Deal.”
When challenged by CNN’s Anderson Cooper on her radical idea, Ocasio-Cortez said, “It only has ever been radicals that have changed this country.”
Not to be outdone, 2020 presidential hopeful Sen. Elizabeth Warren (D-Mass.) proposed a “wealth tax” of 2 percent on assets — not income — above $50 million. It may not be constitutional, but it sure is radical.
Kamala Harris, the Democratic senator for California and 2020 presidential candidate, wants a single-payer health-care plan that would offer Medicare to all Americans and do away with private insurance altogether.
The left has also ramped up its obsession with divisive identity politics and progressive-style bigotry. New York Democratic Sen. Kirsten Gillibrand, who is — naturally — running in 2020, announced that the future is “female” and “intersectional.” Sorry guys.
Ocasio-Cortez, for her part, recently said on a podcast, “We can all, almost every single person in this country, acknowledge some privilege of some type.” She identified her own identitarian privilege in the fact that she is a “cisgendered [biological] woman” who hasn’t personally experienced the disadvantages of the transgendered.
Minnesota’s new Democratic Rep. Ilhan Omar has been widely celebrated on the left for her gender, Somali background and Muslim faith. But she’s also vehemently anti-Israel and supports the Boycott, Divestment and Sanction campaign aimed at destroying the Jewish state. So, naturally, the Dems put her on the House Foreign Affairs Committee.
All this comes on top of the activist left’s embrace of the Women’s March, a Resistance organization whose leaders are unapologetic allies and defenders of the anti-Semitic Louis Farrakhan.
Finally, Democrats have adopted a pro-abortion stance so radical they’re publicly defending infanticide. Wednesday, Virginia’s Democratic Gov. Ralph Northam endorsed a proposed bill — already tabled by Virginia’s Republican-led legislature — that would allow for an “abortion” after an infant was already born.
“The infant would be kept comfortable . . . and then a discussion [about the baby’s fate] would ensue between the physician and the mother,” he said. The Democratic-controlled New York Legislature recently passed a bill similar to the one proposed in Virginia.
When 2020 comes around, the Democrats will have put meat on the bones of conservatives’ 2016 fears. But why?
In part, Democrats came to believe that Hillary Clinton was too moderate to capitalize on the public’s yearning for change. In part, too, the Democratic Party is simply being overtaken from within by the loud and charismatic voices of its newest members.
But there’s also a part of this that seems almost therapeutic for those on the left, as if they’ve channeled their rage over Trump’s election into unbridled extremism.
And Donald Trump, simply by virtue of his being the incumbent Republican president and nothing else, might be the only choice for those who are most horrified by the Democrats’ radical vision of America.
Source>https://nypost.com/2019/02/03/democrats-rush-to-the-left-is-playing-into-trumps-hands/
Posted by theodore miraldi at 8:31 AM