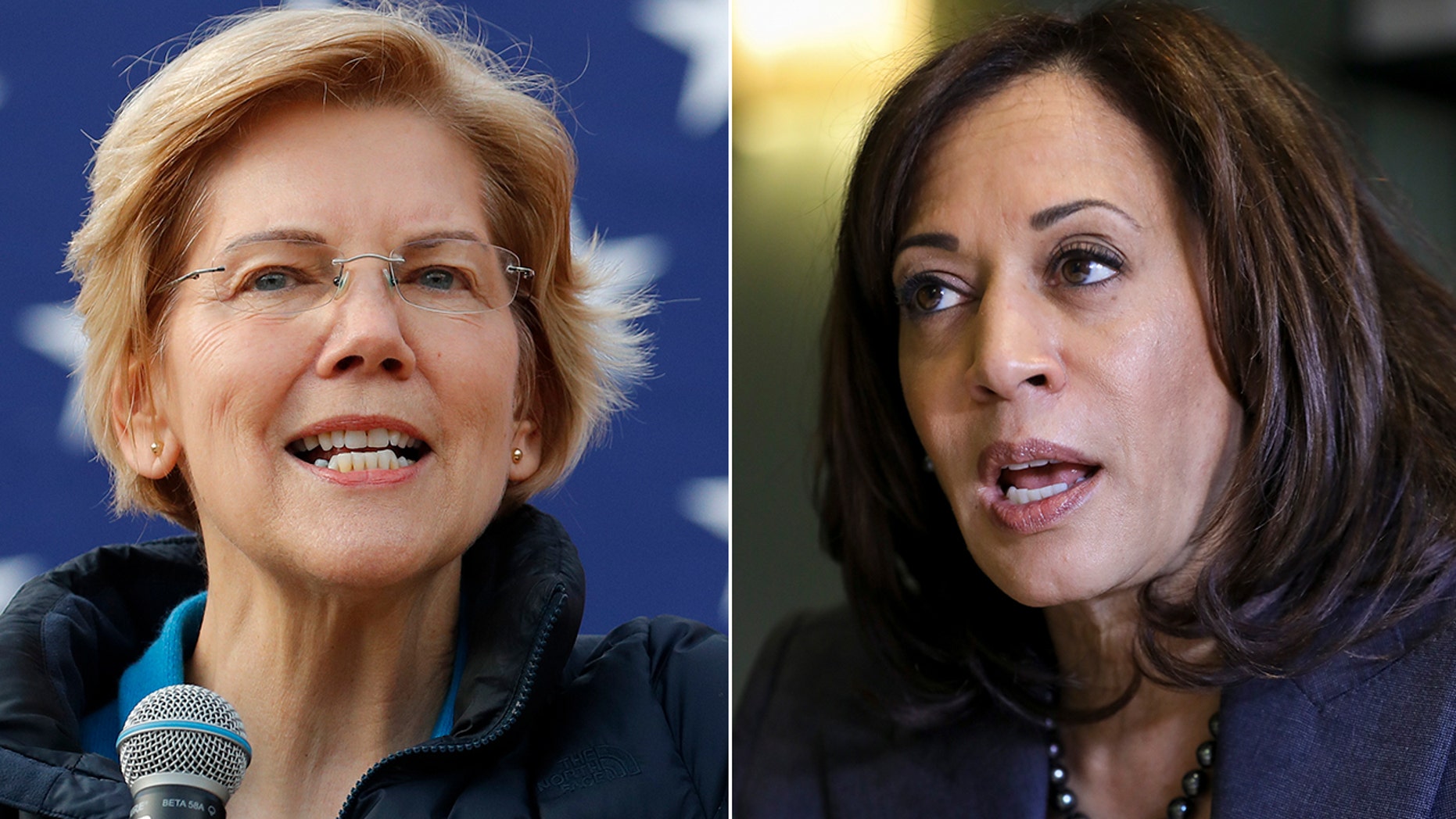 Democratic Sens. Elizabeth Warren of Massachusetts, left, and Kamala Harris of California have reportedly said they back reparations for black Americans

affected by the legacy of slavery. (Associated Press)


Two leading Democratic presidential candidates -- U.S. Sens. Kamala Harris of California and Elizabeth Warren of Massachusetts -- have reportedly said they support reparations for black Americans affected by slavery, reflecting a shift in the importance of race and identity issues within the party.
The New York Times reported Thursday that Harris doubled down on her support for reparations after agreeing with a host on the popular radio show “The Breakfast Club” that the race-conscious policy was necessary to address the legacies of slavery and discrimination in the United States.
"We have to be honest that people in this country do not start from the same place or have access to the same opportunities," Harris said in the statement to the Times. "I’m serious about taking an approach that would change policies and structures and make real investments in black communities."
Warren also supports reparations.
DEM MOCKED FOR IGNORING SLAVERY, CLAIMING 'NEVER IN HISTORY' HAVE PEOPLE WORKED WITHOUT PAY IN US
“We must confront the dark history of slavery and government-sanctioned discrimination in this country that has had many consequences, including undermining the ability of black families to build wealth in America for generations,” she told the Times. “We need systemic, structural changes to address that.”


"We must confront the dark history of slavery and government-sanctioned discrimination in this country that has had many consequences. — U.S. Sen. Elizabeth Warren, D-Mass.


Julian Castro, another Democrat running for president, has indicated that he would support reparations.
Fox News reached out to all three campaigns but did not immediately hear back late Thursday.
Reparations would involve the federal government’s acknowledgment of the ongoing legacy of slavery and discrimination and providing payment to those affected. Policy experts say it could cost several trillion dollars.
Scholars estimate that black families earn just over $57 for every $100 earned by white families, according to the Census Bureau’s Current Population Survey.
U.S. Sen. Cory Booker, D-N.J., who is also running for president, has proposed helping poor children by giving them government-funded savings accounts that could hold up to $50,000 for the lowest income brackets, the Times reported. U.S. Sen. Kirsten Gillibrand, D-N.Y., supports a plan to allow Americans without checking accounts bank at their local post office.
Other prominent Democrats have stopped short of backing reparations, including U.S. Sen. Bernie Sanders of Vermont, who dismissed the idea in 2016. Hillary Clinton and former President Barack Obama have also expressed reservations.
Supporting reparations could come with much political risk. Republicans have long attempted to paint Democrats who support policies aimed at correcting racial inequalities as anti-white, according to the Times, and polling shows reparations for black Americans remains unpopular.
Source>https://www.foxnews.com/politics/harris-warren-embrace-reparations-for-black-americans
Posted by theodore miraldi at 7:52 AM