MAXINE: TAKE TO THE STREETS!

Maxine Waters Calls for Rallies Across America to Send Trump a Message: No ‘Fake 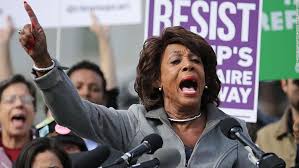 Friday on MSNBC’s “All In,” Rep. Maxine Waters (D-CA) called on Americans to protest across the country to send President Donald Trump a message that his declaration of a national emergency on the U.S.-Mexico border is “fake.”

Waters said, “I really expect we’re going to have a growing number of Republicans that are going to join with us in this disapproval. Yes, they’re concerned if a Democratic president gets elected then they can use emergency powers to do a lot of the things they don’t like. As you know, they don’t believe in climate change. They don’t want us to talk about Medicare for all or any of those subjects they think we’ll spend too much government money, even though they’ve created the largest debt we’ve seen in government for many many years.”

She continued, “I’ve been talking about impeachment for a long time. I’m absolutely stunned and amazed that the American people have taken so much off of this president. This president has lied, I think it’s been documented, 8,000 times in the last two years. This president has committed obstruction of justice right before our very eyes. And if we could ever get Manafort to tell the truth, then we will find they conspired to get Trump elected so sanctions could be lifted off of Russia. President Obama created sanctions, placed them on Russia, because of their invasion, basically in Crimea, and they can’t drill into the Arctic, do some of these things they want to do. They don’t have the equipment. Our allies are working with us to honor the sanctions, and that’s what this is all about. The Americans have taken too much off of this president. He is dishonorable. He does not deserve to be president of the United States. As a matter of fact, he loves Putin, dictators, loves Kim Jong-un, talking about they’re in love now.”

She added, “And so it’s time for everybody to stand up. All hands on deck to refuse this president these fake emergency powers that he would like the have. And so I’m urging everybody get together —rally in every community across this country all this weekend, send a message to Washington, D.C., ‘No, Mr. President, we’re not going allow you to do this.”

Posted by theodore miraldi at 6:08 PM