Maybe if she knew a little History of our nation and the World, she wouldn't keep looking like a moron...tmiraldi 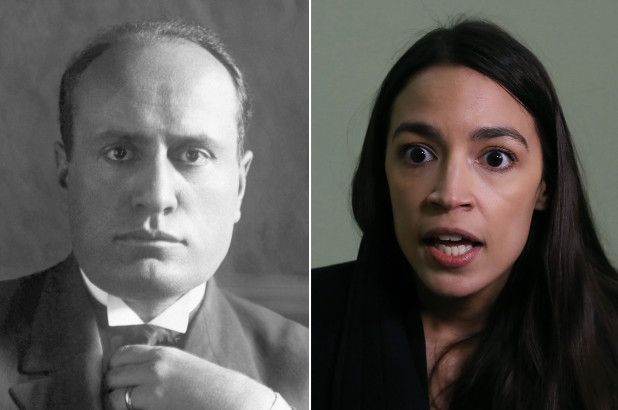 
Rep. Alexandria Ocasio-Cortez blasted a Republican senator from Texas for quoting Italian fascist dictator Benito Mussolini.
“In case you missed it, while the GOP is calling paying a living wage ‘socialism,’ a Republican Senator full-on quoted National Fascist Party leader and Hitler ally Benito Mussolini like it’s a Hallmark card,” she wrote to her 3.27 million followers on Twitter Monday.
She was referring to a tweet sent the day before by Sen. John Cornyn.
In it, he wrote: “‘We were the first to assert that the more complicated the forms assumed by civilization, the more restricted the freedom of the individual must become.’ Benito Mussolini,” the posting said.
Bud Kennedy, a reporter for the Fort Worth Star-Telegram, questioned the meaning of Cornyn’s tweet, suggesting the senator was “warning against a powerful central government” and asked him to clarify his comments.
“You nailed it, Bud. Since so-called Democratic Socialists have forgotten or never learned the lessons of history, and how their ideology is incompatible with freedom, I guess we have to remind or teach them,” Cornyn wrote in response on Twitter.
He returned to the social messaging network a couple hours later to add: “Did I over estimate the intelligence of some in the twitter sphere?”
Ocasio-Cortez, a self-described Democratic socialist, has been criticized for her progressive Green New Deal proposal that would make sweeping efforts to battle climate change and for backing a measure that would provide equal pay protections for woman.
Mussolini, known as Il Duce (“The Leader”), ruled Italy as prime minister from 1922 to 1943. He was executed in 1945.
Source>https://nypost.com/2019/02/26/ocasio-cortez-blasts-gop-senator-for-quoting-mussolini/
Posted by theodore miraldi at 11:52 AM