Democratic socialist had publicly worried about whether she could afford rent 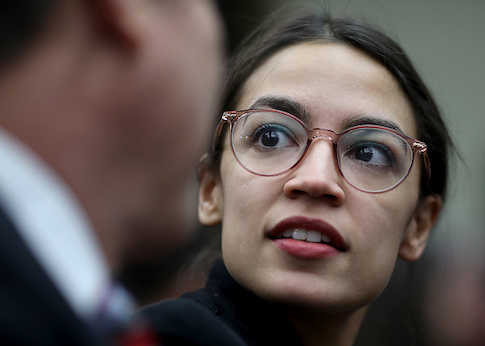 After fretting about whether she'd be able to afford rent, Rep. Alexandria Ocasio-Cortez (D., N.Y.) has moved into a luxury apartment building in the District of Columbia's Navy Yard neighborhood, the Washington Free Beaconhas learned.
Ocasio-Cortez, a member of the Democratic Socialists of America, got a big raise with her election to Congress, a job that comes with a $174,000 annual salary. She told the New York Times she was concerned about how she would get an apartment before that salary kicked in.
She ended up moving into a luxury apartment building with a wide array of amenities where rent for even a studio apartment exceeds $2,000 a month. The Washington Free Beacon is not disclosing the exact building Ocasio-Cortez lives in due to safety concerns expressed by her office.
Her office pushed back against the notion that it was hypocritical for Ocasio-Cortez, who has made housing affordability one of her top policy concerns, to move into a luxury building. A spokesman pointed out that her office also uses a car with an "internal combustion engine that runs on fossil fuels," even though she thinks their use should be eliminated.
Many sympathized with Ocasio-Cortez's stated difficulty with finding an apartment in D.C., where rents have been on the rise in recent years. Affording a second residence in the capital has proven to be a challenge for lawmakers on both sides of the aisle, with some choosing to live together with colleagues or to bunk up in their congressional office as cost-saving measures.
Ocasio-Cortez's home district residence is a Bronx apartment that was purchased in 1986 by her father, who died from cancer in 2008. She has lived there with her partner since graduating from Boston University in 2011, she has said.
City records show the mortgage on the Bronx apartment was satisfied in June 2007, leaving her only responsible for monthly contributions to home-owner association fees and property taxes, which an office spokesperson says were between $750 and $1,000 a month.
Ocasio-Cortez's living situation was frequently misrepresented during her successful campaignfocused on being relatable to the "working-class struggles" of fellow New Yorkers, with reports falsely indicating that the family had to "fight off foreclosure" on the Bronx apartment.
"In 2008, Ocasio-Cortez's father passed away from cancer when he was just 48," wrote CNBC. "In order to help fight off foreclosure on her family's apartment in the Bronx, Ocasio-Cortez took on several jobs in restaurants—often working 18-hour shifts."
The confusion was caused by Ocasio-Cortez, who avoided mentioning, before it was revealed by the Daily Mail, that her father had purchased a second residence—a three-bedroom home about 30 miles north of New York City in Westchester—where she moved as a young child.
Three days before the Daily Mail report, Ocasio-Cortez had made it seem in an interview with The Intercept that the Westchester home her mother lived in was in New York City.
"With my family we sold my childhood home," Ocasio-Cortez said. "My mother was forced to move to Florida because she could no longer afford to live in New York City, remain in New York City."
Financial disclosure forms show that her only outstanding liability is student loan debt between $15,001 and $50,000.
Ocasio-Cortez's new Navy Yard stomping ground was recently named "one of the coolest neighborhoods in the world." It has been described as the go-to place to both live and socialize for Trump staffers.
Source>https://freebeacon.com/politics/ocasio-cortez-living-in-luxury-navy-yard-apartment-building/
Posted by theodore miraldi at 5:43 PM