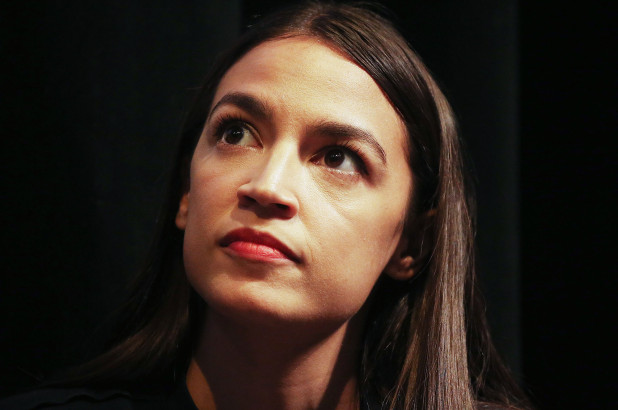 
Rep. Alexandria Ocasio-Cortez scolded media outlets for reporting that she lives in a luxury high-rise building in Washington, DC, around the time she and other high-profile Democrats appeared on a hit list compiled by a Maryland man arrested for allegedly planning a mass terror attack.
“Journalists are sharing stories about where I live the same day it’s shared that myself + others were targeted by a mass shooter,” the New York Democrat tweeted late Wednesday. “All this paired w/ amplifying unvetted conspiracy theories. It’s reckless, irresponsible & puts people directly in danger. This isn’t a game.”
Court documents show Coast Guard Lt. Christopher Hasson, who was arrested last Friday, drafted a list of politicians and media members whom he was targeting.
The list included Ocasio-Cortez, House Speaker Nancy Pelosi, Senate Minority Leader Chuck Schumer and Democratic presidential candidates Sens. Cory Booker and Kamala Harris, among others.
Hasson, who had an arsenal of 15 firearms in his Silver Spring, Md., home, searched on the internet for “Where in DC do Congress live?” and “Best place in D.C. to see Congress people,” according to police officials.
A number of outlets reported in the past week that the freshman lawmaker, whose congressional salary is $174,000, lives in a tony section of the capital in a building where rents range from $2,000 for a studio apartment to more than $5,000 for a three-bedroom.
While most of them did not give an address, they did provide identifying information and photographs about which stores were in the neighborhood and the amenities offered by her complex, which is under construction.
The articles pointed out Ocasio-Cortez’s platform as a champion of the poor and took her to task for living in an upscale building that they claimed didn’t offer affordable housing.
The building developer told The Post that they participate in the District of Columbia’s housing voucher program and have low-income people living there.
Asked to provide a specific number, the developer said: “We cannot disclose any more specific details about our residents.”
Ocasio-Cortez’s office pushed back against the notion that it was hypocritical for the congresswoman to live in upscale digs.
A spokesman told the Washington Free Beacon that her office also uses a car with an “internal combustion engine that runs on fossil fuels,” even though she thinks their use should be eliminated.
Source>https://nypost.com/2019/02/21/ocasio-cortez-rips-media-for-reporting-on-her-new-luxury-high-rise/
Posted by theodore miraldi at 12:24 PM