The Cutting-Edge WAR To ERASE Our Culture 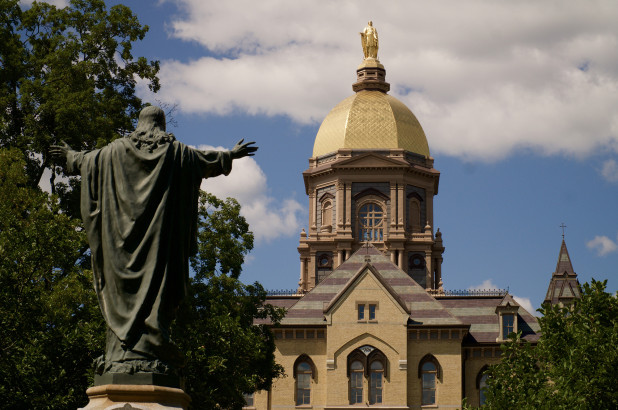 
The recent news that the University of Notre Dame, responding to complaints by some students, would “shroud” its twelve 134-year-old murals depicting Christopher Columbus was disappointing.
It was not surprising, however, to anyone who has been paying attention to the widespread attack on America’s past wherever social justice warriors congregate.
Queried about the censorship, Notre Dame’s president, the Rev. John Jenkins, said, apparently without irony, that his decision to cover the murals was not intended to conceal anything, but rather to tell “the full story” of Columbus’ activities.
Welcome to the new Orwellian world where censorship is free speech and we respect the past by attempting to elide it.
Over the past several years, we have seen a rising tide of assaults on statues and other works of art representing our nation’s history by those who are eager to squeeze that complex story into a box defined by the evolving rules of political correctness.
This might be called the “monument controversy,” and what happened at Notre Dame is a case in point: a vocal minority, claiming victim status, demands the destruction, removal or concealment of some object of which they disapprove. Usually, the official response is instant capitulation.
As the French writer Charles Péguy once observed, “It will never be known what acts of cowardice have been motivated by the fear of not looking sufficiently progressive.”
Consider the frequent demands to remove statues of Confederate war heroes from public spaces because their presence is said to be racist. New York’s Gov. Andrew Cuomo, for example, has recently had statues of Robert E. Lee and Stonewall Jackson removed from a public gallery.
In New York City, Mayor Bill de Blasio set up a committee to review “all symbols of hate on city property.”
But it is worth noting that the monument controversy signifies something much larger than the attacks on the Old South or Italian explorers.
In the first place, the monument controversy involves not just artworks or commemorative objects. Rather, it encompasses the resources of the past writ large. It is an attack on the past for failing to live up to our contemporary notions of virtue.
In the background is the conviction that we, blessed members of the most enlightened cohort ever to grace the earth with its presence, occupy a moral plane superior to all who came before us. Consequently, the defacement of murals of Christopher Columbus — and statues of later historical figures like Teddy Roosevelt — is perfectly virtuous and above criticism since human beings in the past were by definition so much less enlightened than we.
What has happened in our culture and educational institutions that so many students jump from their feelings of being offended — and how delicate they are, how quick to take offense! — to self-righteous demands to repudiate the thing that offends them? The more expensive education becomes, the more it seems to lead, not to broader understanding but to narrower horizons.
Back in 1965, the Frankfurt School Marxist Herbert Marcuse wrote an essay called “Repressive Tolerance.” It is a totalitarian classic. Marcuse distinguished between two kinds of tolerance.
First, there is what he called “bad” or “false” tolerance. This is the sort of tolerance that most of us would call “true” tolerance, the sort of thing your parents taught you and that undergirds liberal democracy.
Second, there is what Marcuse calls “liberating tolerance,” which he defined as “intolerance against movements from the Right, and toleration of movements from the Left.”
So here we are. The old idea of tolerance was summed up in such chestnuts as, “I disapprove of what you say, but I will defend to the death your right to say it.”
The new dispensation is: “I disapprove of what you say, therefore you may not say it.”
The monument controversy shows the susceptibility of “liberating tolerance” to fanaticism. And it reminds us that in the great battle between the partisans of freedom and the inebriates of virtue, freedom is ultimately negotiable — until it rouses itself to fight back. At stake is nothing less than the survival of our common history.
Roger Kimball is editor of The New Criterion. This column was adapted from an essay in Imprimis, a Hillsdale College journal.
Source>https://nypost.com/2019/02/22/the-cutting-edge-war-to-erase-our-culture/
Posted by theodore miraldi at 10:24 AM