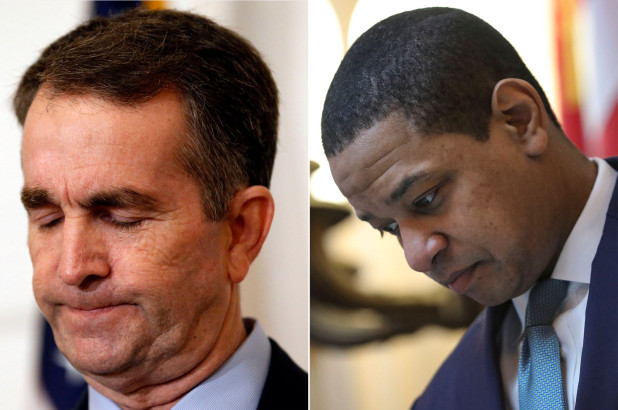 
If you are of the mind that President Trump is to blame for everything wrong and wacky in our politics, then last week was a very bad week for you.
The evidence begins with Trump’s very good State of the Union speech, where he was alternately conciliatory toward Democrats and ruthless in contrasting his policies with theirs. Reckless in their rhetoric and resistance, Dems make themselves vulnerable to charges that they support open borders, socialism and infanticide.
It doesn’t help that a lasting image of the speech was the women-in-white brigade scowling throughout, rising enthusiastically only to celebrate the president’s recognition of them.
For more proof that Trump is not the root of all madness, consider the spectacles Dems created in two states.
Start with Virginia, where the governor, lieutenant governor and attorney general — all Democrats — spent the week ducking calls to resign. Hypocrisy ran wild, with the AG among the first to call for the governor to quit over a blackface scandal, then being forced to admit he was guilty of the same offense as a teenager.
Meanwhile, the lieutenant governor was rocked by two sexual-assault allegations, with both women publicly identifying themselves and telling their stories.
Given the left’s casual use of the words “racist” and “rapist” to describe Trump, leftists everywhere felt heat to sacrifice the three Virginia officials, lest they forfeit the right to weaponize those words again.
There was, however, a problem with such purity, for it would mean a Republican, the head of the state’s House of Delegates, would become governor. Confident that partisanship would prevail over principle, all three misbehaving Dems were refusing to go.
There was also another complication: the lieutenant gov is black, and how would it look if he had to resign, and the two white men who wore blackface kept their jobs? Live by identity politics, die…
New York Dems, meanwhile, proved they, too, are capable of screwing things up without Trump’s help.

Both the city and state governments have built a financial house of cards and are fast approaching an economic reckoning. Income-tax revenues are falling off a cliff, while hiring and spending continue to climb.
City spending has soared by some 25 percent since 2014, including a planned $3 billion hike this year — even as income-tax collections are declining by nearly $1 billion.
The state projects its income-tax collections will decline by $2.3 billion, or about 4 percent, just as politicians begin their annual budget binge. Already the state plans to spend $176 billion, an increase of nearly 4 percent.
By the way, Florida, with a million more people, manages to get by with spending just $89 billion — and without a state income tax.
As the late economist Herb Stein once said of such imbalances: “If something cannot go on forever, it will stop.” Yet Frick and no-Frack, Mayor de Blasio and Gov. Cuomo, show no signs of stopping, instead hoping that a tweak here and there will be enough to keep their tax-and-spend scams afloat.
De Blasio touted “cuts” to spending — despite the $3 billion projected increase! Many more “cuts” like that and the city will go bankrupt.
Despite the high spending, there is a noticeable decline in the quality of life, and the subways are falling apart. What happens when lean times come?
For his part, Cuomo continues to falsely claim that the new federal tax law is the source of Albany’s troubles. In fact, he took office in 2011 declaring “New York has no future as the tax capital of the nation.”

Eight years later, it still is, but now he latches onto a convenient scapegoat in the limit of $10,000 in state and local taxes that can be used to offset federal taxes. While the new limit surely plays a role, it can’t be responsible for the entire $2.3 billion decline in tax collections that suddenly ­appeared.
By one calculation, the state would have to lose 16 percent of taxpayers earning over $500,000 to reduce income taxes by that amount.
Cuomo also likes to blame cold weather for why higher-income families flee his clutches. Oh, it’s the climate all right — the high tax, anti-business climate that is making the state No. 1 in having its residents leave for other states.
If officials wanted to make New York more attractive, they would cut taxes and regulations, as Trump did in Washington with great success. Instead, Cuomo and de Blasio keep ­piling on new ones, creating more reasons to head for the exits.
For example, Cuomo’s plan for congestion pricing in Manhattan is a tax by another name. Taxis and ride-share vehicles already were hit with a surcharge, and passage of the new plan could mean hikes of $11 a day or more for personal cars and $25 for delivery trucks.
The tax-climate issue is clear in the fight over a plan for Amazon to build part of its second headquarters in Queens. Whatever advantages the city and state offer, it was the $3 billion in tax credits and grants that sealed the backroom deal.
Opponents, delighted by a report that Amazon is having second thoughts, blast the incentives as a giveaway to a company that doesn’t need them, and they are right. But they are wrong in failing to understand that, without the incentives, Amazon probably wouldn’t consider New York.

But because it is so big, the company gets attention and freebies others can only dream of.
Cuomo’s claim that the company, with its spending and hiring, will make the deal pay off for the public over time is questionable. But one thing is certain: In the short run, those who pay taxes will pay for the giveaways to Amazon. That includes the small businesses who compete with Jeff Bezos’ monolith.

The Green New Deal proposed by Rep. Alexandria Ocasio-Cortez and others is being shredded because the real costs are incalculable while the benefits would be negligible.
Yet less noted is what the plan says about its 70 congressional sponsors. Their demand that we totally change how we live, what we eat and how we travel reveals a total disdain for America and Americans.
If they hate everything about us, why do they want to run our lives? And why would we ever let them?

Reader Sarah Dilorenzo spots confusion. She writes: “I’m a mom, grandma and anti-abortion advocate and the nine-month abortion law really angered me. Then I saw that a councilwoman wants to outlaw foie gras because you have to force-feed the goose. She said it was cruel and inhuman.
“I love animals, but how can we kill fully formed human babies, and care more about a goose? Something is very wrong with these liberal Democrats.”

Headline: “Bingo Brawl Breaks Out At Nursing Home.”
More proof the end is near.
Source>https://nypost.com/2019/02/09/the-democrats-disastrous-week-highlights-trumps-sanity/
Posted by theodore miraldi at 8:34 AM