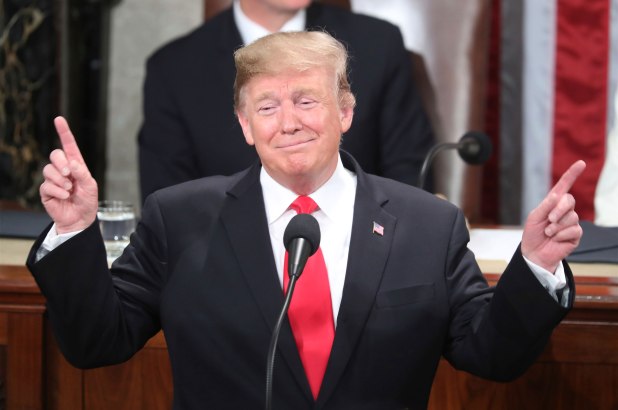 
“Unity” was the much-telegraphed theme of President Trump’s 2019 State of the Union Address, and amazingly enough he delivered — obliging Democrats to stand not only for stuff they wholeheartedly agree with, but also for themes they’re not so keen on.
Heck, he got the chamber to unite in singing “Happy Birthday” for an utterly spontaneous and genuine moment in what’s usually (to be frank) a pretty dull, overly programmed speech.
And he was utterly Donald Trump throughout — hitting issues he has pushed ever since he came down that escalator, albeit in a generally less combative tone, and even fairly enough framing his call for an end to the investigations of him as part of moving forward for the sake of the nation.
Even on the most divisive issues — the wall, abortion — he cast his active positions in the center: Protect the softest parts of the border with a smart fence; don’t sanction letting babies who’ve actually been born die on the operating table.
Time and again, he didn’t so much poke the opposition as let it poke itself — even AOC felt obliged to stand when he condemned sex trafficking. Every 2020 hopeful had to stand and clap at one point or ­another.
He broke decisively with some of the worst State of the Union conventions: For once, this wasn’t a laundry list of programs and initiatives, but rather a thematic address merely illustrated by a few policy ideas. And most of the regular-American guests who got shout-outs weren’t remotely used as partisan props. They truly were the best of us.
In the long run, it may not change the bitter dynamic in Washington or the deep ­divisions in the nation, but the president gave it an excellent shot. Who knows; he may even manage to deliver some real unity, if the opposition leaves any window for compromise.
Source>https://nypost.com/2019/02/06/trump-delivers-a-genuine-unity-message/
Posted by theodore miraldi at 2:16 PM