Trump to Call for BIPARTISANSHIP as He Threatens to Declare Emergency 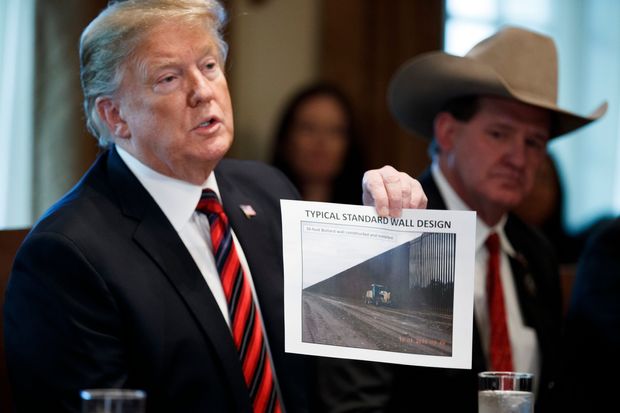 President Trump is expected to continue to press for a wall on the southern border when he makes his State of Union speech in Washington on Tuesday.
PHOTO: SHAWN THEW/EPA/SHUTTERSTOCK


WASHINGTON—President Trump in Tuesday’s State of the Union is expected to issue a plea for national unity at a moment of deep partisan divisions, with the Democratic-controlled House and the White House at an impasse over spending priorities while Mr. Trump threatens to do an end-run around both chambers of Congress to pay for a wall on the southern U.S. border.


Mr. Trump’s call for bipartisanship will be a contrast with his recent assertions that bipartisan efforts to reach a deal on border security are a “waste of time.” Last week, he said there was a “good chance” he would declare a national emergency over immigration, in which he would attempt to divert funds from elsewhere in the administration to pay for a border wall without congressional approval. The move would face immediate court challenges.

The speech will be Mr. Trump’s first joint address to Congress since Democratic election gains and the ensuing new era of divided government, in which the president and House Speaker Nancy Pelosi (D., Calif.) have already clashed over the wall funding and the timing of the State of the Union address. Most political observers concluded that Mrs. Pelosi won the first round, and Mr. Trump is expected on Tuesday to try to regain momentum and level the political playing field.

Mrs. Pelosi will be sitting behind Mr. Trump, alongside Vice President Mike Pence, as the president delivers the address. A CNN poll released Monday found Mrs. Pelosi’s approval rating jumped eight points during the recent partial government shutdown to 42%, while polling has shown that Mr. Trump has borne the brunt of the blame for the shuttering of government offices for the longest period in U.S. history.

In a January Wall Street Journal/NBC poll, 50% of respondents blamed him for the shutdown, compared with 37% who said Democrats were most responsible. The president’s overall job performance rating remained steady, with 43% approving and 54% disapproving of the job he is doing.

In addition to immigration, Mr. Trump’s address is expected to focus on trade, national security, health care and infrastructure, an area where he has said he believes he can work together with Democrats, but one in which his advisers are divided over how to move forward. He has also said he might use the speech to announce the time and place for his second summit with North Korean leader Kim Jong Un.

The White House primarily sees the speech—his second address to the nation on border security in the past month—as key to its efforts to win a public-relations battle in the standoff with congressional Democrats over border-wall funding, which led to the 35-day shutdown that left 800,000 workers without pay for weeks.

“What the administration is saying is we should be working together on these issues,” said Bryan Lanza, a former Trump campaign adviser who has been briefed on the speech. But Mr. Trump, he said, will issue a warning: “If you want to do nothing, I’m prepared to go forward alone.”

Mr. Trump is also seeking to rally support for his immigration stance among conservatives. After Mr. Trump’s decision last month to accept a temporary deal to reopen the government without a commitment to wall funding, he received heavy criticism from immigration hawks. Conservative commentator Ann Coulter called him the “biggest wimp” to serve in the White House.

The White House held a briefing for surrogates on the address last week and another on Monday morning, according to a person familiar with the discussions. Mr. Pence is set to hold another briefing on Monday evening, the person said.

Senior White House adviser Kellyanne Conway, asked how Mr. Trump could strike a positive note in his speech while at the same time threatening to declare a national emergency, told reporters Monday: “The two are not the same. The national emergency, if, in fact, he were to execute on that … is because he believes we have a crisis on the southern border and the Congress has failed to do its job.” An appeal for national unity is about ending “the politics of resistance, retribution and call for more comity.”

Drew Hammill, a spokesman for Mrs. Pelosi, said on Sunday: “The president knows, bluster aside, that Democrats are committed to securing our borders while upholding our values as a nation. The president should stop undermining bipartisan efforts to do just that.”

If Mr. Trump declares a national emergency on Tuesday, House Democrats are likely to bring to the floor a resolution of disapproval, a House Democratic leadership aide said on Monday. It would likely pass the Democratic-controlled House and come up for a vote in the Senate, where its consideration would be expedited.

One adviser close to the White House said Trump administration officials are split on whether to proclaim a national emergency, and that an internal meeting last week among top White House officials failed to settle the issue, with some top officials questioning whether such a declaration would be effective. Republican senators are also divided on the issue because it could broaden the powers of the executive branch and set a precedent for a future Democratic president.

Rep. Mark Meadows (R., N.C.), a congressional ally of Mr. Trump, said in an interview Monday about the address: “I strongly believe that the most anticipated message that Americans are wanting to hear is what is he going to do about this national emergency and how is he planning to address it if Democrats are not going to negotiate.”

To emphasize his point on immigration, Mr. Trump has invited a Department of Homeland Security human trafficking investigator and the family of a Nevada couple authorities say was slain by an immigrant from El Salvador who the White House says is undocumented.

Other guests include a convicted drug dealer who was the first prisoner released under a criminal-justice overhaul bill that Mr. Trump signed into law, a member of a Pittsburgh synagogue where a gunman killed 11 congregants in October, and a 6-year old Delaware boy named Joshua Trump whom the White House said has been bullied in school due to his last name.

An early draft of the address also contained a line in which Mr. Trump would urge Congress to “pass my proposal” for rebuilding the nation’s infrastructure, an administration official familiar with the drafting process said. When other officials saw the draft, they urged that the line be deleted because Mr. Trump doesn’t actually want Congress to pass the only infrastructure proposal his administration has produced.

Mr. Trump has continued to tell aides and officials that he “hates” central elements of the infrastructure plan introduced in early 2018, especially public-private partnerships, according to two people familiar with the speech drafts. The plan would have required cities and states to put up at least 80% of the cost of the plan, likely pushing local government into the arms of private financiers.

Mr. Trump won’t propose the element missing from any meaningful attempt to make a major overhaul of the nation’s infrastructure, the officials said: a mechanism, such as a tax increase, to raise hundreds of billions of dollars to pay for the projects.