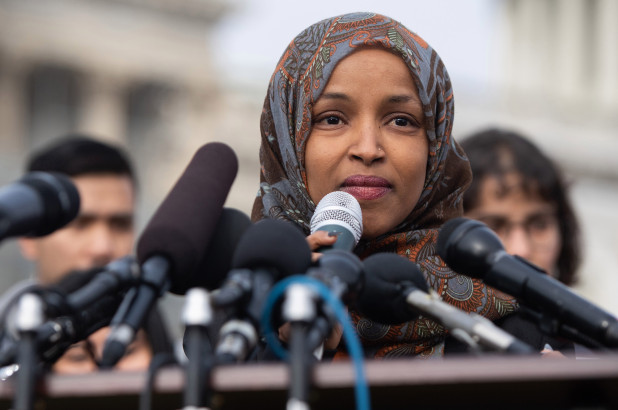 
Ilhan Omar can’t seem to help herself when it comes to anti-Semitism. The question is: What are leading Democrats and Never Trumpers, who’ve repeatedly accused the White House of empowering anti-Semitism, prepared to do about the congresswoman from Minnesota?
Omar tried to wiggle out of the implications of her earlier tweet about ­Israel “hypnotizing” the world by claiming ignorance about its meaning. She said she didn’t know she was tapping into an anti-Semitic trope when she smeared Israelis defending themselves against Hamas terrorists.
But she dug herself in deeper this weekend with tweets in which she ­asserted that the only reason why members of Congress support the Jewish state is “the Benjamins” — that is, money — offered by the American Israel Public Affairs Committee, the pro-Israel lobby.
The claim that Jews use wealth to get their way is another libel that is straight out of “The Protocols of the Elders of Zion,” the classic anti-Semitic hoax that has ­migrated from czarist Russia to the Muslim fever swamps.
It’s also a deliberate misreading of reality. The overwhelming ­majority of members of Congress support Israel because the overwhelming majority of Americans agree. But to Israel haters, it’s all a vast plot cooked up by dark, conspiratorial Jewish forces.
Americans like Israel for a variety of reasons, not least shared democratic values. Most also think there is something wrong with those who want to destroy the one Jewish state on the planet. That’s the goal of the BDS — boycott, divest and sanction — movement that Omar and her fellow Democratic Rep. Rashida Tlaib of Michigan support.
BDS masquerades as a call for justice, but its discriminatory purpose is indistinguishable from ­anti-Semitism. And if there was any doubt about that, both Omar and Tlaib have been doing their best to erase it with statements that illustrate the inextricable ties between BDS and hate.
Yet the Democratic Party has no interest in dishing out to Omar (and Tlaib) the same kind of stern justice that the Republicans meted out to Rep. Steve King of Iowa, who was guilty of sympathy for white nationalists. King was stripped of all of his committee ­assignments. But Tlaib was put on the powerful Financial Service Committee and Omar was inexplicably rewarded with a coveted seat on the Foreign Affairs Committee, which gives the BDS crowd a bully pulpit they had never enjoyed before.
It’s true that after staying quiet about previous anti-Semitic tweets, House Speaker Nancy Pelosi and the party’s leadership team finally condemned Omar’s comments and called on her to apologize. But while that’s an ­important step in the right direction, there appears to be little chance Omar and Tlaib will lose their committee assignments or face any other punishment.
The reason for this is obvious. Democrats, including many of those running for president, fear their party’s hard-left base is sympathetic to Omar and Tlaib. That’s not just because of their identities as Somali- and Palestinian-American, ­respectively. The leadership also understands that a critical mass of Democratic activists has bought into bogus intersectional theories that falsely link the struggle for civil rights in the US to the Palestinian war against Israel’s right to exist.
Dems aren’t the only ones shy about calling out Omar and Tlaib. The Never Trumper William Kristol, who regularly accuses the president of fanning bigotry, had maintained a puzzling silence on Twitter as of this writing.
And while The Washington Post’s Jennifer Rubin cheered Pelosi’s swift response to Omar, days earlier she had claimed that, “in the Democratic Party, unlike the Republican Party, racism gets no sanctuary. The Democratic Party of 2019 simply will not abide by a white governor’s racist play-acting,” referring to Virgina Gov. Ralph Northam’s blackface scandal.
Or maybe it will. Omar retains her committee seat, and Northam has clung to the Executive Mansion in Richmond.
These are the same people who have been at pains to discern anti-Semitic dog whistles from Trump, who may be flawed but is also openly sympathetic to Israel and the Jewish community.
Unless and until Omar and Tlaib are not only condemned but isolated as anti-Semites by both Democrats and Republicans, there’s little chance that this virus of hatred won’t continue to spread.
Source>https://nypost.com/2019/02/11/why-ilhan-omar-wont-pay-for-peddling-bigotry/
Posted by theodore miraldi at 12:05 PM