With Amazon GONE, Everyone Sees That EMPEROR Andrew Has NO CLOTHES 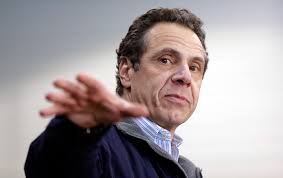 Emperor Andrew has no clothes — and Amazon noticed.
Or perhaps Jeff Bezos was channeling George Bernard Shaw — “I learned long ago never to wrestle with a pig. You get dirty, and the pig likes it” — and decided that, whatever the upside of a major presence in the Big Apple, the cost of doing business here was just too high.
Either way, arrivederci Amazon!
What’s astonishing is that the digital ­dynamo decided to come to Queens in the first place.
Isn’t the bulk of Gov. Andrew Cuomo’s economic development varsity — including his ­as-close-as-a-brother top aide — on its way to prison because of the team’s first-term pocket-lining? Haven’t all of his grand plans flopped spectacularly, one after another and usually mired in scandal?
And then there is Mayor Bill de Blasio, a party to the Amazon deal and a fellow who spent most of his first term under investigation for corrupt practices; who has a kindergartener’s attention span; and who nobody takes seriously anyway — to say nothing of trusts.
Why would any self-respecting company want to do business in such an environment?
That is, in a culture where a signed, sealed and delivered agreement traditionally is just a starting point for the so-called community-benefits-agreement shakedown — the process where local politicians attempt to squeeze cash and other considerations from good-faith investors.
And, sure enough, local pols began circling the deal the instant it was announced — ­piously preaching policy concerns, but clearly on the make for extracurricular advantages. It’s a tradition, don’t you know.
Thing is, when you’re one of the world’s most significant economic engines, you don’t have to play by local rules.
So Bezos bagged it.
He may have had other reasons — at the level Amazon plays, who knows? — but now Cuomo must live with the consequences. They will be substantial.
Has any sitting governor ever been so artfully decapitated by a rookie legislative leader quite like the way Senate Majority Leader Andrea Stewart-Cousins did it to Cuomo?
Stewart-Cousins, who has been chafing at her treatment by Cuomo for years, finally had a chance to even things up: She put the Amazon deal’s principal opponent, Sen. Michael N. Gianaris of Queens, in a position to kill it — sending an unmistakable message both to Amazon and to the governor: Your troubles are just beginning, boys!
Amazon split. Cuomo can’t.
The outcome doesn’t necessarily signal a tectonic power shift in Albany, but it definitely was a challenge to a governor who pretty much had his way with the Legislature for his first two terms — and who is entering a third facing ideologically energized and powerfully placed lawmakers dedicated to making New York America’s most progressive state.
That is, on making Cuomo live up to pugnaciously lefty rhetoric that in fact often masks more moderate policies.
One should never underestimate an experienced governor — certainly one who has been an Albany operative since 1982. Tradition, and the state Constitution, favor the ­executive branch over the legislative. Plus, Cuomo has appointed every one of the state’s seven Court of Appeals judges, and he effectively hand-picked New York’s new ­attorney general.
But the tide is running against moderate governance in Albany, and critical issues will be coming before the Legislature in coming months.
Among them are renewal of New York City rent regulation; continuation of property tax caps; extension of the state’s ­so-called millionaires tax and a proposed radical expansion of taxpayer-financed health care.
A run-amok Legislature could do substantial damage to New York’s tax base, its housing stock and its hideously expensive, but by and large effective, health care system.
So, far beyond the economic impact of the Amazon pull-out, the question is how damaged Cuomo is politically by the decision. He had attached enormous prestige to the project — and then demonstrated unequivocally that he didn’t command the horsepower to get the job done.
Now he stands naked, so to speak. Can he recover?
Source>https://nypost.com/2019/02/14/with-amazon-gone-everyone-sees-that-emperor-andrew-has-no-clothes/
Posted by theodore miraldi at 8:44 AM