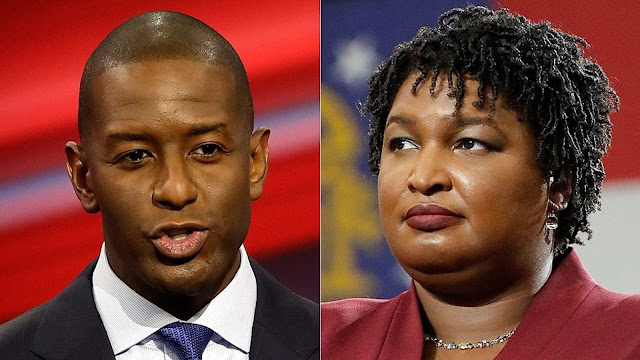 
Former Democratic gubernatorial candidates Stacey Abrams and Andrew Gillum this week questioned the outcomes of their 2018 gubernatorial races -- suggesting that they, rather than their Republican opponents, should be in the governor seats.
Gillum, the former mayor of Tallahassee who lost to now-Florida Gov. Ron DeSantis in the state’s gubernatorial race in November, hinted on HBO’s “Real Time with Bill Maher” that both he and Abrams got enough votes to win their races, and that Abrams' may have been influenced by her opponent already being in office.
STACEY ABRAMS SAYS 2020 WHITE HOUSE BID 'DEFINITELY ON THE TABLE'
“Stacey juiced as many Dems as she could out of the state of Georgia and you also had the guy who was the referee also being the player on the field, right?” he said, in reference to that fact that now-Gov. Brian Kemp was the state’s secretary of state when he ran for office.
“Guess what, had we been able to legally count every one of those votes not just in Florida but also in Georgia, I wonder what the outcome may be,” Gillum later said to applause. His comments were first picked up by the Florida Politics blog.
Gillum also agreed with Maher that an amendment to allow ex-felons to vote would make Florida “a different ball game” for Democrats next time: “That’s right,” Gillum said.
Meanwhile Abrams, who has never conceded the Georgia governor race, reportedly said on Thursday that she won her election and didn’t plan on conceding.
“I did win my election,” she said, according to ABC News reporter Adam Kelsey. “I just didn’t get to have the job.”
Asked if she planned to formally concede to Kemp, she said: “No.”

Video
Abrams has repeatedly blamed voter fraud for her defeat, but she was given the role of delivering a formal State of the Union response earlier this year.
She has also pushed a possible 2020 bid. Abrams said recently that a potential 2020 presidential run is “definitely on the table,” which would make her the second candidate to have lost a 2018 race only to go on and declare a candidacy. Beto O’Rourke, who lost his Texas Senate bid in November, declared his candidacy this week.
The open approach toward challenging or calling into question the results of an election are in stark contrast to Democrats’ stance in 2016, where politicians repeatedly expressed horror at then-candidate Donald Trump’s statements that he may not accept the results of the presidential election.
“I will look at it at the time,” Trump said when asked in a presidential debate if he would accept the result of the election.
“That’s horrifying,” then-Democratic candidate Hillary Clinton responded. “This is how Donald thinks, and it's funny but it's also really troubling. This is now how our democracy works."
But in 2017, she told Mother Jones that “there are lots of questions about [the election's] legitimacy” and said that “weaponized false information” and “voter suppression” contributed to her defeat.
Fox News' Gregg Re contributed to this report.
Source>https://www.foxnews.com/politics/democrats-abrams-gillum-question-outcomes-of-2018-election-defeats
Posted by theodore miraldi at 2:37 PM