Have The Democrats Finally Gone Too Far? 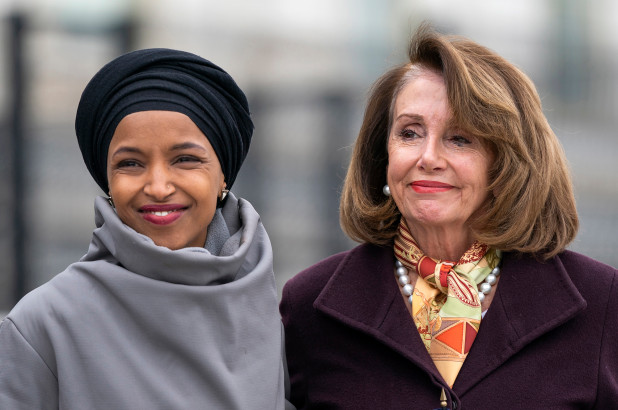 
Pick up a newspaper or watch the news about what Democrats are up to and you’re certain to ask yourself the same question dominating American politics: Are they going too far?
Did Democrats overreach when they invited convicted liar and turncoat scammer Michael Cohen to tell Congress President Trump is a bad guy?
Are they on a ridiculous fishing expedition when they summon 81 people, including three of the president’s children, to testify to a congressional panel whose chairman says he’s certain Trump committed crimes, no matter what special counsel Robert Mueller says?
Have they lost their minds with plans for a single-payer health system, the Green New Deal, unrestricted abortion, open borders and endless free stuff?
Then there is the fiasco involving Rep. Ilhan Omar, whose habit of making anti-Semitic remarks somehow became a referendum on Islamophobia. In failing to call her out and instead treating her like a victim of Republican hate, did Democrats condone her anti-Semitism?
Certainly Jewish voters might think so. Among Dems’ most loyal constituencies, with about 75 percent of their votes usually going to the party’s presidential nominee, Jews were told to suck it up and take one for the team.
Stripped of details, all these events display the conviction among Democrats that Trump’s election and conduct give them license to eliminate all restrictions on their own behavior. The pattern reveals that Trump Derangement Syndrome has gone from being a temporary madness to a permanent political strategy. Anything goes if there is some way to blame Trump.
He hit me first! You hear that on playgrounds — and now in the halls of Congress.
Although Dems are deadly serious about using the excuse to ­motivate their base from now until the 2020 elections, most voters will focus on other things as well, including candidates’ plans for the future. So do
Trump’s opponents have realistic plans, or have they simply gone off the deep end in their zeal to destroy him?
My answer is no, they have no real plans, and yes, absolutely yes, they are way out of bounds in their fanatical reactions to Trump. They assume that a majority of the public hates him as much as they do, and that ruthless, endless assaults on him, his children and business will yield political gold.

My doubts about the strategy are not meant to suggest that Trump should be exempt from criticism and disagreement. It is merely to recognize the unprecedented nature of the attacks and the far-out-of-the-mainstream policies opponents are rashly adopting.
Consider the efforts by the previous administration to deny Trump the presidency by weaponizing law enforcement and ­intelligence, and the sense of entitlement demonstrated by leaders of the FBI and Department of Justice who abused their powers for partisan purposes. Although the full extent of those efforts remains hidden, we know more than enough to conclude that there is a deep state and it tried to tip the election to Hillary Clinton.
When that failed, it tried to bring down the president. Those facts need to count for something.
As for policies, Dems have become so routinely radical that Bernie Sanders is forced to play catch-up. Two years ago, he was a socialist dreamer. Now he looks almost reasonable compared to the new crop of far-lefties pushing “aspirational” overhauls of the ­nation.
Of course, my belief that Dems are going too far could be the minority view. Polls suggest the nation is split almost exactly in half over Trump, leaving fewer and fewer swing voters up for grabs.
In fact, a case can be made that Dems were rewarded in the midterm elections for their overreach when voters gave them the House, knowing they would use it to try to impeach the president. And that’s exactly the plan that is unfolding, thanks to new House committee chairmen such as Jerry Nadler and Adam Schiff.
Seen that way, Speaker Nancy Pelosi succeeded brilliantly in handling the Omar mess. Although her initial intent was to single out anti-Semitism, without naming Omar, Pelosi didn’t have the votes to do even that.
So she followed the sheep to safety and denounced all forms of bigotry, a farce larded by commentary blaming Trump.
As the far-left Working Families Party put it in a fundraising e-mail titled “Why We Stand with Rep. ­Ilhan Omar,” Trump and the GOP are the villains because they targeted “a young, progressive, trailblazing woman of color.”
Pelosi also made cringe-inducing pandering and patronizing statements to defend Omar, saying the Somali refugee — in America for more than 20 years — “has a different experience in the use of words.”
Indeed, by turning Omar into a victim, House Dems are in sync with their media handmaidens. The overt bias against Trump and the trashing of fairness standards — none of that is the fault of journalists.
Trump made them do it. Just ask Dean Baquet, the executive editor of The New York Times.

“I think that he’s challenged our language. He will have changed journalism, he really will have,” Baquet said during the last presidential campaign.
The context was helping reporters say directly that Trump wasn’t being honest. Thus was born the decision to call the president a liar, a word the Gray Lady apparently reserves for the president.
That was also the start of supposedly straight news articles delivering scathingly negative opinions of Trump. Among the daily deluge, two recent examples stick out: One faulted Mexico for working with Trump on the border crisis, with the headline saying the government there was “Collaborating Quietly” and wanted to “Placate Trump.”
The other equated Trump with Kim Jong-un, the headline saying their summit failedbecause of “Big Threats, Big Egos, Bad Bets.”
So the Times takes the side of foreign parties as long as they oppose Trump. If they support Trump, they are “collaborating,” thus seemingly equating Mexico’s actions with those of Vichy France in World War II.
In another era, readers would punish such outrageous conduct. Now, like the Democrats they serve, the media are rewarded
for it.
Readers, revenue and the stock price of the Times have soared thanks to what an executive called the “Trump bump.”
Calling it the “anti-Trump bump” would have been more honest.
Taxpayer wake-up call
From a press release, your $180 billion state government at work:
“GOVERNOR CUOMO URGES MOTORISTS TO AVOID DROWSY DRIVING AS DAYLIGHT SAVINGS TIME BEGINS”
Tradition strikes out
Say it ain’t so: A computer will call balls and strikes in a minor league.
“Kill the computer” doesn’t have the same ring.
E$cape from New York
Reader Frank Lawton says it’s not fake news that New Yorkers are fleeing for better lives in lower-tax states. He writes: “My 29-year-old son got tired of paying $500 a month for subpar MTA train and subway tickets and the impossible prospect of finding a half-decent apartment while paying back obscene student loans. We dropped him off at JFK last week so he could start a new chapter in a less-onerous state.
Source>https://nypost.com/2019/03/09/have-the-democrats-finally-gone-too-far/
Posted by theodore miraldi at 11:20 PM