Ilhan Omar: Obama’s a ‘PRETTY FACE’ Who Got ‘Away With MURDER’ 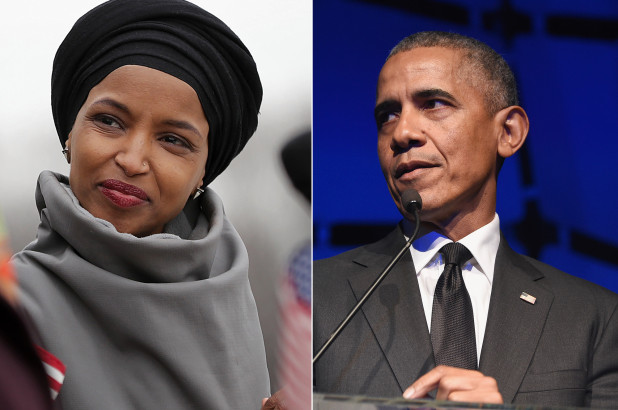 
Minnesota Rep. Ilhan Omar ripped former President Barack Obama in an interview published Friday, belittling his “pretty face” and saying his agenda of hope and change was an illusion.
She cited the “caging of kids” at the Mexican border and the “droning of countries around the world” on Obama’s watch — and argued that he wasn’t much different from President Trump
“We can’t be only upset with Trump,” the freshman firebrand told Politico Magazine.
“His policies are bad, but many of the people who came before him also had really bad policies. They just were more polished than he was,” Omar said.
“And that’s not what we should be looking for anymore. We don’t want anybody to get away with murder because they are polished. We want to recognize the actual policies that are behind the pretty face and the smile.”
The explosive comments about a man lionized by Democrats were only the latest in a series of incendiary statements that have put the national spotlight on Omar, a Somali-American Muslim who spent four years in a refugee camp in Kenya after her family fled the violence in their homeland.
In February, her second month in office, Omar responded to a tweet about House GOP leader Kevin McCarthy’s threats to punish her and another congresswoman for criticizing Israel.
“It’s all about the Benjamins baby,” she tweeted, a line from a Puff Daddy song about $100 bills.
Critics said Omar was perpetuating a hateful trope about Jewish Americans and money.
She recently got into another hot mess after another tweet was slammed by some as anti-Semitic.
The ensuing firestorm rattled the Democratic House majority and spurred days of recriminations and tense negotiations that led to the compromise package condemning bigotry that sailed through the House on Thursday, with only 23 Republicans voting against it.
The party’s leftist wing, led by New York Rep. Alexandria Ocasio-Cortez, said Omar was being singled out when others at the highest levels of government had said things that were worse and escaped censure.
More moderate Dems, including Jewish lawmakers such as New York’s Eliot Engle, wanted the resolution to focus only on anti-Semitism as a direct response to Omar’s comment, which questioned the loyalty of politicians who accept donations from pro-Israel PACs and organizations.
Ultimately, after days of chaos and acrimony, House Speaker Nancy Pelosi was able to unite her caucus — and box in a big majority of Republicans — to back the compromise.
And Omar — along with Rashida Tlaib of Michigan the first Muslim women in Congress — said she’s willing to keep speaking out and be a Republican punching bag if it helps advance her agenda, a prospect that likely makes many of her fellow Democrats cringe.
Source>https://nypost.com/2019/03/08/ilhan-omar-obamas-a-pretty-face-who-got-away-with-murder/
Posted by theodore miraldi at 2:43 PM