Ocasio-Cortez DE-LISTED From BOARD Of JUSTICE Democrats After Controversy 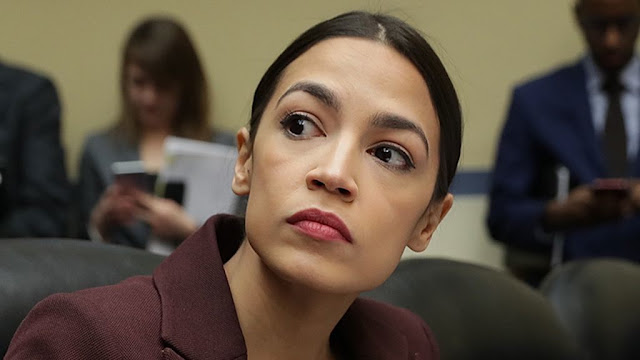 Rep. Alexandria Ocasio-Cortez, D-N.Y., reportedly has been de-listed from the board of left-wing activist group Justice Democrats, following legal and ethical questions about her affiliation with the group.

The Daily Caller reported that Ocasio-Cortez, along with chief of staff and former campaign chair Saikat Chakrabarti, have been removed from the board of the political action committee after previously holding “legal control over the entity" in late 2017 and early 2018.
OCASIO-CORTEZ, CHIEF OF STAFF ILLEGALLY MOVED $885G IN CAMPAIGN CONTRIBUTIONS 'OFF THE BOOKS,' FEC COMPLAINT ALLEGES
The Daily Caller had reported earlier this month on Ocasio-Cortez and Chakrabarti's role with the PAC, noting that the congresswoman never disclosed to the Federal Election Commission that they "controlled the PAC while it was simultaneously supporting her primary campaign." Former FEC officials said at the time this could represent violations of campaign finance law.
It was Justice Democrats that helped catapult Ocasio-Cortez from obscurity to an upset primary win over then-Rep. Joe Crowley to an election win in November. The group runs a recruitment program by which activists can nominate grassroots candidates for office to challenge incumbent Democrats, and Ocasio-Cortez gave her support to that push in a video in January. The group has also backed her on issues such as "Medicare-for-all" and the Green New Deal.
The Caller reports that Ocasio-Cortez and Chakrabarti took control of Justice Democrats in December 2017, until Ocasio-Cortez was removed from the board in June 2018 -- though she was kept on as an “entity governor” until last week. Both Ocasio-Cortez and Chakrabarti were only officially removed from the board on March 15, according to documents obtained by the outlet, almost eight months after attorneys had said she was removed.

Video
The development is the latest in the controversy surrounding the left-wing firebrand’s campaign. Earlier this month, Ocasio-Cortez and Chakrabarti were accused in an FEC complaint of violating campaign finance law by funneling nearly $1 million in contributions from PACs, including Justice Democrats, to private companies also controlled by Chakrabarti.
OCASIO-CORTEZ APPEARS IN VIDEO BACKING LIBERAL PUSH TO OUST INCUMBENT DEMOCRATS
Although large financial transfers from PACs to private LLCs are not necessarily improper, the complaint argues that the goal of the "extensive" scheme was seemingly to dodge detailed reporting requirements of the Federal Election Campaign Act of 1971, which are designed to track campaign expenditures.
The complaint was drafted by the conservative, Virginia-based National Legal and Policy Center (NLPC) and alleged that the pair appeared to have "orchestrated an extensive off-the-books operation to make hundreds of thousands of dollars of expenditures in support of multiple candidates for federal office."
Her office denied wrongdoing. “There is no violation,” Ocasio-Cortez told Fox News after the report was filed. Asked if the complaint shows she was connected to "dark money" during the campaign, Ocasio-Cortez replied, “No, no.”
Chakrabarti also defended the set-up on Twitter, saying, "We were doing something totally new, which meant a new setup. So, we were transparent about it from the start."
Fox News' Gregg Re contributed to this report.
Source>https://www.foxnews.com/politics/ocasio-cortez-de-listed-from-board-of-justice-democrats-after-controversy
Posted by theodore miraldi at 4:34 PM