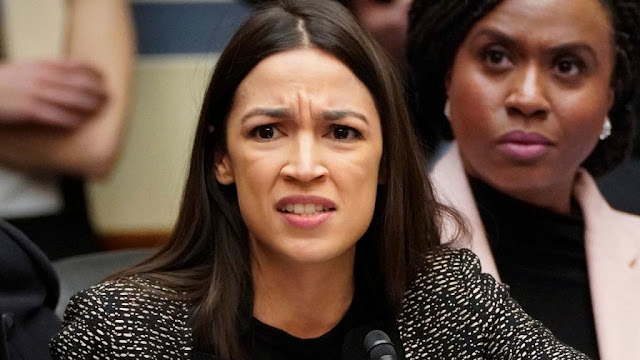 
Patrick Moore, the co-founder of the environmentalist group Greenpeace, ripped into New York Democratic Rep. Alexandria Ocasio-Cortez over the weekend as a “pompous little twit,” saying the Green New Deal plan she’s advocating is “completely crazy.”
In a series of tweets, Moore argued Ocasio-Cortez, who has called for drastically reducing fossil fuel production, doesn’t realize what would happen across the world if the radical plan were implemented.
OCASIO-CORTEZ CALLS CLIMATE CHANGE ‘OUR WORLD WAR II,’ WARNS THE WORLD WILL END IN 12 YEARS
“If fossil fuels were banned every tree in the world would be cut down for fuel for cooking and heating," Moore said in a tweet Saturday directed at Ocasio-Cortez. “You would bring about mass death.”
Moore left Greenpeace after 15 years and is now critical of the group, later writing the book, “Confessions of a Greenpeace Dropout: The Making of a Sensible Environmentalist.”
Referring to the New York Democrat as a “pompous little twit,” Moore said, “You don’t have a plan to grow food for 8 billion people without fossil fuels, or get food into the cities.”
Moore also unloaded on her for calling climate change “our World War II.”
“It's her @GND that would be worse than WW2,” he said. “Imagine no fuel for cars, trucks, tractors, combines, harvesters, power-plants, ships, aircraft, etc. Transport of people & goods would grind to a halt.”
In another tweet, Moore called the Green New Deal “so completely crazy it is bound to be rejected in the end.”
OCASIO-CORTEZ RESPONDS AFTER REPORT ACCUSES HER OF 'GREEN NEW DEAL' HYPOCRISY
He also referred to Ocasio-Cortez as a “garden-variety hypocrite,” in response to a New York Post story that said the Democrat frequently used gas-guzzling Uber and Lyft rides during her 2018 campaign instead of taking the subway station near her campaign office.
“You're just a garden-variety hypocrite like the others. And you have ZERO expertise at any of the things you pretend to know,” Moore said.
Ocasio-Cortez responded to that story over the weekend saying she’s “living in the world as it is.” But she said that shouldn’t be “an argument against working towards a better future.”


“The Green New Deal is about putting a LOT of people to work in developing new technologies, building new infrastructure, and getting us to 100% renewable energy,” she said.
Source>https://www.foxnews.com/politics/greenpeace-co-founder-tears-into-ocasio-cortez-green-new-deal-pompous-little-twit
Posted by theodore miraldi at 9:37 AM