Socialist Rep. Alexandria Ocasio-Cortez (D-NY) suggested during a talk on Saturday that America is "garbage" and that former President Ronald Reagan presented a "racist" vision of the country that "pitted" white working class people against minorities in order "to screw over all working-class Americans."

Ocasio-Cortez made the remarks while speaking at the left-leaning South by Southwest Conference & Festivals in Austin, Texas.


"One perfect example, I think a perfect example of how special interests and the powerful have pitted white working-class Americans against brown and black working-class Americans in order to just screw over all working-class Americans, is Reaganism in the '80s when he started talking about welfare queens," Ocaiso-Cortez said. "So you think about this image of welfare queens and what he was really trying to talk about was ... this like really resentful vision of essentially black women who were doing nothing that were 'sucks' on our country."
"And it's this whole tragedy of the commons type of thinking where it's like because these one, this one specific group of people, that you are already kind of subconsciously primed to resent, you give them a different reason that's not explicit racism but still rooted in a racist caricature," Ocasio-Cortez continued. "It gives people a logical reason, a 'logical' reason to say, 'oh yeah, no, toss out the whole social safety net.'"
Click on Photo to Watch Video 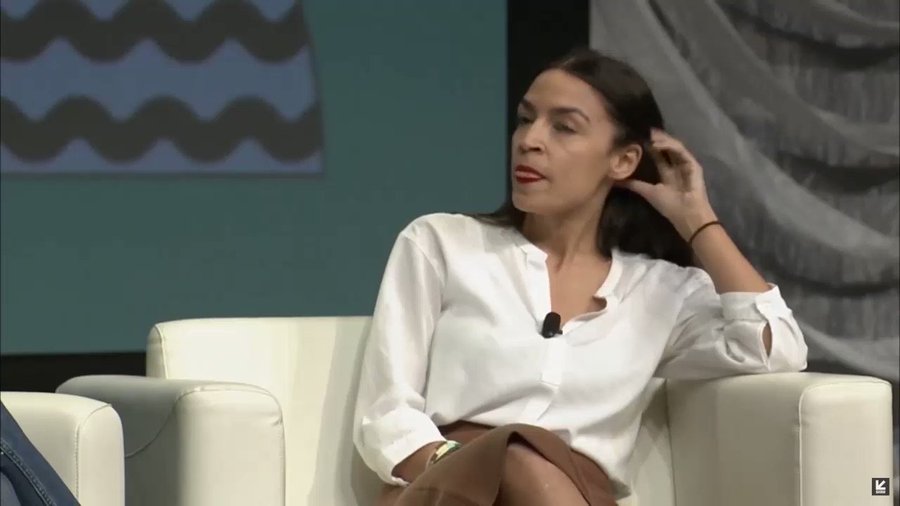 8,529 people are talking about this
Twitter Ads info and privacy
Asked moments later about the Green New Deal, Medicare for All, and the $15 minimum wage, Ocasio-Cortez suggested that America is in decline and that the current state of America is "garbage."
"I think the thing that is really hard for people to sometimes see is that when we are on this path of a slow erosion and a slow, slow, slow, just like move away from what we've always been, we'll be a hundred miles, you'll, you know you won't even realize that you've drifted a hundred miles," Ocasio-Cortez said. "So, when someone's talking about our core, it's like oh this is radical, but this isn't radical, this is what we've always been."
"It's just that now we've strayed so far away from what has really made us powerful, and just, and good, and equitable, and productive, and so I think all of these things sound radical compared to where we are but where we are is not a good thing," Ocasio-Cortez continued. "And this idea of like 10% better from garbage, is, shouldn't be what we settle for, it's like this like it feels like moderate is not a stance it's just an attitude toward life of like hmmm."
WATCH:
Ocasio-Cortez's appearance at the event came after a tumultuous week for the congresswoman during which she repeatedly came to the defense of Rep. Ilhan Omar (D-MN) after Omar made more anti-Semitic remarks last weekend.
While she was defending Omar, Ocasio-Cortez "retweeted a post from a supporter of the Popular Front for the Liberation of Palestine, which the US has designated a terrorist organization," The New York Post reported.
The 29-year-old congresswoman also sent out a fundraising email — while she was defending Omar from accusations of anti-Semitism — that accused a pro-Israel group of coming after her and Omar.
Source>https://www.dailywire.com/news/44467/ocasio-cortez-state-america-garbage-reagan-pitted-ryan-saavedra
Posted by theodore miraldi at 11:40 AM