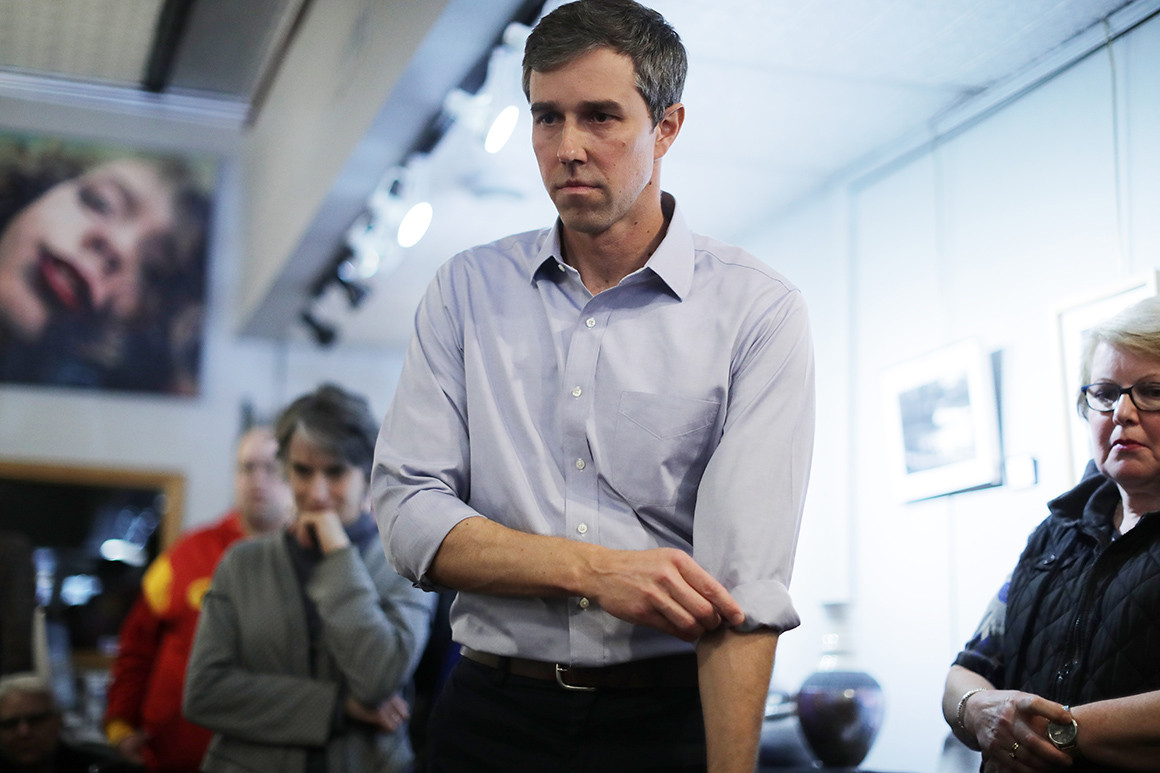 Beto O’Rourke said after an appearance at an art shop in Iowa on Friday that he was not surprised his teenage writings surfaced.
| Chip Somodevilla/Getty Images

‘WASHINGTON, Iowa — Beto O’Rourke said Friday he is “not … proud” of fiction he wrote as teenager about murdering children, while acknowledging its surfacing could hurt his campaign.

“Stuff I was part of as a teenager … not anything that I’m proud of today,” O’Rourke told reporters outside a meet-and-greet here. “And I mean, that’s the long and short of it.”

O’Rourke’s remarks followed a report in Reuters that O’Rourke, as a young member of the computer hacking group Cult of the Dead Cow, wrote an online article about how society could work without money and, in a more disturbing missive, about killing children.

“One day, as I was driving home from work, I noticed two children crossing the street. They were happy, happy to be free from their troubles. ... This happiness was mine by right. I had earned it in my dreams,” he wrote, according to Reuters. “As I neared the young ones, I put all my weight on my right foot, keeping the accelerator pedal on the floor until I heard the crashing of the two children on the hood, and then the sharp cry of pain from one of the two. I was so fascinated for a moment, that when after I had stopped my vehicle, I just sat in a daze, sweet visions filling my head.”

The report, an excerpt from a forthcoming book about Cult of the Dead Cow, came as O’Rourke pushed through the second day of his presidential campaign in Iowa. He declined to reveal how much money his campaign raised in its first 24 hours, a standard marker of early support in the presidential race.

“I can’t right now,” he said, before adding, “Let me answer better: I choose not to.”

O’Rourke raised over $80 million in his record-breaking 2018 Senate run. More than three-quarters of that money came from online donors, according to a POLITICO analysis of Federal Election Commission filings from ActBlue, the online fundraising platform used by O’Rourke and other Democrats.

Sen. Bernie Sanders has set the pace for first-day 2020 fundraising so far, according to his campaign, raising $6 million in 24 hours after announcing his run for the presidency. Sen. Kamala Harris’ launch was the second-most lucrative so far: Her campaign says it raised over $1.5 million her first day in the race.

O’Rourke has never reached the fundraising heights that Sanders hit last month, but he did raise over $1 million online on four different days during his Senate campaign, ActBlue’s filings show. And on one day, Sept. 30, O’Rourke brought in nearly $2.2 million online as interest in his run against Sen. Ted Cruz (R-Texas) reached a fever pitch.

The campaign against Cruz built O’Rourke a nationwide small-donor base, but his support was concentrated in Texas, which has not traditionally been a major source of Democratic fundraising and has been largely untapped by O’Rourke’s 2020 rivals — a potential boon for his presidential campaign, if those home-state supporters stick with him. O’Rourke took in over $30 million in online contributions just from Texas in 2017 and 2018, with an average donation of $41. His next-best states were Democratic online donor bastions: California, New York, Massachusetts, Washington and Illinois.

O'Rourke touched off a frenzied push to raise money online when he announced his candidacy on Thursday. It is unclear when he will release his initial fundraising figures, if at all, or whether he will wait for federal filing deadlines. The candidate was racing between events in eastern Iowa on Friday and was expected to remain in the state the next day.

O’Rourke said after an appearance at an art shop in Iowa on Friday that he was not surprised his teenage writings surfaced.

“I hope that as much as we can, we focus on what the really big issues are right now that people in that room care about, that I care about, that caused me and Amy to decide to enter this race.”

Asked whether the writings could hurt his campaign, he said, “It could.”

“All I can do is my best, which is what I’m trying to do,” O’Rourke said. “I can’t control anything that I’ve done in the past. I can just control what I do going forward.”