Progressives Cuomo, De Blasio May Return NY to Financial RUIN of the 70's 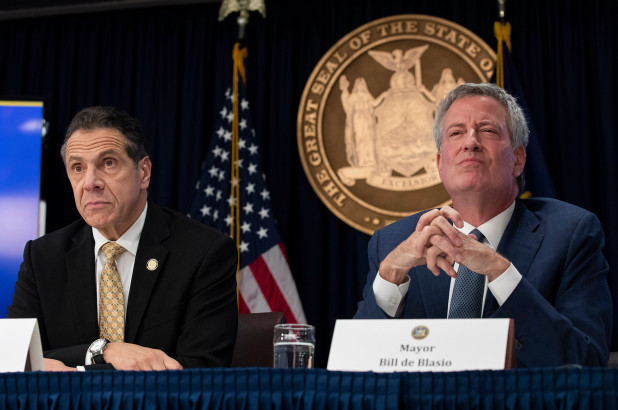 
In his 1980 classic, “The Cost of Good Intentions,” author Charles Morris chronicled how New York liberals spent the city into disaster. Free housing, college tuition, health care and welfare skyrocketed until a fiscal crisis ended the binge. As the city nearly went bankrupt, crime soared and families and businesses fled.
Liberals have been replaced by progressives but no matter what they call themselves, a new generation of New York pols are ignoring history as they tax and spend at astronomical levels.
This time, there isn’t any excuse about good intentions. Mayor de Blasio and Gov. Cuomo both want to be president, and they are recklessly turning New York into a leftist lab experiment to get national attention for themselves. Their party controls both the City Council and the state Legislature.
The result is a slow-motion disaster, with years of excessive tax and fee hikes making the city and many suburbs prohibitively expensive to govern and unaffordable for residents and employers.
City government spending has soared by 25 percent since 2014, and reports last week that de Blasio squandered $1.8 billion on just two programs, one in education and one on mental health, were shocking but not surprising. Spending on the homeless has doubled, to more than $2 billion annually, even as the homeless population grows.
Cuomo blew through $10 billion on economic-development projects that spawned more corruption than jobs. This year, state spending is going up by about 4 percent, even as income-tax collections are declining by more than 4 percent because higher-income families are fleeing to low-tax states.
In addition to the tax burden, other progressive policies also make New York unaffordable. A $15 minimum wage and other costs imposed on businesses are driving up everyday prices. And Cuomo’s pandering to the radical environmental lobby raises the cost of energy and constricts supply.
The governor banned fracking, rejected gas pipelines, reduces fossil fuels and wants to end nuclear power. The bill is now coming due, with natural gas and electric prices — already among the nation’s highest — set to rise by double digits.

Shortages are another result. In a crippling blow to new development, Con Edison imposed a moratorium on new natural gas connections in most of Westchester County, saying it might not be able to meet added demand. It warned a similar moratorium might be necessary in the city.
In another hit to consumers, they learned that prices on suburban trains and bridge and tunnel tolls are going up by about 6 percent, even as inflation is just 2 percent.
But the biggest boondoggle of all is a planned new tax on Manhattan congestion. If approved by the Legislature, it will cost drivers several thousand dollars a year for starts, making it the single biggest tax hike on the working and middle class in memory. Because delivery trucks will get hit with double or triple that amount, prices are sure to rise on everything from beer to baby food.
No longer pretending the tax will relieve Midtown congestion, the mayor and governor say the tax is necessary to close an operating deficit and help fund a new capital plan for the troubled subway system. They also promise to streamline the notoriously wasteful agency, an evergreen vow that nobody takes seriously.
One portion of the congestion tax, covering yellow cabs and ride sharing companies like Uber, already took effect despite driver protests. One rider told me of three instances where yellow-cab drivers turned off their meters to avoid having to charge the $2.50 congestion tax and expected higher tips instead.

McCray's 'Thrive' initiative on track to spend $1B in 5 years

For a recent Uber ride to Midtown, taxes amounted to 18 percent of my $42 fare, including the congestion fee, sales tax of 8.875 percent and a separate 2.5 percent tax called a “black car” fund to give drivers workers-compensation insurance. The full congestion tax could add $10 or more to the fare.
Reports indicate that the tax-and-spending surge is exacerbating the long, steady exodus of middle-class and upper income families. Much like their 1970s predecessors, Cuomo and de Blasio insist their policies are the answer when in fact they are the problem.
The governor often makes false claims about the new federal tax law, saying again Friday it is “raising taxes on New York families.” He knows that’s not true, that upwards of 80 percent of state taxpayers will get a tax cut, and many of the remaining 20 percent will see no change.
But to admit the truth that exorbitant state and local taxes are causing some high earners to pay more because the feds now limit deductions would force Cuomo to cut New York’s taxes and spending. So instead he keeps raising the cost of living through taxes on energy, fees, fares and now the enormous congestion tax. Even tips to drivers are taxed!
Cuomo pushed through casino gambling just for taxes, and seems poised to do the same on recreational marijuana. As I wrote recently, Florida has a million more people than New York, yet manages to get by with a budget half the size of New York state’s.

It took New York a generation to recover from the disaster caused by 1970s liberals bearing good intentions. To judge by the damage already done by progressives’ wrecking balls and their plans to keep taxing and spending, the future is starting to resemble the past.

To impeach or not to impeach. That’s the question, right?
Wrong. The decision has been made, but top Democrats think it’s politically dangerous to admit it, so House Speaker Nancy Pelosi wants to curb her party’s enthusiasm.
“I’m not going into that,” she said after the Michael Cohen circus.
That’s her story, but it’s not the message of Tom Steyer, the billionaire funding “The Need to Impeach.”

His group released quotations from 20 Dems following Cohen’s testimony, and all said or suggested charges against President Trump were more likely as a result. Clearly, the decisions were not based on new information, given that Cohen broke no new ground and his answers on Russia collusion were favorable to Trump.
And what about special counsel Robert Mueller? His report was supposed to be the deciding factor, but it’s looking more and more like a nothingburger, so Dems need another reason to overturn an election. Or none at all.
Pelosi can keep insisting impeachment talk is premature. But soon enough, she’ll get on the bandwagon — or get run over by it.

To counter the appeal of socialism, reader Arthur Copeland has an idea to increase support for capitalism. He writes: “I would bet that if defenders of capitalism would instead call it ‘free enterprise,’ support for it would increase exponentially.”

Well blow me down!

The ever-prissy Boston Globe takes on the Robert Kraft prostitution charge with a sociological angle. Under the headline, “Why rich powerful men buy cheap sex,” the paper reveals . . . it’s because they can!
Source>https://nypost.com/2019/03/02/new-yorks-progressives-will-send-us-back-to-70s-financial-ruin-at-this-rate/
Posted by theodore miraldi at 8:12 AM