Puerto Rico Governor to Trump Admin: ‘If the Bully Gets Close, I’ll PUNCH the Bully’ 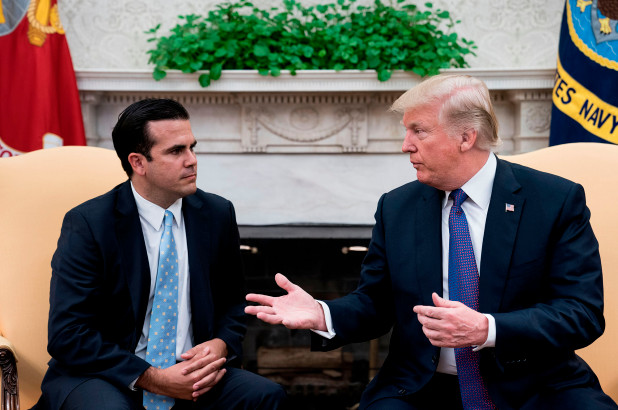 
Puerto Rico Gov. Ricardo Rosselló continued to fire shots at President Trump on Thursday — warning that “if the bully gets close, I’ll punch the bully in the mouth” — following a reported spat at the White House between his top aides and US officials.
“It would be a mistake to confuse courtesy with courage,” Rosselló told CNN.
The two leaders have been sparring this week over Hurricane Maria relief efforts after Trump reportedly told senators in a private meeting that he thought Puerto Rico was getting too much aid.
Puerto Rico officials were in Washington on Thursday trying to schedule a meeting with Trump to talk about what he reportedly said and discuss the island’s increasingly grim situation following several failed attempts to do so, according to CNN.
Rosselló’s people told the media outlet that White House officials tried brushing them off yet again — saying, “You guys have to f***ing stop with the meeting request.”
“Your governor is f***ing things up,” said trade adviser Peter Navarro, according to sources who attended the meeting and spoke to CNN.
White House officials denied making the comments and said they were working to connect with Rosselló and his aides.
“The White House recently helped set up important meetings between Governor Rossello and HUD and FEMA leadership,” White House spokesman Judd Deere said in a statement to CNN. “We understand that the governor is not visiting until later in April and we look forward to once again helping set up productive conversations with Administration leaders to discuss the island’s recovery.”
Trump’s comments about the Hurricane Maria relief efforts came Tuesday on Capitol Hill, according to the Washington Post.
Rosselló called him out later that evening, saying his suggestion to cut aid was “below the dignity of a sitting President.” He reiterated the statement Thursday during his interview with CNN.
“It’s unfortunate that we are having to hear this,” Rosselló said. “These statements lack empathy, but more so they lack the true facts of the matter. They’re not aligned with the truth and reality, No. 1. And No. 2, I just think we have to end this battle of words and just recognize we’re not his political adversaries, we’re his citizens.”

Trump has previously said he thought Puerto Rico was wasting the hurricane relief aid it was receiving. He fired off a series of tweets in 2017 saying the island’s ongoing financial crisis was “largely of their own making.”
“Electric and all infrastructure was disaster before hurricanes,” Trump said.
Rosselló blasted Trump’s reported beliefs about what was going on in the US territory, telling CNN that he “treats us as second-class citizens.”
“I just want the opportunity to explain to him why the data and information he’s getting is wrong,” Rosselló said. “I don’t think getting into a kicking and screaming match with the president does any good. I don’t think anyone can beat the president in a kicking and screaming match. What I am aiming to do is make sure reason prevails, that empathy prevails, that equality prevails, and that we can have a discussion.”
Source>https://nypost.com/2019/03/28/puerto-rico-governor-to-trump-admin-if-the-bully-gets-close-ill-punch-the-bully/
Posted by theodore miraldi at 10:24 AM