Socialism’s Millennial FANS Don’t Even Know What It Is 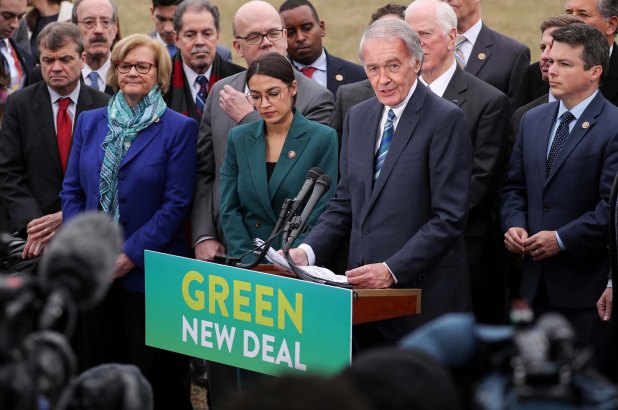 
Anyone who isn’t a socialist at 20 has no heart, but anyone who isn’t a conservative by 40 has no brain: That old epigram is certainly playing out in today’s Democratic Party.
Millennials — ignorant of socialism’s appalling economic and human-rights history — increasingly embrace socialism and its naively unrealistic prescriptions for ending all human want.
Yet so are a growing number of veteran Democratic pols who should know better, but are clearly terrified by the growing star power of the likes of Bernie Sanders and Alexandria Ocasio-Cortez. And never mind House Speaker Nancy Pelosi’s warning that “this is not a bumper-sticker war.”
Gallup reports that 57 percent of Democrats have a positive view of socialism. But do they even have any idea what they’re talking about? The same poll shows respondents supporting small business and free enterprise and rejecting the idea that government is doing too little.
And today’s Democratic Socialists don’t seem to embrace the classic definition of socialism as government control of the means of production — which has traditionally meant nationalizing whole industries.
These socialists insist they don’t support repressive states like the Soviet Union or North Korea. But Sanders and the rest refuse to say a critical word about Venezuela, which is on the brink of social and economic collapse due to socialism.
Instead, they point to Scandinavian-style socialism in nations like Denmark, Finland, Norway and Sweden as “true socialism.” One problem: Those countries aren’t socialist.
As Danish Prime Minister Lars-Lokke Rasmussen has said: “Denmark is far from a socialist planned economy. Denmark is a market economy.”
These “socialist” states have no mandated minimum wage or guaranteed jobs. Taxes are higher than US rates, but largely by making the middle and working classes pay big via the Value Added Tax — which hits consumption, not income or wealth.
True socialism, in fact, is reflected in Venezuela, Cuba and the Soviet Union. All are or were economic disasters and brutally repressive states.
Young people might be forgiven for their ignorance. Their elders should be leading — not meekly parroting them in fear.
Source>https://nypost.com/2019/03/03/socialisms-millennial-fans-dont-even-know-what-it-is/
Posted by theodore miraldi at 8:45 AM