Tammy Bruce: Alexandria Ocasio-Cortez's HYPOCRISY Is On Display In Some Remarkable Ways 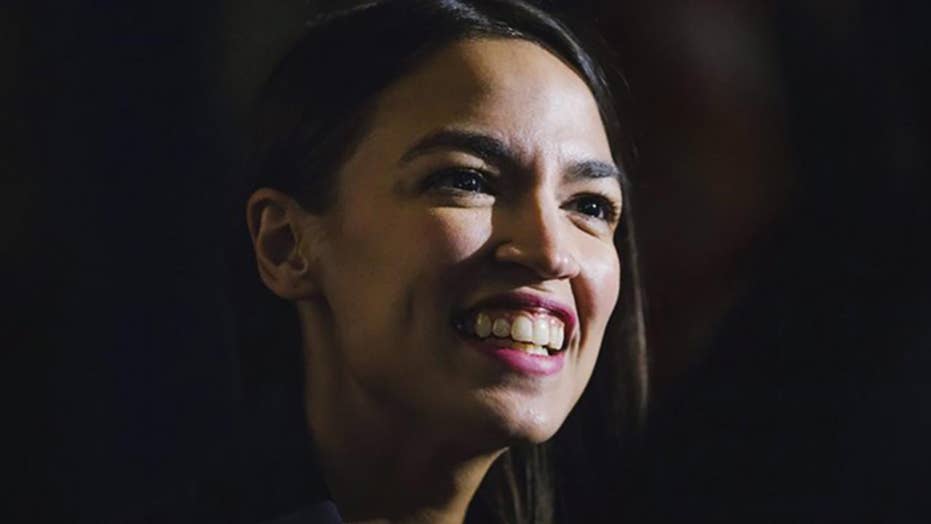 It’s bad enough that the Democrats are trying to bamboozle their own base with the so-called Green New Deal. As I discuss in a previous column, this project is simply a get-out-the-vote effort using extreme language to manipulate their own base in a cynical campaign effort for 2020.
Now, almost every day, the hypocrisy of the left’s new arrogant heroes is on display in some of the most remarkable ways.
We know Rep. Alexandria Ocasio-Cortez of New York claims the world is going to end in 12 short years if we don’t dramatically change the way we live.
TAMMY BRUCE: DEMOCRATS' TREATMENT OF THE 'BORN ALIVE' BILL IS A WAKE-UP CALL
“We’re like, ‘The world is going to end in 12 years if we don’t address climate change.’ And, like, this is the war; this is our World War II,” she said during an interview in January in New York City.
Her plan of attack means eliminating, among other things, all fossil fuels, airplanes, cars and cow flatulence. In the meantime, the New York Post found that the left’s Gen. George S. Patton in charge of climate change is more their Leona Helmsley in charge of rules only applying to the little people.
“Since declaring her candidacy in May 2017, Ocasio-Cortez’s campaign heavily relied on those combustible-engine cars — even though a subway station was just 138 feet from her Elmhurst campaign office. She listed 1,049 transactions for Uber, Lyft, Juno and other car services, federal filings show. The campaign had 505 Uber expenses alone,” the Post reported.
“In all, Ocasio-Cortez spent $29,365.70 on those emissions-spewing vehicles, along with car and van rentals — even though her Queens HQ was a one-minute walk to the 7 train,” the New York newspaper noted.
I moved to New York just a few years ago, and it took me a while to get used to the subway. But I eventually did realize its convenience (when working properly) and affordability. Ms. Ocasio-Cortez has been a New Yorker much longer than I have. Running for office involving a single district lends itself specifically to using the subway or other mass transit. After all, she’s a woman of the people. But perhaps that, too, is just a charade.
Ms. Ocasio-Cortez’ fondness for fossil-fueled travel doesn’t end with cars. The Post’s expose found after her primary win against the incumbent Democrat, “her campaign embraced the friendly skies, logging 66 airline transactions costing $25,174.54 during campaign season. The Democratic firebrand or her staff took Amtrak far less — only 18 times — despite high-speed rail being the cornerstone of her save-the-world strategy.”
Most of us do our best to recycle and take other energy-saving actions. We make an effort to live up to the standards we espouse in life. When your mission, however, is to coerce every other American into living the life of a caveman in the dark ages because of “climate change,” you have a special responsibility to take it seriously and behave as though you actually believe what you’re saying and pledging to do to everyone else.
In the meantime, Ms. Ocasio-Cortez has something else to worry about.
Fox News reported, “New York Rep. Alexandria Ocasio-Cortez on Tuesday denied violating campaign finance law after a conservative government watchdog filed a complaint with the Federal Election Commission accusing the Democratic lawmaker and her chief of staff of being part of an ‘off-the-books operation’ to spend hundreds of thousands of dollars on candidates last year.
” ‘There is no violation,’ Ocasio-Cortez exclusively told Fox News after landing Tuesday at Ronald Reagan National Airport. Asked if the complaint shows she was connected to ‘dark money’ during the campaign, Ocasio-Cortez replied, ‘No, no.’ “
The cable network also reported, “The complaint was drafted by the Virginia-based National Legal and Policy Center. It accuses Ocasio-Cortez and Saikat Chakrabarti, her chief of staff, of funneling nearly $1 million in contributions from political action committees Chakrabarti established to private companies that he also controlled.”
During an interview in early January with Anderson Cooper of CNN, he asked Ms. Ocasio-Cortez about The Washington Post awarding her “Four Pinocchios” for getting her facts wrong on issues. Her response might be of interest to the FEC:
“If people want to really blow up one figure here or one word there, I would argue that they’re missing the forest for the trees. I think that there’s a lot of people more concerned about being precisely, factually, and semantically correct than about being morally right,” she told Mr. Cooper on “60 Minutes.”
One of the reasons President Trump was elected was because Americans had grown tired of a political class that never seemed to be held accountable, nor expected to be. For Alexandria Ocasio-Cortez and her entourage, they may be finding out sooner than later that facts do matter, and celebrity won’t protect you from everything.
THIS COLUMN ORIGINALLY APPEARED IN THE WASHINGTON TIMES
Source>https://www.foxnews.com/opinion/tammy-bruce-alexandria-ocasio-cortezs-hypocrisy-is-on-display-in-some-remarkable-ways
Posted by theodore miraldi at 9:51 AM