This is no different than the Propaganda taught to young Palestinian children in school about HATING JEWS. WHY are we allowing this?
...tmiraldi 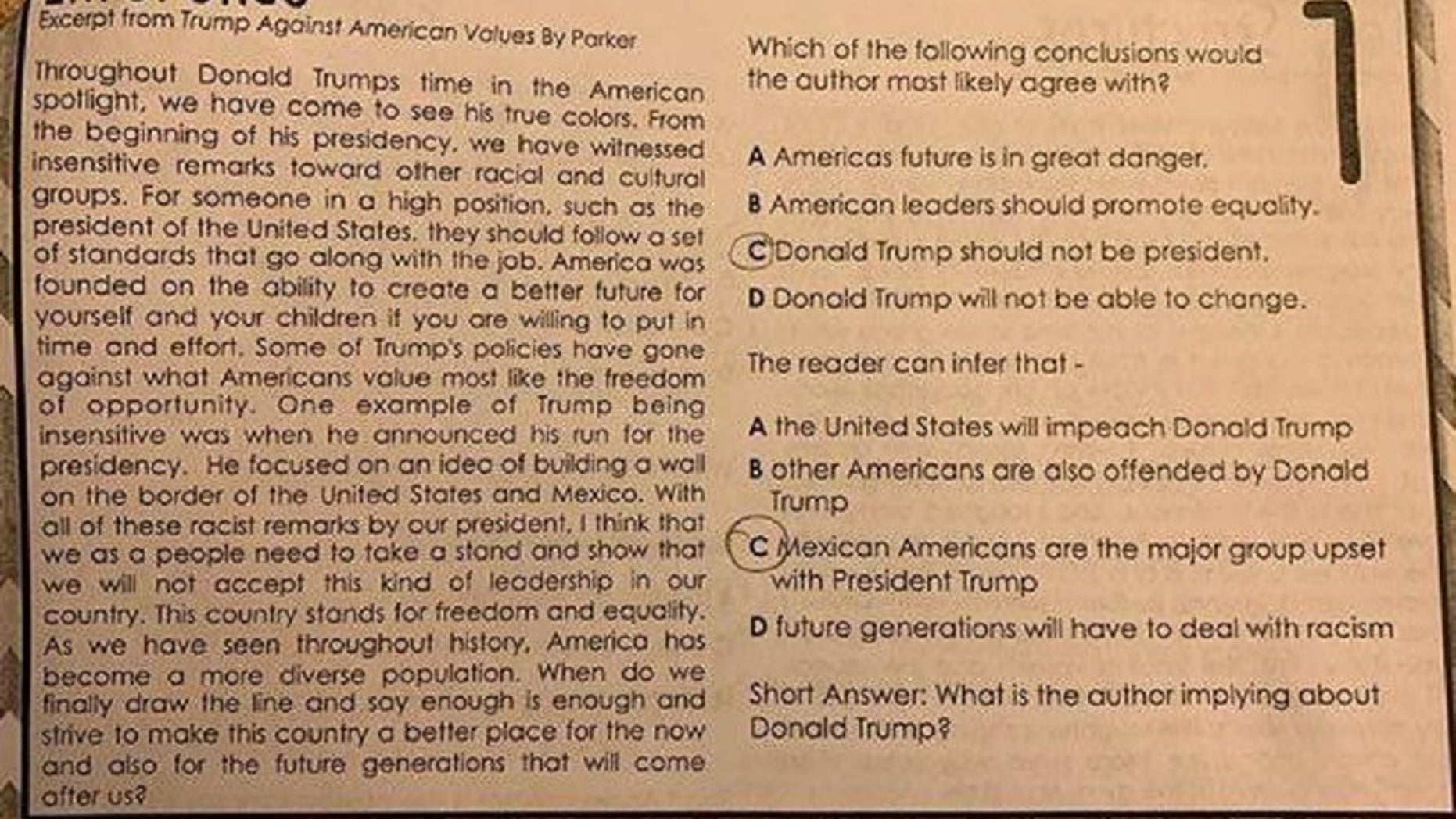 A Houston-area teacher has been criticized over an essay assignment appearing to be critical of President Trump. (Briscoe Cain / Facebook )


A Houston-area teacher was on the receiving end of death threats after asking students to review an essay that appears to be critical of President Trump, according to a report.
The teacher, who was not identified, had seventh-grade students read 10 student-written essays to determine what information could be inferred, the Houston Chronicle reported. One essay, titled “Trump Against American Values,” said some of Trump’s policies “have gone against what Americans value most, like freedom of opportunity” and that “we have witnessed insensitive remarks toward other racial and cultural groups.”
After reading, the students were given two multiple-choice questions. The first asked "Which of the following conclusions would the author most likely agree with?" One response was, “Donald Trump should not be president."
The second question asked students to complete the statement, "The reader can infer that ..." One of the choices listed was, “Mexican Americans are the major group upset with President Trump.”
COLLEGE PAPER PUBLISHES STUDENT OP-ED SLAMMING CONSERVATIVE IDEAS: 'NOT EQUAL TO LIBERAL & LEFT'
Texas Republican state Rep. Briscoe Cain was shown the assignment by a parent and blasted the district in a Facebook post on Tuesday.
"This individual has violated the sacred trust that every parent has with the State of Texas when they send their child into a public school," Cain wrote of the teacher. "They have lost the privilege of being in a classroom with Texas children, and forfeit the title of teacher. No teacher should attempt to indoctrinate a child to their ideology, no matter who is in the White House."
The parent, identified by Cain in his post as Chris Felder, said his daughter brought home the assignment asking for feedback.
"This type of non-factual rhetoric has no place in our schools regardless of who the president is," Felder is quoted as saying. "My children have experienced great teachers in the classroom, but I have also had to put up with those who see their roles as indoctrinators, not educators."
In a statement, the Goose Creek Consolidated Independent School District said the teacher did not use "good judgment" and that the matter had been settled, according to the paper. It did not specify if any disciplinary action was taken.
The district said it fielded several calls, including death threats, after Cain posted about the assignment on his Facebook page.
"Many of those calls were deeply disturbing and threatening in nature, the district said. "While we all agree that the particular passage should not have been used, the teacher made a simple error in judgment. Like all of us, teachers are human and make mistakes from time to time."
Source>https://www.foxnews.com/us/trump-related-assignment-prompts-anger-death-threats-against-houston-area-teacher
Posted by theodore miraldi at 8:16 AM