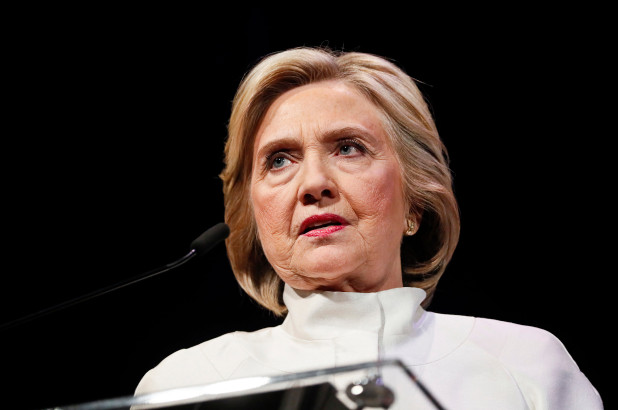 No doubt you’ve heard a Democrat or two declare that President Trump is a “threat to our democracy.” Joe Biden used his campaign launch to up the ante, saying that the 2020 election is a “battle for the soul” of America and warning that if Trump gets a second term, “he will forever and fundamentally alter the character of this nation.”
Ho hum. The suggestion that the president is the personification of evil and is destroying all that makes America exceptional has become so routine that it’s easy to ignore it. In fact, it’s an ­extraordinary charge, even for our nasty, turbulent times.
More remarkable, the charge and related talking points continue to thrive on the left despite the lack of facts to support them. Indeed, special counsel Robert Mueller shredded the heart of the wildest accusations — that Trump conspired with Russia to steal the 2016 election.
So the collusion charge was a Big Lie, but it’s a lie that won’t die. A trip down memory lane shows how we got to this perilous place.
The third and final presidential debate, on Oct. 19, 2016, was notable primarily because Trump refused to say he would accept the election results, arguing they might be rigged against him.
“I will look at it at the time,” Trump said. “I will keep you in suspense.”
Hillary Clinton immediately declared herself shocked, saying: “That’s horrifying. He is denigrating — he is talking down our democracy. And I am appalled that someone who is the nominee of one of our two major parties would take that position.”
Convinced Trump made a fatal error, she pressed the point to reporters afterward, saying “we’ve had hot, contested elections going back to the very beginning, but one of our hallmarks has always been that we accept the outcomes of our elections.”
America has “free and fair elections,” she continued. “Somebody wins and somebody loses. So what he said tonight is part of his whole effort to blame somebody else for his campaign.”

Hypocrisy alert! She became the person she warned us against.
Then and now, Dems count on the media to amplify their message, and all the usual suspects echoed Clinton after the debate. Smug ones predicted that Trump’s rigging remark would give her a landslide victory.
“A degrading spectacle,” The New York Times editorial page thundered, calling Trump’s refusal to pledge acceptance of the results “further proof that this would-be Berlusconi doesn’t seem to even realize how the American constitutional system operates.”
New York magazine later reported the Obama White House was so alarmed that it devised a “secret plan” to deal with the fallout if Trump rejected the results.
The obvious assumption behind the outrage was that Clinton would win, and it would be Trump who would try to delegitimize the results.
Yet 2½ years later, Clinton is still casting doubt on the election. Just last week, she did it again, and continues to accuse the president of betraying America.
“Our election was corrupted, our democracy assaulted, our sovereignty and security violated,” she wrote in The Washington Post. Invoking Watergate, she said the Mueller report “documents a serious crime against the American people” and demanded that Trump be punished, lest he “redouble his efforts to advance Putin’s agenda.”
So Clinton has been consistent, but her argument has not aged well, to put it kindly. It turns out that while some Russian agents did try to sow discord and help Trump, she worked with other Russians to compile her phony dossier on him. Her team gave it to the FBI, which used it as an ­excuse to spy on Trump.
So his suspicions about the election were well founded. It was rigged against him.
The saving grace is that the Obama White House and its law-enforcement and intelligence leaders were no match for the constitutional system they tried to thwart. Their plot to make Clinton president failed.
To that end, it’s worth recalling a Saturday not long after Trump took office. It was March 4, 2017, at 7:35 a.m. when his tweet woke the nation.
“Terrible! Just found out that Obama had my ‘wires tapped’ in Trump Tower just before the victory. Nothing found. This is ­McCarthyism!” he wrote.
Trump’s press office was so surprised, it asked him if the tweet was real. It was, he assured them.
Meanwhile, the media Praetorian Guard rushed to defend Obama, with CNN calling Trump’s claim “baseless” and “without evidence.”
I recount this history to show, with gratitude, how far we’ve come despite Obama, Clinton and the media. And to express hope that we get to the promised land of finding out what really happened in 2016.

Consider the big things we know now that we didn’t know when Trump fired off that sensational tweet.
First, we know with certainty that Trump did not conspire with Russia and that he did not obstruct Mueller’s investigation. He won the election fair and square.
Second, we also know with certainty that there was spying on the Trump campaign. Whether there was actual wiretapping at Trump Tower is unclear, but there is no doubt that something profoundly wrong and sinister took place during the campaign and when Trump entered the White House.
If Attorney General Bill Barr keeps his promise, we will know exactly what was done, and who did it.
Which brings us back to the Big Lie about Trump being a “threat to our democracy.”
Clinton and other Dems continue to peddle it because it is their last defense against the emerging truth.
In fact, some people did try to destroy our democracy and change our nation’s character. They are still trying to cover up their crimes.
None is named Donald Trump.
Congestive tax failure
The congestion tax aimed at punishing anything that moves in Midtown Manhattan is two years away, but reasons why it should never happen already are coming fast and furious.
New Jersey is demanding that its residents who pay the exorbitant tolls on Hudson River crossings should get credit against any congestion tax. Other demands for exemptions and reductions are in the works.
Also, The Post report on the absurd overtime costs at commuter rail lines shows again how unserious the MTA is about controlling costs. One worker raked in $344,147 in overtime in one year, fattening his lifetime pension to $162,000 annually!
Finally, Mayor de Blasio added $300 million to the budget he proposed just two months ago. Not a penny of the increase will go to the MTA, instead being spread here and there like so much honey for special interests.
Meanwhile, there still is no claim in Albany or City Hall that the tax would make a dent in congestion.
Catering to caf-fiends
Noting Starbucks’ plan to install needle-disposal boxes in restrooms, reader Cheryl Henry predicts an unhappy trend. She asks: “How long before Starbucks installs an intercom system so drug users can check in with their parole officers?”
Source>https://nypost.com/2019/04/27/battling-the-democrats-big-lie-about-donald-trump/
Posted by theodore miraldi at 8:40 AM