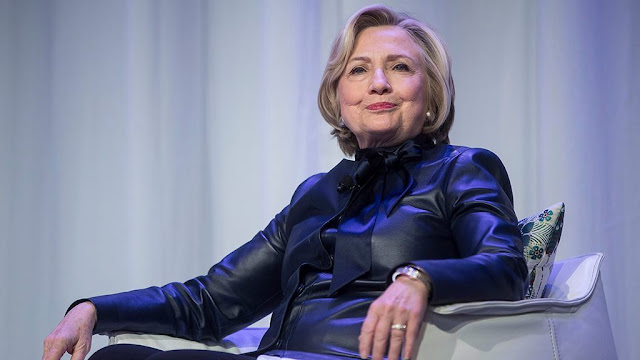 
The FBI failed to respond to an October 2018 Freedom of Information Act (FOIA) request seeking more information about secretive communications in late 2016 between a top Hillary Clinton campaign lawyer and the bureau's then-general counsel, according to the transparency group Judicial Watch.
Additionally, the group said, the FBI has ignored September 2018 FOIA requests concerning bureau communications with, and payments to, British ex-spy Christopher Steele -- who authored the infamous anti-Trump dossier.
In response, Judicial Watch announced Tuesday it has filed lawsuits seeking the full release of all relevant documents. The flurry of litigation comes just days before Special Counsel Robert Mueller's report is set to be publicly released, with some redactions.
Separately on Tuesday, Senate Judiciary Committee Chairman Lindsey Graham was joined by Sens. Chuck Grassley and Ron Johnson in sending a letter to the Justice Department demanding the release of information concerning the FBI's investigation of Clinton's private email server, known as the "Midyear Exam" probe.
"In May of 2016, around the same time then-FBI Director James Comey was drafting a statement exonerating Clinton, the FBI’s Midyear team wrote a memo seeking DOJ permission to review highly-classified information 'necessary to complete the investigation,' according to the unclassified [DOJ Inspector General] report," the chairmen wrote.
WASHINGTON, DC - DECEMBER 07: Former Federal Bureau of Investigation Director James Comey leaves the Rayburn House Office Building after testifying to the House Judiciary and Oversight and Government Reform committees on Capitol Hill December 07, 2018 in Washington, DC. (Photo by Chip Somodevilla/Getty Images) (Chip Somodevilla/Getty Images)
"However, the memo was never sent to DOJ and the Midyear investigation was closed shortly thereafter," the chairmen added. "The classified annex [of the DOJ IG report] includes additional detail about the information in question, its potential relevance to the Midyear investigation and the FBI’s justification for failing to review it."
Now that Mueller's investigation has concluded, the chairmen wrote that they were renewing their previously rejected requests for "details on the FBI’s decision not to seek potentially-relevant information during the Midyear investigation."
DOJ REACHED SECRET AGREEMENT WITH CLINTON LAWYERS NOT TO SEARCH SERVER EMAILS RELATED TO CLINTON FOUNDATION
The Mueller report's Thursday release is expected to shed more light on the Russia investigation's conclusions that the Trump campaign did not improperly collude with Russia, despite multiple attempts by Russian-affiliated individuals to involve the Trump team in computer hacking.
The ongoing litigation and document requests could provide more information on the beginnings of the Russia investigation, which Republicans have charged was tainted with visible anti-Trump bias from the start.
“How and why did the FBI pay Christopher Steele, who was already being funded by the Clinton campaign and DNC through Fusion GPS?”  Judicial Watch President Tom Fitton asked in announcing the lawsuits. “That we had to sue for this basic information shows the FBI may have something more to hide.”
Former British spy Christopher Steele sat for a four-hour videotaped deposition last month.
Associate Deputy Attorney General Bruce Ohr told Congress that “at some point during 2017, Chris Steele did speak with somebody from the FBI, but I don’t know who.”
But FBI records unearthed by Judicial Watch showed the bureau -- which paid Steele at least 11 times in 2016 -- claimed to have dropped Steele as a source in November 2016, after he leaked his connection to the FBI to the media.
The separate suit to obtain the Clinton-related communications, Fitton said, aims to "fully expose the scandalous collusion between the Obama FBI and the Clinton-DNC political operation to target Hillary Clinton’s political opponent, Donald J. Trump."
Fox News reported exclusively in October, citing sources closed to a congressional investigation, that a high-powered lawyer working with the DNC and the Clinton campaign contacted the FBI’s general counsel in late 2016 and provided documents for the Russia probe as federal investigators prepared a surveillance warrant for Trump campaign aide Carter Page.
That Fox News report was cited in a related Judicial Watch lawsuit filed in December, which sought more information about the contacts between the lawyer and the FBI.
FORMER FBI GENERAL COUNSEL THOUGHT CLINTON SHOULD BE PROSECUTED UNTIL 'PRETTY LATE' IN EMAIL PROBE
The FBI official who was contacted, James Baker, revealed the exchange to congressional investigators during a closed-door deposition late last year. He said Perkins Coie lawyer Michael Sussmann initiated contact with him and provided documents as well as computer storage devices on Russian hacking.
Former FBI General Counsel James Baker testified last year that he thought Hillary Clinton should have been prosecuted until 'pretty late' in the email probe. (Official government portrait)
The sources said Baker described the contact as unusual and the “only time it happened.”
Perkins Coie was a key player in the funding of the controversial anti-Trump dossier, which Republicans have long suspected helped fuel the FBI’s investigation. The DNC and Clinton campaign had hired opposition research firm Fusion GPS in April 2016, through Perkins Coie, to dig into Trump’s background.
Fusion, in turn, paid Steele's company Orbis Business Intelligence, a reported $168,000 in 2016 to compile the dossier, memos from which were shared with the FBI in the summer of 2016.
In the warrant application, the FBI flatly told the FISA court that Page was conspiring with the Russian government. He has not been charged with wrongdoing of any kind, and later sued the DNC for defamation.
DOJ IG BLAMES SYSTEM-WIDE SOFTWARE FAILURE FOR THOUSANDS OF MISSING TEXTS; STRZOK'S MUELLER PHONE TOTALLY WIPED
Sussmann’s contact with Baker suggested another connection between the early stages of the FBI’s Russia probe and those working with the DNC and Clinton campaign.

'Democrats are stunned and scared that accountability has returned to the Justice Department,' The Wall Street Journal's Kim Strassel writes.
Sussmann's bio on the Perkins Coie website describes him as a former senior Justice Department official with extensive national security and cybersecurity experience: "[Sussmann] is engaged on some of the most sophisticated, high-stakes matters today, such as his representation of the Democratic National Committee and Hillary Clinton’s presidential campaign in their responses to Russian hacking in the 2016 presidential election."
Asked about Baker’s statements, however, a Perkins Coie spokesperson said at the time that Sussmann’s contact was not connected to the firm’s representation of the DNC or Clinton campaign.
The spokesperson said in a statement: “Prior to joining Perkins Coie, Michael Sussmann served as a cybercrime prosecutor in the Criminal Division of the Department of Justice during both Republican and Democratic administrations. As a result, Sussmann is regularly retained by clients with complex cybersecurity matters.
“When Sussmann met with Mr. Baker on behalf of a client, it was not connected to the firm’s representation of the Hillary Clinton Campaign, the DNC or any Political Law Group client.”
Trump, for his part, has vowed to declassify and release classified FISA documents related to surveillance of his campaign.
Fox News' Catherine Herridge contributed to this report.
Source>https://www.foxnews.com/politics/fbi-failed-to-provide-details-on-contact-with-clinton-campaign-lawyer-judicial-watch
Posted by theodore miraldi at 6:25 PM