How We Already Know the Mueller Report FOUND NOTHING on Trump 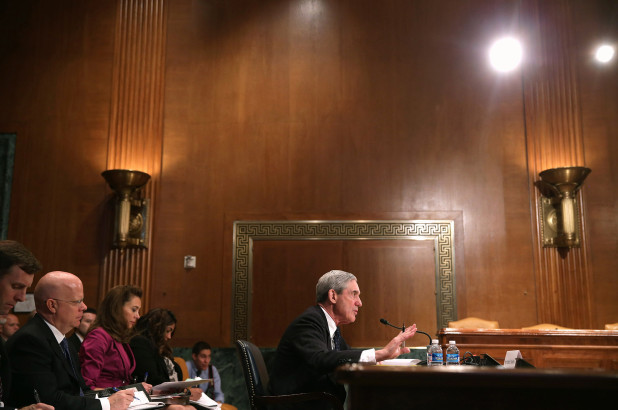 
What began as a serious ­inquiry into a potential world-historical calamity will on Thursday complete its turn into a combination of one of those really bad Washington conspiracy thrillers from the 1970s and ’80s that only a Communist could love.
The release of special counsel Robert Mueller’s redacted report into Russian interference in the 2016 election won’t change the top-line finding of Attorney General William Barr’s four-page summary — namely, that Donald Trump and his campaign didn’t collude or conspire with the Kremlin.
The belief of those who hope the report can still somehow generate an impeachment proceeding rests on details within the report that might suggest the president sought to obstruct justice during the Mueller inquiry.
We all watched as things ­unfolded in real time, and we saw exactly what might indeed have risen to that level — it did appear Trump might have been hinting at pardons for Michael Cohen and Paul Manafort.
But he didn’t pardon them, and they’re both going to jail for a considerable stretch of time.
Some obstruction there! What’s more, it’s clear Cohen was happy to give Mueller anything and ­everything he had on Trump, but what he had didn’t bring the special prosecutor any closer to a finding of collusion, conspiracy or clear obstruction.
We don’t know what Manafort might have said to Mueller or what he might have had on Trump. Again, we all know what the likeliest scenario might have been — that he convinced Trump to help him soft-pedal the language of the Republican 2016 platform in relation to his client, Ukraine.
And yet . . . bupkis. Zip. Zilch. None of Manafort’s many convictions had anything to do with Trump or his work on the Trump campaign.
Clearly, Mueller overturned ­every rock. He threatened to ­indict the conspiracist Jerome Corsi to scare Corsi into cooperating. But Mueller never went through with it, which suggests he didn’t have anything to indict Corsi on and was just bluffing to see if he could get Corsi to spill something Corsi almost certainly doesn’t have. It was just another possible collusion route that turned out to be a dead-end.
And what of Roger Stone and George Papadapoulos and Rick Gates and Michael Flynn and someone you never heard of named Alex van der Zwaan? They were all charged with crimes by Mueller. But those crimes were about their behavior relating to the investigation of Trump, not with anything they did in 2016.
They lied to Mueller or to FBI investigators or to House committees. That’s bad. We don’t even know why they lied. But if they’d lied about Russia, Flynn especially, Mueller would have established a Russia link of some kind. And we know he didn’t.
And that’s the ultimate danger in which the Mueller obsessives are placing themselves and their anti-Trump campaign.
I know there have been prosecutions that have successfully nailed people in this very situation. And there have been appeals that have overturned some of those prosecutions. I also know everybody loves to see someone they loathe get punished. It’s human nature.Elementary fairness requires us all to look plainly at a controversial set of facts in a matter as central as the legitimacy of a presidency and ask what it could possibly mean to obstruct justice in a matter in which there was no originating crime.
But my warning to the Mueller obsessives is this: Digging around in a document that almost certainly doesn’t provide the evidence you hoped it would will backfire on you. You will not look like people searching for the truth but rather like desperate ’49ers panning for gold years after a major investigation proved the vein was bereft of treasure.
If you pull out a sentence or two from the non-redacted parts of the report and then add to those sentences gobs of theory relating to the parts of the report that are redacted, and then devise a whole new set of ideas about how the Mueller report actually does prove Trump obstructed justice, you will make the case for Trump’s “witch hunt” claimbetter than he ever has or ever will.
And you will help get him reelected.
Source>https://nypost.com/2019/04/17/how-we-already-know-the-mueller-report-found-nothing-on-trump/
Posted by theodore miraldi at 10:16 PM