HUD to Crack Down on ILLEGAL Aliens in PUBLIC Housing 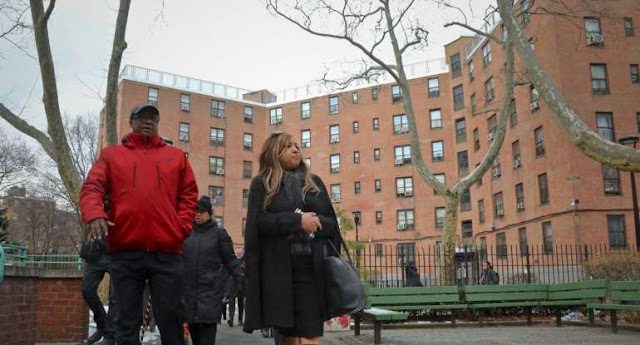 
What's the fairest, most humane way to keep illegal aliens from coming to the U.S. in the first place? Make it absolutely clear that they will be denied services that are reserved for legal aliens and citizens.
That's easier said than done. Hospital emergency rooms cannot check incoming patients to make sure they're legal. By law, they can't turn anyone away for any reason. But many services offered by government can and should be reserved for those who deserve them: legal residents and citizens.
Case in point; public housing. Currently, so-called "mixed families" of legal and illegal immigrants are eligible for public housing assistance. Now the Department of Housing and Urban Development is proposing a new rule that would severely limit that practice.
Daily Caller:

HUD intends to roll out a proposal over the next few weeks that prohibits any illegal immigrant from residing in subsidized housing, even if they are not the direct recipient of the benefit. HUD currently estimates that tens of thousands of HUD-assisted households are headed by non-citizens.
Families who are caught gaming the system by allowing illegal immigrants to stay with them either have to comply with the new rule or they will be forced to move out of their residence.
Households will be screened through the Systematic Alien Verification for Entitlements, or “SAVE,” program.
An administration official told the Caller that this is a continuation of the president’s “America First” policies.

A "zero tolerance" policy of illegals living in public housing makes sense. In effect, an illegal living with legal residents or citizens is hiding from the law. Those who facilitate lawbreaking are as guilty as those who break the law. Therefore, the new HUD policy is fair and equitable given that there are millions of American citizens on a waiting list for housing assistance:

According to  HUD, there are currently  millions of American citizens on the waitlist for government-assisted housing because the department does not have enough resources to provide every eligible family with financial assistance.
The president has repeatedly lamented the drain that illegal immigration has on resources for American families.

I guess it boils down to whether you believe being a citizen of the United States means anything at all. The perks of citizenship mean that you should be ahead in line of those who flout our immigration laws. I don't see any other fair way to do it. Does "fairness" mean giving illegal aliens a leg up in receiving public housing assistance over citizens? In what universe can that be considered "fair"?
Advocates for illegal aliens will call this policy cruel and heartless. I call it fair and equitable. And if illegals know that they will not have a subsidized place to stay if they illegally cross the border, all the better.

Posted by theodore miraldi at 11:51 AM