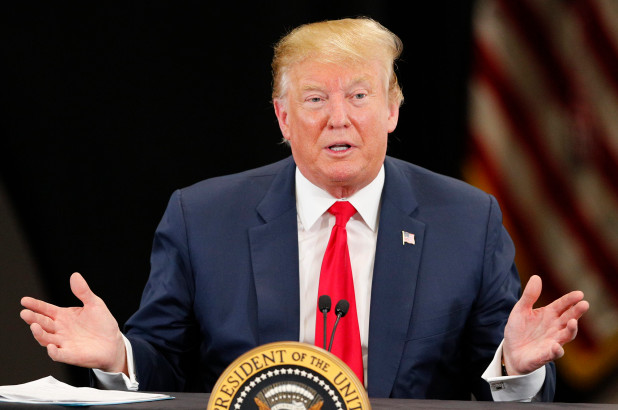 
Mainstream media coverage of the Russia-collusion story has been dead wrong for two years, yet the effort to smear President Trump continues — even after Thursday’s release of the Mueller report.
You’d expect that contrite reporters would explicitly inform the public that the president had been “exonerated.”
Wrong. Take The New York Times, for example. On Thursday, it ran Trump’s quote, “I am f–ked,” quoting the words Trump told former Attorney General Jeff Sessions when the president learned a special counsel had been appointed.
But it spelled out that expletive, rather than use dashes. And it followed a sentence claiming Trump was “seized by paranoia” about what the probe might unearth, making it sound as if Trump was contending that prosecutors were sure to find wrongdoing, when in fact the Mueller report concluded that Trump was talking about the political implications of such an investigation.
“Everyone tells me if you get one of these independent counsels it ruins your presidency,” Trump is quoted as saying. This contention, as many former presidents could probably tell you, was completely reasonable.
Elie Honig at CNN called ­Attorney General William Barr’s description of the report “a staggering exercise in selective omission.” The network also featured Trump-hater and ex-Director of National Intelligence James Clapper bizarrely calling the report “devastating.” Another segment focused on the quite irrelevant point that Team Trump hoped to benefit from Russia’s illegal actions.
Then there was Nicolle Wallace on MSNBC: “We know it wasn’t a criminal conspiracy with the Russians, but then what was it?” she asked. “Because Robert Mueller spent 22 months looking at it, and if there was nothing, I’m pretty sure it wouldn’t have taken 22 months to say nothing.”
I’m pretty sure if Mueller had only spent six months or a year investigating the administration, Wallace would be grousing about how such a short ­inquiry couldn’t possibly be enough time to find out what she, and many others, had determined was true, without any evidence, a long time ago. When you already know the ending, the facts aren’t important.
In a responsible media environment, journalists would be focusing on exoneration rather than theorizing about obstruction, second-guessing Mueller and cherry-picking sentences. Instead, many embraced The Brett Kavanaugh Standard, which states: “Republicans are guilty until proven innocent.”
“Mueller didn’t exonerate Trump on obstruction because he couldn’t,” wrote CNN’s Chris Cillizza. Trump, in fact, was guilty of acting too innocent. “Happy people don’t obstruct justice,” tweeted CNN legal analyst Jeffrey Toobin. “Trump’s frustration at leaks and investigation are evidence of guilt, not innocence.”
If the president hadn’t shown frustration about the concerted effort of the political media, the Democratic Party and officials inside his own administration to frame him as a lackey for a foreign power, what would cable-news legal analysts be saying today? They’d be telling us how Trump’s silence was proof of guilt.
In a responsible media environment, journalists who had been misled by their partisan sources for years would be clamoring to find out how the entire country could be plunged into a 22-month-long destabilizing investigation that amounted to nothing more than a now-debunked conspiracy theory.
Instead, they’re doubling down. And that’s an indictment of their own professionalism.
David Harsanyi is a senior ­editor at The Federalist.
Source>https://nypost.com/2019/04/18/mainstream-media-doubles-down-on-trump-conspiracies/
Posted by theodore miraldi at 9:54 AM