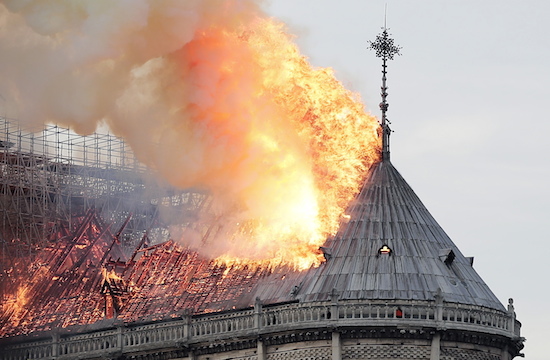 
Former Notre Dame Cathedral architect Benjamin Mouton in a live broadcast April 16 on the French TV network LCI:
When the Fox News Channel’s Shepard Smith hung up on French politician and media analyst Philippe Karsenty during live coverage of the Notre Dame Cathedral blaze, authorities already were speculating the catastrophe that gripped the world was caused by an accident. Philippe Karsenty (Courtesy Philippe Karsenty)
Although speculation is the coin of the cable-news realm, an indignant Smith wanted nothing to do with Karsenty providing context to the April 15 fire – nearly 2,000 attacks on French churches in two years – that would suggest an alternative cause should be considered.
And, in fact, as Karsenty pointed out in an phone interview from France with WND, a former chief architect of the Notre Dame – whose analysis has been virtually ignored – believes the accident theory makes no sense.
Karsenty told WND he was “shocked” when Smith abruptly ended the interview.
“I just wanted to put it in context,” he said, referring to the surge of attacks on churches. “And then I said, nevertheless, the media are lecturing us an hour after it started, saying it can only be unintentional.
“I didn’t say it was a terrorist attack. I didn’t say it was criminal,” Karsenty recalled to WND.
The French media analyst said he couldn’t have imagined such censorship “would happen in the United States.”
“I thought I was with the free-media outlet in the land of freedom. And then I was cut off.”
Karsenty, 52, is the founder of the French media watchdog Media-Ratings and a councilor of the city of Neuilly-sur-Seine, a suburb of Paris.
Among the more recent of the nearly 2,000 attacks on churches in the past two years were a fire in Saint-Sulpice church in Paris, human feces smeared on a wall in Notre-Dame-des-Enfants in Nimes and the vandalization of the organ at Saint-Denis basilica outside the French capital.
Karsenty pointed out that while Paris public prosecutor Rémy Heitz has said from the beginning that he believes the fire was an accident, the former Notre Dame architect, Benjamin Mouton, insists that theory makes no sense.
In a live broadcast April 16 on the French TV network LCI, Mouton explained that the oak timbers that made up the cathedral’s roof had become hardened after more than 800 years and wouldn’t burn easily.
“You would need a lot of kindling to succeed,” said Mouton, who served as the chief architect from 2000 to 2013. “It stupefies me.”
Authorities suspect some type of electrical fire sparked the blaze, but Mouton believes that’s not possible.
“In the ’90s, we updated all the electrical wiring of Notre Dame. So there is no possibility of a short circuit,” he said. “We updated to conform with the contemporary norms, even going very far – all the detection and protection systems against fire in the cathedral.”
Last Thursday, investigators were allowed inside the cathedral for the first time, and a French police official told the New York Times nothing was being ruled out. They are focusing on the possibility of a short-circuit by electrified bells near the spire or cigarette butts left by workers carrying out renovation.
A bells specialist at the French Ministry of Culture, Regis Singer, said it’s plausible that the fire started in the bells in the spire.
But Nicolas Gueury, who electrified another set of bells in the cathedral in 2007, told the Times he thought about that possibility but has ruled it out.
“For me, this would be impossible,” he said, pointing out that numerous redundant safeguards, including circuit breakers and shielding, were installed.
“It was draconian. We tripled the precautions,” he said.
“We were all hyper-prudent. You don’t do just anything in the forest,” he said, referring to the medieval timbers that supported the roof. “It was hyper-securitized.”
A contractor admitted last Wednesday that workers renovating the cathedral flouted a ban on smoking. But he insisted “in no way could a cigarette butt be the cause of the fire at Notre-Dame.”
‘Thank you for telling the truth’
Karsenty is known in France and around the world for charging that the iconic “martyrdom” of the 12-year-old Palestinian boy Muhammad al-Dura in 2000 was a hoax meant to bring condemnation on Israel. A defamation suit by France 2 television and its Middle East correspondent against Karsenty resulted in a decade-long legal battle in which the nation’s highest court in 2012 overturned his conviction. A year later, the Paris Court of Appeals convicted him again. But that same year, an Israeli investigation, presenting video evidence, confirmed his claim that the Palestinians staged the boy’s death.
Nevertheless, to this day many on the left view Karsenty as a “conspiracy theorist,” and Shepard Smith’s treatment of him only solidified that view. Philippe Karsenty (Wikimedia Commons)
After the Fox News interview, Karsenty said, he was “slandered” on French TV and radio while some journalists told him privately they condemned Smith’s behavior.
At an elite club where he is a member along with prime ministers and members of parliament, he said people thanked him for speaking out.
“They said, ‘You were so right on TV. Thank you for telling the truth,” recounted Karsenty.
“People are fed up with the narrative they are telling us,” he said.
Karsenty said he was invited to come on a French TV program after his Fox News interview, but he requested that he be joined by Mouton, who would testify of his belief that the accident theory is unlikely, if not impossible.
Mouton declined, however, explaining he was in Shanghai, where he is a professor at Tongji University. And he hasn’t appeared on French television since the April 16 interview.
‘I thought I could go straight to the point’
Karsenty told WND he was not familiar with Shepard Smith and the news anchor’s reputation as a left-leaning counter to the network’s conservative commentators and hosts.
“To me, I was talking to Fox News. If I were on CNN or any other media outlet, I would have been more careful to bring the story,” he said.
“I thought I could go straight to the point of what was happening. I was shocked. It had never happened to me before anywhere in the world, to be cut off,” said Karsenty.
Smith interrupted his guest in the April 15 interview when after mentioning the church attacks, Karsenty said, “Of course you will hear the political correctness, that it’s probably an accident, but … ”
“Sir, sir, sir, we’re not going to speculate here of the cause of something that we don’t know,” Smith interjected. “If you have observations or you know something, we would love to hear it.”
Karsenty continued: “I’m just telling you you need to be ready …”
“No, sir. We’re not doing that here,” Smith declared. “Not now. Not on my watch! Philippe Karsenty, it’s very good of you to be here.”
See the Fox News interview:
Challenging the conventional narrative
Karsenty observed a pattern in such incidents – particularly if it might have something to do with Islam – of authorities, without having investigated, immediately telling the public it was an accident.
“If you come out and say, ‘Wait a minute, there may be another explanation,’ it’s not [allowed],” he said.
“You don’t have the right to think freely.”

The al-Dura affair echoes the Fox News interview, Karsenty acknowledged, in its challenge to a narrative staunchly held by information gatekeepers.
The images aired by France 2 of the father and son purportedly under fire from Israeli soldiers became a rallying cry for the 2000 Intifada against Israel. Postage stamps in the Middle East bore the images. And images of the boy could be seen in the background when Jewish-American journalist Daniel Pearl was beheaded by al-Qaida jihadists in 2002.
Karsenty said that even after video evidence was presented showing the incident was a hoax, French courts argued that he didn’t possess that evidence at the time he made the claim in the 2004 article that provoked the case.
It seems, he said, that he was found guilty of being “too intuitive.”
In a September 2013 interview with New English Review, Karsenty said France 2 television, French officials and the French Association of Journalists didn’t care about the facts.
“They have a faith. Their faith is that the state of Israel is guilty of killing children. They also have a political objective which is to make the state of Israel guilty,” he said.
“Anytime I’m in front of someone who has a decent brain and who is open-minded, when I show him the pieces of evidence he agrees and says of course it’s a hoax.”
Source>https://www.wnd.com/2019/04/notre-dame-architect-blaze-was-no-accident/#UVW5fx4tRu1JrSUK.99
Posted by theodore miraldi at 7:39 PM