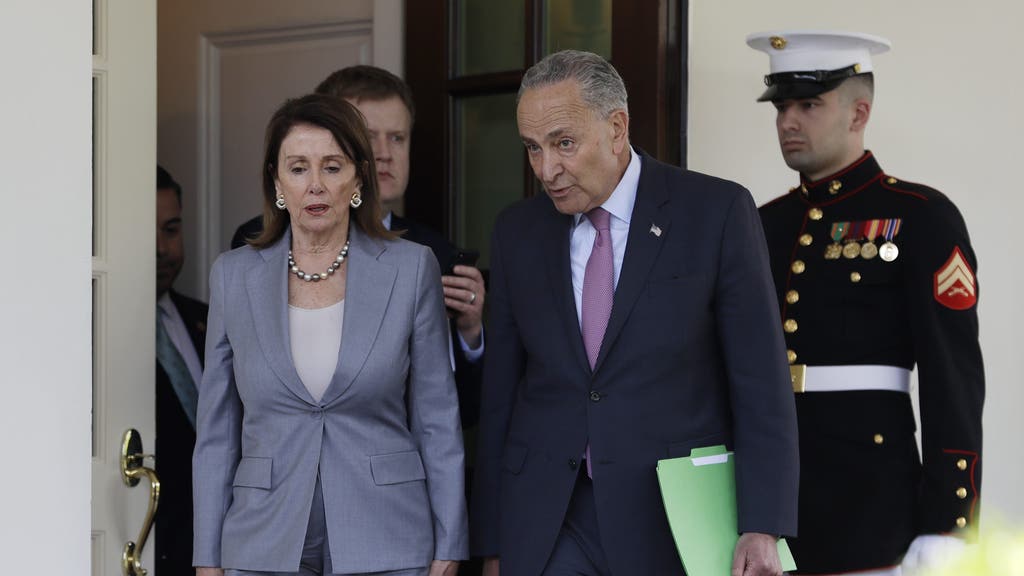 
Senate Democratic Leader Chuck Schumer said Tuesday that President Trump agreed to support a $2 trillion infrastructure spending package after meeting with him and other Democrats at the White House, though the details are not yet clear.
The president – a real estate developer before he was elected president – has long sought to strike a big infrastructure deal, but has faced some resistance from conservatives in his party over concerns about the country’s rising debt.
Democratic leaders, speaking to reporters outside the White House after meeting with Trump, called the meeting constructive.
PELOSI, SCHUMER EYE ‘MASSIVE’ INFRASTRUCTURE PACKAGE
“We agreed on a number – which was very, very good. Two trillion dollars for infrastructure. Originally, we started a little lower. Even the president was eager to push it up to two trillion dollars,” Schumer said.
The White House, in a written statement on the meeting, did not mention a dollar figure but called the session "excellent and productive."
"The United States has not come even close to properly investing in infrastructure for many years, foolishly prioritizing the interests of other countries over our own. We have to invest in this country’s future and bring our infrastructure to a level better than it has ever been before," the White House said, adding that the group would meet again in three weeks "to discuss specific proposals and financing methods."
House Speaker Nancy Pelosi said there were no decisions on how to pay for the plan.
“We agreed that we would meet again to talk about how it would be paid for,” she said.

Video
Both Schumer and Pelosi said they believe they can strike a deal with Trump on infrastructure, even as congressional Democrats ramp up investigations of the president and subpoena members of his administration in the wake of the release of Special Counsel Robert Mueller's Russia report.
"I believe we can do both at once,” Schumer said, adding they aren’t “mutually exclusive”
“Building infrastructure of America has never been a partisan issue,” Pelosi said, saying Democrats “hope to go forward in a very nonpartisan way for the future.”
TRUMP VOWS TO FIGHT ALL SUBPOENAS AGAINST ADMINISTRATION
Ahead of the session with Democrats, one of the president's economic advisers said the White House would not be going into Tuesday's meeting with a blueprint for an infrastructure bill.
"We're going slowly on this," said Larry Kudlow, director of the president's National Economic Council. "We would like this to be bipartisan. We would like to work with them and come up with something both sides can agree to. It's an important topic."
Questions remain on how such a plan would be funded. The nation's top business groups and labor unions support increasing the federal tax, currently 18.3 cents a gallon since it was last raised in 1993.
Asked whether Trump supports raising the gas tax, White House adviser Kellyanne Conway said: "This president is the guy who lowers taxes."
Conway acknowledged that "there's no question" that infrastructure repairs need to be paid for.
Pelosi and Schumer wrote in a letter to Trump on Monday that an infrastructure package should go beyond addressing roads and bridges and should also include provisions to enhance broadband, water systems, energy, schools and housing.
The Associated Press contributed to this report.
Source>https://www.foxnews.com/politics/schumer-trump-agreed-to-2-trillion-for-infrastructure-after-meeting-with-dems
Posted by theodore miraldi at 2:19 PM