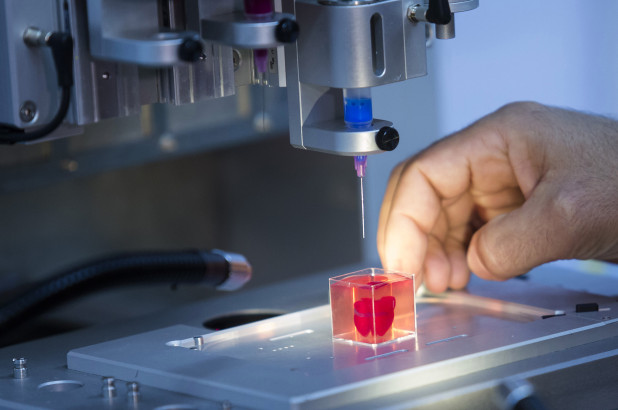 Tal Dvir holds a 3D printed heart made from human tissue in his laboratory in Tel Aviv University, Getty Images

A team of Israeli scientists used a 3-D printer to create an entire human heart — a stunning achievement that could change the world of medicine by ending the reliance on donated organs, according to a study published Monday.
The world’s first “printed heart” was made with actual human biological material, although only about the size of a rabbit’s heart, making it too small for a human, researchers said in the Advanced Science report. But the achievement demonstrates the potential for being able to 3-D print full-sized organs one day, the research team told The Jerusalem Post.
“This is the first time anyone anywhere has successfully engineered and printed an entire heart replete with cells, blood vessels, ventricles and chambers,” the team’s lead researcher, Professor Tal Dvir of Tel Aviv University, told the news outlet.
“People have managed to 3D-print the structure of a heart in the past, but not with cells or with blood vessels. Our results demonstrate the potential of our approach for engineering personalized tissue and organ replacement in the future.”
The team took fatty tissue from patients and reprogrammed some of it into stem cells, the study said. Those cells were then differentiated into cardiac and endothelial cells, which make up the lining of blood vessels, starting the process.
Dvir’s team said larger hearts could be developed using this same process. The use of “native” human material was imperative to the successful creation of the tissues and organs, the team said.
The inspiration for the study was both Israel’s and the United States’s issue with heart disease, the leading cause of death for men and women in the US and the second leading cause in Israel.
The researchers noted that heart transplants are the only form of treatment for people with end-stage heart failure and that many sick people die while waiting for a transplant, which can take six months or more.
The research team said the next step will be to train the printed heart to act like an organic human heart by transplanting them into animals and eventually, humans. They hope in the next 10 years, organ printers will be in hospitals “around the world” and the procedures will be a routine practice.
Source>https://nypost.com/2019/04/15/scientists-create-entire-human-heart-with-3-d-printer-for-the-first-time/
Posted by theodore miraldi at 8:06 AM