What Did Marx and Engels Think of Other Races?

The current outbreak of anti-Semitism in the Democratic Party should not come as a big surprise. The Left has a long history of xenophobic behavior. 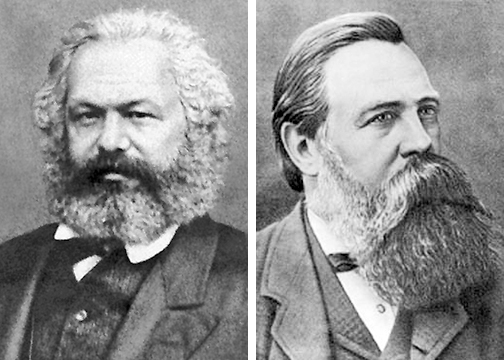 How Unfortunate that Socialism's most forceful narrative is HATE!!...tmiraldi

For over 150 years, proponents of socialism have been perceived as adherents of internationalism and carriers of societal moral authority. However, where did this perception come from, and how did it come about? Does perception constitute reality? The answers to these questions must be sought in the works of the classics of the different currents of socialism and real policies of socialist parties and regimes. However, in the framework of this article, we will focus mostly on Marxism.

Neither Marx nor Engels had specialized works dedicated to the issue of nations and races. Instead, there were plenty of sketchy phrases and thoughts articulated in various newspaper articles, letters, and private conversations. Because of this, some scholars hold the position that the founders of Marxism did not have a coherent approach to national problems. Others admitted to a lack of dedicated work on this problem but argued that the founders' views could be easily derived from the general tenets of their materialist conception of history. As often happens in science, both points of view happened to be correct.

Scholars do not dispute the obvious fact that the founders of Marxism trivially expressed a derogatory attitude toward certain nations and persons. They frequently used ethnic slurs while addressing political events or simply discussing other people. Reading some of Marx's and Engels's expressions causes not only frightened astonishment, but also sincere disgust. Here are some of the pearls from the pen of Marx and Engels.

About the Chinese: "It would seem as though history had first to make this whole people drunk before it could raise them out of their hereditary stupidity." (MECW, Vol. 9, p. 99)

About Mexicans: "The Spaniards are indeed degenerate. But a degenerate Spaniard, a Mexican that is the ideal." (MECW, Vol. 29, p. 347)

About Scandinavians: "Obviously, the more primitive a nation is, the more 'scandinavian' it must be." (MECW, Vol.7, p. 422)

Both founders of Marxism looked down even on their fellow socialists, especially if there were disagreements between them on some issues. The most infamous example is the characterization of Ferdinand Lassalle behind his back as a "Jewish nigger." Thus, Marx wrote to Engels, "It is now perfectly clear to me that, as testified by his cranial formation and hair growth, he is descended from the negroes who joined Moses's exodus from Egypt (unless his paternal mother or grandmother was crossed with a nigger). ... Well, this combination of Jewish and Germanic stock with the negroid basic substance is bound to yield a strange product." (MECW, Vol. 30, p. 210)

Humanity has long chosen a manifestation of anti-Semitism as an indicator by which one can judge the intellectual and moral qualities of an individual. Marx did not pass this simple test. Even though he was of rabbinical descent on both sides of his family, Marx was a rabid anti-Semite. Marx's contempt for his fellow Hebrews was profound. In his despicable pamphlet, A World without Jews, Marx repeated all low-grade, xenophobic stereotypes attributed to Jews by typical anti-Semites. Here are just a few snippets of his "deep" philosophical thoughts:

"Money is the zealous one God of Israel, besides which no other God may stand."

This book could take a "worthy" place on a shelf of any rank-and-file anti-Semite along with Hitler's Mein Kampf and the Russian-French Protocols of the Elders of Zion.

In the introduction to the English edition of that book, Dagobert D. Runes accurately noted that "[t]he identification of Judaism with usury and exploitation of the masses, combined with an alleged secret master plan of Jews with headquarters in Jerusalem to dominate the rest of the world, has been, and still is, the fundamental platform of political anti-Semitism."

Marx and Engels did not hide their bigoted views toward non-Westerners: Mexicans, Creoles, Africans, Indians, and Chinese, to name a few. They shared the same attitude toward people of color as ordinary supremacists. Specific hatred was targeted at the Slavic people by Marx. His notorious Russophobia was probably formed and crystallized at the time of heated debates with Russian anarchist Bakunin. Their mutual hostility to each other and quarrels eventually led to the dismantling of the First International.

Originators of Marxism adhered to the Hegelian concept of "historic" and "non-historic" nations. Hegel linked nationhood with the tradition of statehood. He considered nations with no state formations as those that do not have a history. For him, "non-historic" people are backward beings destined to be phased out from human history eventually. While discussing national issues in the Habsburg monarchy during the revolutions of 1848-49, Engels followed in the footsteps of Hegel and divided nations of the monarchy into "historical" (Germans, Poles, Magyars) and "non-historical" (Czechs, Slovaks, South Slavs, Ukrainians). "Non-historic" nations did not follow the exact tenets of the Marxian materialist conception of history, and because of this, they were considered counterrevolutionary. It is not a stretch to argue that such a personal chauvinist attitude of the founders of Marxism toward other people left its imprint on the theory in total. Marxism was not intended for everyone; on the contrary, a perfect communist paradise was envisioned only for a few elite nations.

Bearing in mind the chauvinism of Marx and Engels, one may ask: why, then, have they been perceived as internationalists, and consequently, why is Marxism considered an internationalist political philosophy? Such a conclusion was derived mainly from the famous lines of the Communist Manifesto: "The working men have no country" and "Proletariat of all countries, unite!" These slogans were logical derivatives of Marxian historical materialism. It is worth reiterating that the revolution that Marxism envisioned was not meant to be a national phenomenon, but would nonetheless have a universal range. Thus, Engels rationalized, "by creating the world market, big industry has already brought all the peoples of the Earth, and especially the civilized peoples, into such close relation with one another that none is independent of what happens to the others."

Therefore, first and foremost, it is capital that does not have borders, as capital establishes trade relations and encourages an international division of labor and cooperation. It is capitalism and entrepreneurs who are genuinely international. At the time of Marx, labor was primarily local, but capital became global. Marx acknowledged this dichotomy and realized that the worldwide communist revolution is dependent on international cooperation among the proletariat. They wanted the proletariat to follow the steps of capital and create international institutions that represented labor. Therefore, Marxian proletarian internationalism was derived from the international nature of capitalism. It was a necessary condition for the victory of communism on a global level (for historical nations). Marx and Engels became internationalists in order to conform to the outline of their theory.

Marxian internationalism was not derived from the outstanding moral qualities, impeccable reputation, humanity, and love of people of various ethnic backgrounds of the founders of Marxism. It was a necessary measure to confront true internationalists — entrepreneurs working in the framework of the market economy to economically unite various corners of the Earth.

Communists of the Soviet Union proclaimed themselves to be ardent internationalists. However, there are many skeletons in the communist closet. Faithful Leninists carried out a policy of coerced russification: they closed national schools, newspapers, magazines, and houses of worship. The Soviet regime repressed Don Cossacks; it deported Poles, Ukrainians, Moldovans, and people from the Baltic states; it resettled Volga Germans, Crimean Tatars, Chechens, and Ingush to other territories; it starved to death four million Ukrainians during the Holodomor; it was outright anti-Semitic as well. Only Stalin's death saved Soviet Jewry from a genocide that could match the Nazi one. Subsequent communist leaders continued anti-Semitic policies on a state level, not to mention inciting domestic anti-Semitism. The free capitalist world fought the bigoted policy of the Soviets, and eventually, Jews were allowed to leave the Soviet Union for good.

Therefore, to answer the questions at the beginning of the article, we can tell that the supposed internationalism of the Left is not its integral and genuine moral characteristic. Some currents of socialism preached outright chauvinism; others used internationalist rhetoric in order to gain political benefits. The current outbreak of anti-Semitism in the Democratic Party should not come as a big surprise, as the Left has a long history of xenophobic behavior.

Posted by theodore miraldi at 7:57 AM