Joseph A. Wulfsohn
Former Secretary of State Hillary Clinton on Wednesday criticized the Mueller Report and imagined a scenario where a Democratic presidential hopeful called on China to "get" President Trump's tax returns.


The eyebrow-raising theory came during an interview on MSNBC's "The Rachel Maddow Show." The conversation was largely dedicated to Maddow and Clinton comparing problems they found with Attorney General Bill Barr's hearing in front of the Senate Judiciary Committee earlier in the day.
Clinton ripped Senate Republicans for not passing bipartisan legislation that was meant to take action against foreign interference in elections in the future "under orders from the White House." The two-time presidential candidate-- in an apparent effort to show the preposterousness of it all-- then offered a hypothetical situation where a Democrat running in 2020 blatantly makes an appeal to a foreign country to help with the election.
"Imagine, Rachel, that you had one of the Democratic nominees for 2020 on your show and that person said, 'You know, the only other adversary of ours who's anywhere near as good as the Russians is China. So why should Russia have all the fun? And since Russia is clearly backing Republicans, why don't we ask China to back us?... And not only that, China, if you're listening, why don't you get Trump's tax returns. I'm sure our media would richly reward you," she theorized. 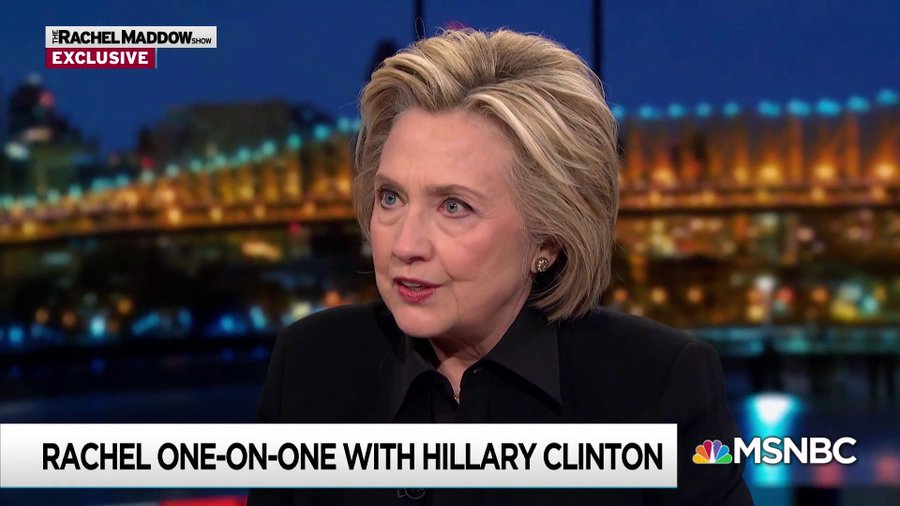 Here is Hillary Clinton's hypothetical about a candidate calling on China to hack Trump's taxes, and why Republicans putting partisanship over national security is a dangerous thing.

Twitter Ads info and privacy
Clinton said-- according to the Mueller report-- that it would not be a conspiracy because it is done openly. She theorized that the IRS offices would be bombarded with cyber attacks and a new Wikileaks would emerge that could release the information.
"Nothing wrong with that," Clinton sarcastically said.
Source>https://www.foxnews.com/politics/clinton-knocks-mueller-for-finding-no-conspiracy-what-if-dems-ask-china-for-trumps-tax-returns
Posted by theodore miraldi at 3:43 PM