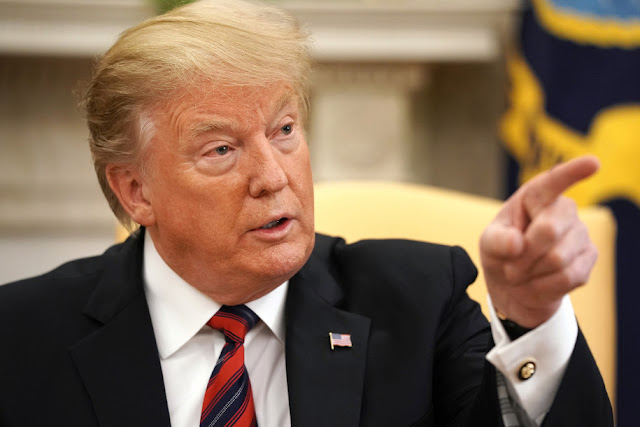 
They’ve done it, they’ve finally done it! The New York Times has picked up the scent of the scandalous spying on Donald Trump’s 2016 campaign and is joining the hunt for the truth.
That’s how the president and some supporters reacted after the Times reported the FBI sent a “cloaked investigator” to a London meeting with Trump aide George Papadopoulos in September of 2016. The cheering section saw the story as evidence that, in the aftermath of special counsel Robert Mueller’s report, the facts were forcing even the Gray Lady to abandon its notorious anti-Trump agenda.
If only that were true. In reality, we’ll see pigs fly before we see the Times fully committed to getting to the bottom of what Trump calls ­“Spygate.”
The paper is still defending the dirty tricks of Barack Obama’s White House and its own role in spreading the Russia, Russia, Russia hysteria. It’s a relationship neither side can quit.
Instead of proving the Times is coming to its senses, Friday’s article about the 2016 London meeting is better seen as spin designed to protect deep-state sources feeling the heat. Attorney General Bill Barr’s promise to investigate the investigators spooked them and they are using their favorite media handmaiden to fight back.
The result is a story that takes a “modified limited hangout” approach, where fragments are presented as revelations while the full picture ­remains artfully hidden.
Although the front-page story identifies the investigator as Azra Turk, nowhere do we learn what Turk’s real name is or whom she works for.
The story repeatedly suggests she is an FBI agent, but the fact that it doesn’t say so directly probably means she isn’t. Indeed, one of the story’s three reporters, Adam Goldman, told CNN they called Turk a government investigator “for a reason, and I’m going to leave it at that.”
That’s not journalism. That’s being a deep-state errand boy.
Naturally, all sources are anonymous, identified generally as “people familiar with the operation.” My guess is they include Jim Comey, Andrew McCabe and other dirty cops worried they are in Barr’s crosshairs.
They should worry, especially about Barr’s probe into leaks. There is no question that FBI officials were among the same reporters’ sources all along as the Times painted Trump as a Russian agent.

Which is why Friday’s story assures readers there was nothing amiss in the spying, arguing that the existence of an “operation aimed at a presidential campaign” reveals “the level of alarm inside the FBI” over Russian ­efforts to disrupt the 2016 election.
That’s an odd and extremely biased way to describe the possibly illegal ­effort by the Obama administration to spy on the presidential campaign of the opposition party. Imagine how that sentence would be written if a Republican president spied on a Democratic candidate.
And why are the reporters certain the spying was legitimate and not a plot to stop Trump from being elected? Because their sources say so, making this a powerful example of why the Times was wrong to abolish its standards.
For decades, editors there insisted that sources making pejorative claims must be identified so readers could judge their agenda and credibility. By keeping sources anonymous, the Times keeps readers in the dark.
In this case, that’s the aim.
As for the word “spying,” the paper won’t go there, even as Barr makes a point of using it. The hypocrisy is shameless.
On Adam Goldman’s bio, the Times says he was on an Associated Press team that won a Pulitzer Prize for revealing “the New York Police Department’s Muslim spying programs.”
See, the Times doesn’t like the NYPD, so cops were “spying.” When Obama does it to Trump, it’s an “operation.”
As for Azra Turk, the article merely catches up to what Papadopoulos already revealed. His memoir, “Deep State Target,” was published in March and he was the first to identify her, describing her as a “suggestive” honey pot “showing her curves” as she pumps him for information about whether Trump’s campaign had ties to Russians.
Papadopoulos also makes a key point the Times doesn’t: He believes Turk is with the CIA, which adds a huge dimension to the scandal. Imagine that headline: “Obama’s CIA also spied on Trump.”
Paging John Brennan, your time in the barrel is coming.
Two final points:
The Times first reported the FBI’s 2016 contact with Papadopoulos in May of 2018, when the paper, along with The Washington Post, simultaneously revealed the bureau sent an “informant” to talk to two Trump aides after the agency “received evidence that the pair had suspicious contacts linked to Russia.”
The fact that both papers had the same story reflects that it, like Friday’s piece, was a defensive leak orchestrated by nervous insiders. And no wonder: Trump was tweeting back then that there was “at least one FBI representative implanted, for political purposes, into my campaign.”

In response, the Times essentially admitted it was true, but protected the operation with the ridiculous assertions that “No evidence has emerged that the informant acted improperly” and that the FBI used informants only because agents were “leery of disrupting the presidential campaign again” after the Hillary Clinton e-mail probe.
In other words, they sent a secret informant for Trump’s own good. This is the same FBI that wrote a letter clearing Clinton before she was interviewed.
Curiously, neither the Times nor The Washington Post identified the informant a year ago, but others quickly named him as Stefan Halper, a Cambridge professor with ties to American and British intelligence.
The Times said it was shielding his identity to protect his safety. It also casually added that in his meeting with Papadopoulos, the informant was accompanied by “one of his assistants, a young woman.”
Now the paper says the woman was not an assistant, but rather a “government investigator.”
What did the Times know about Azra Turk and when did it know it? And what else is it hiding about her?
Friday’s story also had a very odd ending. In a dramatically downplayed conclusion, it says Halper “was invited as part of a group of China experts to meet with White House advisers in 2017. Mr. Halper informed the FBI of the invitation but was not provided with any guidance, people familiar with the episode said.”
In plain English, the FBI informant who helped spy on the Trump campaign was unwittingly invited to the White House during Trump’s presidency, and the FBI told him to go but never notified the president.
The story adds that Halper’s group met with trade representative Peter Navarro, who later told Fox radio he felt “duped” by Halper’s betrayal.
Navarro shouldn’t be too hard on himself. The FBI and the CIA duped the nation, and still refuse to come clean about what they did in 2016 and 2017.
As for The New York Times, we shouldn’t expect to find the truth there, either. The former “paper of rec­ord” is protecting those who did the duping and the spying.
Source>https://nypost.com/2019/05/04/did-the-ny-times-just-admit-and-defend-obamas-spying-on-trump/
Posted by theodore miraldi at 9:29 AM