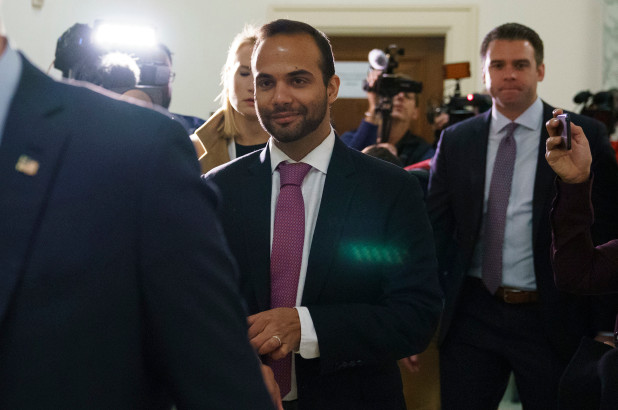 
The “sexy bottle blonde” woman whom a former Trump campaign adviser says came on to him in a London bar was sent there by the FBI to investigate suspected campaign collusion with Russia, according to a new report Thursday.
The woman, who used the name Azra Turk, was working for the feds when she posed as a research assistant who wanted to discuss foreign policy with Trump adviser George Papadopoulos, the New York Times said.
Turk, whose real name is unknown, traveled to London to work with Cambridge University professor Stefan Halper, a longtime FBI informant whom the feds had told to set up a meeting with Papadopoulos, according to the Times.
But the feds learned nothing of value when Papadopoulos and Turk had drinks on Sept. 15, 2016, or when Papadopoulos later met with Halper at the Sofitel hotel in London’s West End, and Turk returned to the US, the Times said.
The revelation of the FBI’s role in arranging the meetings came amid claims by Trump and his supporters that US officials under then-President Barack Obama spied on his campaign.
Last month, Attorney General William Barr told a Congressional committee that he thought “spying did occur” and that he’d be looking into the “genesis” of the FBI probe that was later taken over by special counsel Robert Mueller.
Justice Department Inspector Gen. Michael Horowitz is conducting an internal investigation of the FBI’s activities that could wrap up as early as this month.
During a closed-door interview with members of Congress last year, Papadopoulos described Turk as a “beautiful young lady” who seemed willing to trade sex for information.
Turk “never explicitly said I will sleep with you for this, but her mannerisms and her behavior suggested that she was flirtatious, and she was very open to something like that if I ended up providing what she wanted, whatever that was,” Papadopoulos told the lawmakers.
Papadopoulos — who later served 12 days in prison for lying to the FBI about his contacts with Russian intermediaries during the campaign — also expanded on his encounter with Turk in his memoir, “Deep State Target,” published in March.
In the book, Papadopoulos recounts how Turk contacted him shortly after he arrived in London by sending a text message that said, “Let’s meet for a drink. I’m looking forward to meeting you.”
Papadopoulos said he wasn’t sure if the message was “suggestive” until he arrived at the bar Turk had picked out for them.
“It was definitely suggestive. Azra Turk is a vision right out of central casting for a spy flick. She’s a sexy bottle blonde in her thirties, and she isn’t shy about showing her curves—as if anyone could miss them. She’s a fantasy’s fantasy,” he wrote.
But within five minutes, the book says, Turk began grilling Papadopoulos about the Trump campaign.
“She wants to know: are we working with Russia? ‘I don’t know what you are talking about,’ I say with a nervous laugh — her question is creepy,” he wrote.

Trump aide who lied to FBI plans to run for office

But Turk “keeps pushing” and puts her hand on Papadopoulos” arm, telling him he’s more attractive than his pictures suggest and that he’s “doing important work,” Papadopoulos wrote.
“I’d love to hear more about the campaign. It is such a fascinating subject. How is Trump going to win? How can he beat Hillary Clinton?” he recalls her saying.
Convinced she’s not really a research assistant, Papadopoulos waited until they finished their drinks and said goodbye, he wrote.
Shortly after the Times story was posted online Thursday, Papadopoulos re-tweeted a link to it.
“I agree with everything in this superb article except ‘Azra Turk’ clearly was not FBI,” he wrote.
“She was CIA and affiliated with Turkish intel. She could hardly speak English and was tasked to meet me about my work in the energy sector offshore Israel/Cyprus which Turkey was competing with.”
Source>https://nypost.com/2019/05/02/fbi-sent-a-blonde-bombshell-to-meet-trump-aide-papadopoulos-report/
Posted by theodore miraldi at 7:13 PM