IRAN COLLUSION? How Is This NOT Colluding With America’s ENEMIES? 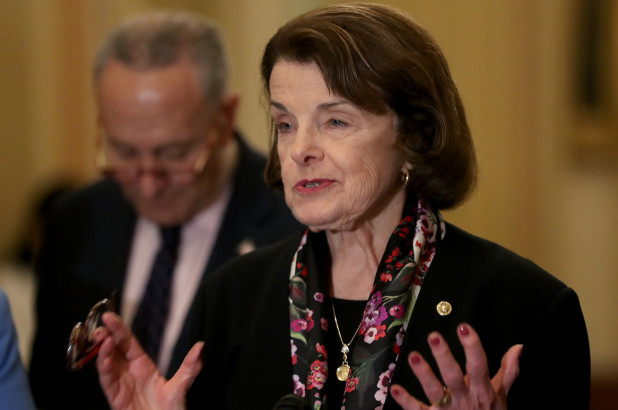 
Imagine, for a moment, what the political reaction would be if a leading Republican senator met with an antagonistic foreign power, say Russia, in the midst of high-tension standoff between President Joe Biden and Vladimir Putin?
Such a scenario seems nearly ­inconceivable. Yet, it’s exactly the situation Sen. Dianne Feinstein created when hosting Iranian Foreign Minister Javad Zarif for dinner a few weeks ago.

Dianne Feinstein had dinner meeting with Iranian minister amid US tensions

Politico reported on the meeting, noting that it was “a bit unusual” for a former chair of the Intelligence Committee and a member of the Senate minority to dine out with the acting foreign minister of an adversary of the United States. And by “unusual,” Politico meant completely unprecedented.
Actually, my imaginary set-up doesn’t really do the Feinstein dinner justice. Iran isn’t merely a rival of the United States — like, say, Russia — but a violent and active enemy. Like Russia, Iran has long been hacking into US institutions. But the Islamic regime, according to the past two administrations, is also responsible for the death of hundreds of American service members in Iraq.
Add to that the fact that the ruling mullahs have not only undermined US interests by attacking and threatening our allies through their proxies in Lebanon, Yemen and elsewhere, but they’ve funded terror groups like Hamas, which is directly responsible for the murder of American citizens.
Feinstein isn’t merely just any senator, either. She is one of the leading proponents of reinstituting the Obama administration’s failed Iran deal. Only recently the California senator blamed the Trump ­administration, rather than Iranian mullahs who’ve spent years taking Americans hostages and threatening our friends, of “increasing the chances of an unnecessary military conflict with Iran.”
Well, President Trump — not to mention nearly every GOP member of the majority in the Senate — has supported withdrawing from (or renegotiating) the Joint Comprehensive Plan of Action. And so he did.
Though Democrats have yet to come to terms with the harsh reality of a President Trump, negotiating deals with foreign powers is his jurisdiction. And, though the Obama administration regularly circumvented this process, the Senate’s job is ratify or reject those deals.
So while it’s one thing to debate the merits of foreign policy domestically — not only acceptable but essential in matters of potential conflict — it’s quite another for an opposition senator to shadow negotiate with a foreign minister who recently “warned” the United States on CNN and demanded our “respect.”
Feinstein’s rendezvous with Zarif comes at a time when the two nations are in a precarious stand-off. The United States, which recently designated the Iranian Revolutionary Guards as a foreign terrorist organization, has deployed bombers and an aircraft carrier to the Persian Gulf. US troops are now in a danger’s way. What if Feinstein and the administration are sending conflicting messages?
Now, the California senator isn’t the only member of the pro-Iran faction in American political life willing to meet with the enemy. Former Secretary of State John Kerry has admitted to repeatedly meeting Zarif and other top Iranian officials in hopes of salvaging the nuclear deal, despite the will of the American people. There is simply no comparable historical example of a former high ranking official going abroad to engage in this kind of effort.
The political media, which act as if every contact the Trump administration has ever had with a Russian-speaking person is potential act of sedition, doesn’t seem particularly concerned about the ­unusual Zarif meeting.
Perhaps when there’s a chance, though, someone with access can ask Feinstein what she told the Iranians. Did she share specifics about her faction’s efforts to undermine the executive branch? Did she tell the Iranians to wait out the Trump administration for a Democratic president who will once again kowtow to them? Did she tell Zarif that Democrats would possess more flexibility once the next election was over?
And, if the Trump administration was OK with the Feinstein meeting, as the senator claims, it, too, should explain why. Otherwise it’s only helping create a precedent that ­undermines every future president in every future negotiation.
Source>https://nypost.com/2019/05/23/how-is-this-not-colluding-with-americas-enemies/
Posted by theodore miraldi at 8:53 AM