Rashida Tlaib: Friend Told Her To Speak To 'RACIST IDIOTS' At Fourth-Grade Level 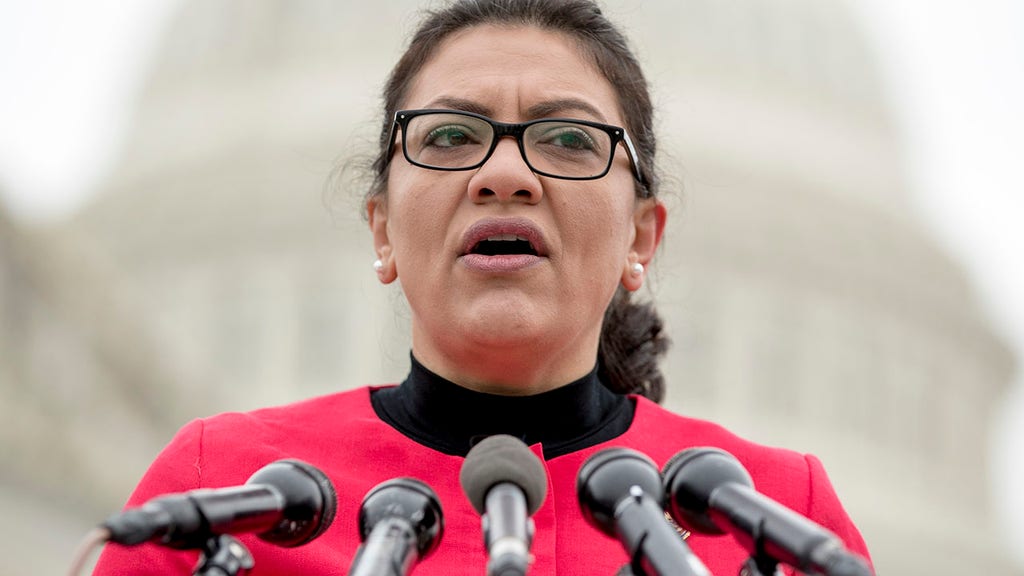 
Rep. Rashida Tlaib, D-Mich, doubled down on her controversial remarks about having a "calming feeling" whenever she thinks that Palestinians created a "safe haven for Jews" after the Holocaust during her appearance on "Late Night with Seth Meyers" on Monday night, suggesting that she should be speaking to "racist idiots" at a fourth-grade level.
Last week, Tlaib drew backlash for comments she made during a Yahoo News podcast interview, where critics accused her of saying that the WWII genocide of six million Jews gave her a "calming feeling" as well as offering revisionist history for claiming that Palestinians welcomed Jews to the Middle East when Palestinian leader Grand Mufti Haj Amin el Husseini was actually an ally of Adolph Hitler and met with the dictator in 1941.
RASHIDA TLAIB SLAMMED BY HOUSE GOP OVER COMMENTS ON HOLOCAUST, PALESTINIANS
Tlaib began by explaining to "Late Night" host Seth Meyers that her grandmother lives in the West Bank, which she referred to as "the occupied territories of Palestine" and how many of her ancestors "died" or "gave up their livelihood" to provide that safe haven for Jews, which she wanted to "recognize and honor."
"I want all of us to feel safe. All of us deserve human dignity, no matter our backgrounds, no matter our ethnicity, no matter even our political opinions, we all deserve that kind of equality and justice. And, you know, for me, I wanted to uplift that and bring that to light and it was unfortunate," Tlaib explained. "You know, I got a text from a friend who's like, 'Hey, next time, you know, really clarify. Maybe talk like a fourth grader because maybe the racist idiots would understand you better.'"
"I will continue to speak truth to power and continue to uplift my grandmother through love and that's all I can do is continue to share the human impact of what it means to be a Palestinian in the occupied territory," the freshman congresswoman added.
Seth Meyers responded by saying it "wouldn't hurt" if everyone spoke on a "fourth-grade level" about the complex history of the Israeli-Palestinian conflict. He also told Tlaib that there's a "bad-faith argument" regarding the notioned that she was "calmed" by the Holocaust, but mentioned that there was a "good-faith argument" that her history was "not in alignment with everyone else."
Tlaib was widely condemned by GOP lawmakers as well as President Trump, who accused her of "tremendous hatred," and was widely defended by Democratic lawmakers including House Speaker Nancy Pelosi, D-Calif, who called the "smear" attempt "outrageous."
Source>https://www.foxnews.com/politics/rashida-tlaib-hits-critics-over-holocaust-remarks-maybe-i-should-speak-at-a-4th-grade-level-to-racist-idiots
Posted by theodore miraldi at 8:15 AM