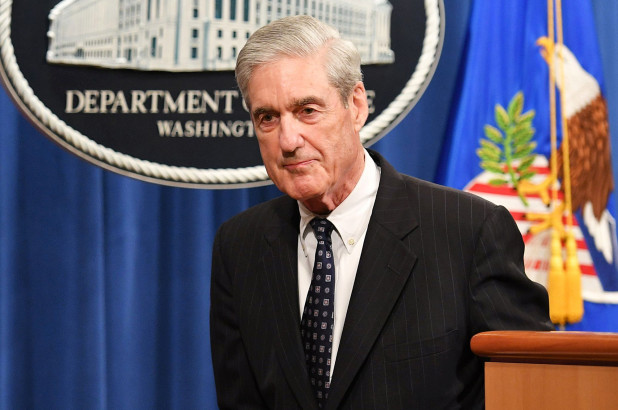 
Special prosecutor Robert Mueller’s statement upon the shuttering of his two-year investigation into the Trump campaign was weird even by the standards of the weirdness of the past couple of years. “Charging the president with a crime was not something we could consider,” he reported. Indeed, even pursuing that question, he added, would have been unconstitutional under long-standing Justice Department guidelines.
But then he said that if his office could have exonerated the president, it would have: “If we had confidence the president clearly did not commit a crime, we would have said so.”
Granted, he said pretty much the same thing in the report he produced: “If we had confidence after a thorough investigation of the facts that the president clearly did not commit obstruction of justice, we would so state.”
His statement was only 8 minutes long. The report is 400 pages long. It matters what he chose to repeat from it and what he did not. He wanted the American people to hear him speak those words. He wanted to emphasize this point.
The “I couldn’t exonerate him” point is discomfiting for another reason, which is: Since when do prosecutors exonerate people? That isn’t a prosecutor’s job. Maybe in the aftermath of a wrongful conviction, with irrefutable physical evidence, prosecutors will say something exculpatory. But even in most of these cases, they usually drop charges on grounds of insufficient evidence, not positive proof of innocence.
The obvious rejoinder here is that the president of the United States isn’t just any person and that it is bad for our government and our country for a dark cloud to hang over the president’s head. Therefore, in theory, dissipating that cloud would be a good thing (even if such a purpose was not in any way Mueller’s charge when he was hired in 2017).
Mueller wanted the American people to hear him say he couldn’t dissipate the cloud. And by announcing that, he just spread it out over the president’s head again. This is why his peculiar locutions and soothsayer ambiguity represent a terrible failure of his mission as a public servant in this case.
He hasn’t clarified. He has muddied.
And if Mueller didn’t intend to signal to Congress that his report could serve as the basis for an impeachment, his statement was wildly incompetent. Again, you have to note what he chose to emphasize in a statement that left out a great many things. He cited the Justice Department opinion that forbade him from considering a criminal indictment of the president and noted: “The opinion says that the Constitution requires a process other than the criminal justice system to formally accuse a sitting President of wrongdoing.”
That other process is, of course, impeachment. Remember: He needn’t have brought it up. But he did.
In essence, he was saying to Congress: “We couldn’t exonerate Trump, and we couldn’t really examine the meaning of our inability to do so. So it’s up to you guys in Congress. As for me, I’m getting the hell out of Dodge.”
It’s important to note that by emitting these provocative remarks, he weakened the other point he was trying to emphasize: that the Russian attempts to hack the election were major acts of systemic infiltration we need to counter so they don’t happen again.
Mueller just made sure all the oxygen in Washington will be sucked into talking about the president’s post-election conduct and not Russia’s 2016 conduct. And he will reinforce the president’s willful refusal to take Russian hacking seriously (because he wrongly thinks if he does so, he would somehow be acknowledging his election was illegitimate). Mueller cannot be blamed for how Trump reacts, but he just made reaching bipartisan consensus on the need for cyber-protections against electoral interference far more difficult.
If I could exonerate him on this point, I would so state.
Source>https://nypost.com/2019/05/29/muellers-final-statement-was-a-disgraceful-mess/
Posted by theodore miraldi at 5:10 PM