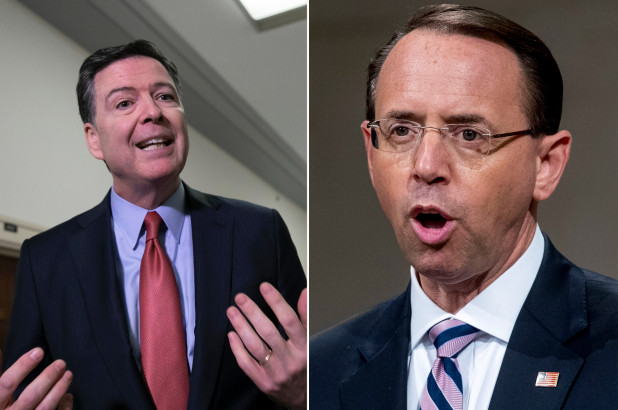 
Rod Rosenstein criticized James Comey on Monday, claiming the former FBI director became a “partisan pundit” after leaving the government.
Rosenstein’s public rebuke comes two days after his departure from the Justice Department and in response to Comey’s negative comments about both Rosenstein and Attorney General William Barr.
“Now, the former director is a partisan pundit, selling books and earning speaking fees while speculating about the strength of my character and the fate of my immortal soul,” Rosenstein said in the transcript of his speech to the Greater Baltimore Committee obtained by Fox News.
“That is disappointing. Speculating about souls is not a job for police and prosecutors. Generally, we base our opinions on eyewitness testimony.”
In a New York Times op-ed published earlier this month, Comey wrote: “It takes character like [former Defense Secretary Jim Mattis] to avoid the damage, because Mr. Trump eats your soul in small bites.”
Rosenstein added that although he “admired” Comey in the past, the former FBI head’s handling of the Hillary Clinton email investigation in 2016 was misguided.
“The clearest mistake was the director’s decision to hold a press conference about an open case, reveal his recommendation and discuss details about the investigation, without the consent of the prosecutors and the attorney general,” Rosenstein said.
“Then, he chose to send a letter to the Congress on the eve of the election stating that one of the candidates was under criminal investigation, expecting it to be released immediately to the public.”
Rosenstein also defended his decision to pen a memorandum supporting Comey’s firing, calling it “reasonable under the circumstances.”
In an interview with CNN last week, Comey said that Rosenstein was not a person of strong character and would not stand up to President Trump.
Source>https://nypost.com/2019/05/13/rod-rosenstein-slams-james-comey-as-partisan-pundit/
Posted by theodore miraldi at 8:03 AM