Survey: Only 2-in-15 Americans AWARE of SOARING ILLEGAL Immigration to U.S. 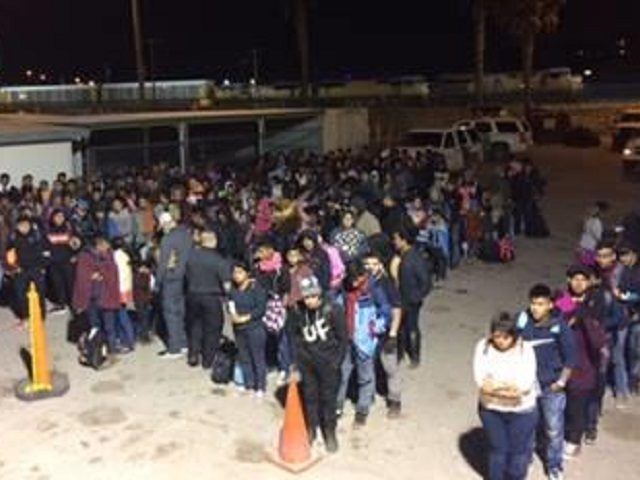 Less than two-in-15 American voters are aware of the soaring levels of illegal immigration across the United States-Mexico border, a new survey finds.

The latest Harvard/Harris Poll reveals that when Americans are asked how many illegal aliens are arriving at the U.S.-Mexico border, only about 13 percent answer correctly. Meanwhile, about 76 percent of Americans believe illegal immigration levels are vastly lower than they actually are.
For example, there were nearly 100,000 border apprehensions in April, alone. This puts illegal immigration at the southern border on track to outpace every year of illegal immigration under former President Obama and take the U.S. back to Bush era levels. At current rates, experts project there to be 863,000 border apprehensions this Fiscal Year, though this only counts illegal aliens who are caught at the border and does not include those who successfully cross.
Since Fiscal Year 2010, the number of border crossers and illegal aliens apprehended trying to enter the U.S. has been anywhere between 300,000 to 500,000.
In the Harvard/Harris Poll, though, less than two-in-15 American voters correctly said there are between 250,000 to 500,000 border apprehensions each year. Meanwhile, more than three-in-four Americans incorrectly said there are between zero to 250,000 border apprehensions a year.
Even among Republican voters, conservatives, and Trump supporters, a plurality of 35 percent incorrectly estimated that there are only 10,000 to 100,000 border apprehensions each year.

Illegal Immigration at 9X the Rate of 2017, Projected to Outpace Obama

Illegal immigration last month was nine times the level of the same month two years ago and is projected to outpace every year of Obama.
breitbart.com

141 people are talking about this
When voters were told that there were more than 100,000 border apprehensions in the last month, the majority, about 52 percent, said they supported President Trump’s decision to declare a national emergency at the southern border to build a wall along the U.S.-Mexico border. Another 48 percent said they oppose the national emergency.
Nearly six-in-ten working class and lower middle class Americans support the national emergency, as well as almost 65 percent of American voters who live in rural communities.
As Breitbart News reported, Republican voters, conservatives, and Trump supporters all rank building a border wall to stop illegal immigration and reducing legal immigration levels as their top priorities heading into the 2020 presidential election. For swing voters, building a border wall and reducing all immigration are the third and fourth top priorities, following stimulating jobs and passing an infrastructure bill.
Every year, the U.S. admits about 1.2 million mostly low-skilled legal immigrants to compete against working and middle class Americans for jobs. The vast majority, about 70 percent, of legal immigration to the country is driven by the process known as “chain migration,” whereby newly naturalized citizens can bring an unlimited number of foreign relatives to the U.S.


High levels of immigration, illegal and legal, put downward pressure on U.S. wages while redistributing about $500 billion in wealth away from America’s working and middle class and towards employers and new arrivals, research by the National Academies of Sciences, Engineering and Medicine has found.
Source>https://www.breitbart.com/politics/2019/05/14/survey-only-2-in-15-americans-aware-of-soaring-illegal-immigration-to-u-s/#

Posted by theodore miraldi at 7:45 AM