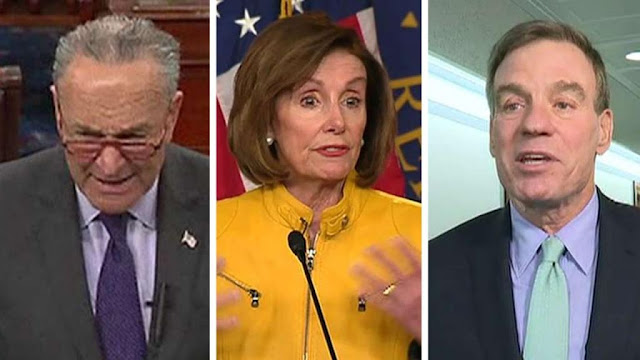 
The entire political establishment has been consumed by pearl-clutching outrage over President Trump's comments on electon information from foreign government.
Sen. Mark Warner, D-Va.: "The fact that this president has so little moral compass or understanding of the need to protect our nation that he says he would still welcome information from russia, china, or any other potential adversary if it helps his political campaign is outrageous. “
Senate Minority Leader Chuck Schumer, D-N.Y.: “To say that it’s okay for foreign countries to interfere in our elections with motives that are not what’s interest of the American people? Disgraceful, shocking.”
House Speaker Nancy Pelosi: “Yesterday, the president gave us, once again, evidence that he doesn’t know right from wrong. It’s a very sad thing, very sad thing that he does not know right from wrong. I believe that he’s involved in a criminal cover-up.”
Rep. Hakeem Jeffries, D-N.Y,: “Accepting assistance from a hostile foreign power like russia is treasonous behavior.”
Right. Remember those four: Warner. Pelosi. Schumer. Jeffries.
CLICK HERE TO READ MORE FROM STEVE HILTON.
We already know the Democrats are the party that paid for Russian dirt on Donald Trump and tried to cover it up by hiding it as a legal bill. We already know the Democrats approached the Ukrainian government for dirt on Donald Trump. We already know that foreign governments bought influence over our government for hundreds of millions of dollars through the Clinton Foundation when Hillary was Secretary of State.
But there's more. More Democrat hypocrisy. More Democrat corruption. All of it far worse than anything President Trump has even been accused of doing, let alone found guilty of doing.
Never mind foreign governments trying to affect our elections, something which the intelligence agencies, Special Counsel Robert Mueller, and everyone else said never actually happened, despite the attempts. The real scandal is foreign governments affecting our actual laws through foreign government lobbying.
CLICK HERE TO VIEW THE ENTIRE EPISODE.
So let's take a look at those sanctimonious Democrats prattling on about treason.
We called all four of these Democrat hypocrites to ask if, in addition to taking money, they or their staff have taken any meetings with foreign government lobbyists. None of them would say. Of course not, because we can be sure they did. That's how the Swamp works. You pay the money, you get the meeting.
And now ladies and gentlemen, I present to you the ultimate Democrat hypocrisy. We've seen how Schumer and Pelosi and Warner and Jeffries are in the pockets of Saudi Arabia and Mexico and Ukraine and China. But surely not Russia. Surely after all this fuss, after all these years of hysterical, apoplectic, self-righteous shrieking about Russia, no Democrat would take money from lobbyists for Russia, would they?
CLICK HERE TO GET THE FOX NEWS APP.
Chuck Schumer, Cory Booker, Kirsten Gillibrand, Robert Menendez, Richard Blumenthal, and yes, Mr  Treason himself, Hakeem Jeffries, have all taken money from lobbyists for Russia. There is only one worse example of Democrat hypocrisy: Someone who's running around accusing President Trump of being captured by a foreign power, but who himself is compromised not just by any foreign power but by the biggest and most hostile - America's No. 1 enemy, China.
Joe Biden took billions of dollars in bribes from the Chinese government in the form of payments to the Biden family businesses. And in exchange, he was soft on China the last time he was in office. #JoeChina
This fuss over foreign election information is a joke when you compare it to the shocking extent to which foreign governments have bought their way into our corrupt establishment. We don't know what favors were traded with foreign governments by Schumer, Pelosi and all the rest of them. We don't know about any secret meetings they had with lobbyists for hostile powers.

Video
But we should know. The Democrats were out last week with a virtue-signalling bill about banning foreign government election information. We'll take them seriously when they put forward a bill to publish the details of all the lobbyists they meet with and when they put forward a bill to ban lobbying by hostile foreign governments.
But don't hold your breath. These Democrat hypocrites - just like the rest of Washington, D.C.. - are totally corrupted by foreign government lobbying and cash. The outrage over election meddling is their attempt to distract from the real foreign interference in our democracy -- the institutionalized and anti-American corruption of foreign government lobbying.
Adapted from Steve Hilton's monologue on "The Next Revolution" on June 16, 2019.
Source>https://www.foxnews.com/opinion/steve-hilton-forget-trump-democrat-hypocrites-are-corrupted-by-foreign-lobbying-and-cash
Posted by theodore miraldi at 7:47 AM