Hypocrites Get LAST KICKS at Sarah Sanders, SLOBBERING Over Her White House Exit 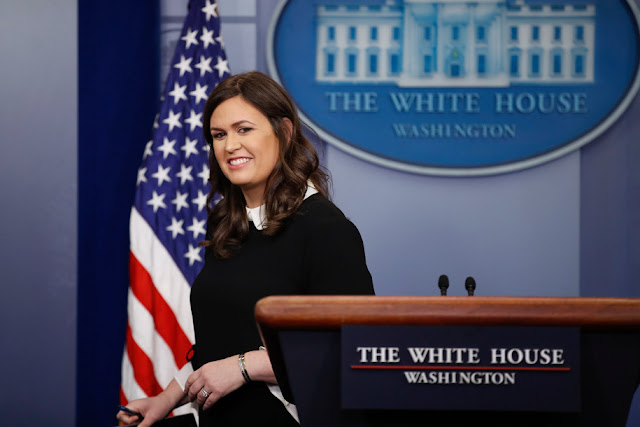 Michael Goodwin
Sarah Sanders had it coming. If she wanted the respect of the Washington press corps and a fat corporate job after leaving the White House, she should have worked for a Democrat.
But she chose to be the press secretary for the Worst Human Being Ever, so she deserves the mud bath she’s getting on her way out the door.
Go back to Arkansas, you hick, you lying Republican rube. Besides, as a woman and mother, how could you work for him?
That pretty much sums up the tone of the coverage that greeted Sanders’ announcement that she is leaving after two years on the firing line. There was neither fondness nor civility and none of the usual willingness to let bygones be bygones when the day is done.
This was personal and it was cruel.
Moments like this reveal how nasty and partisan the left-wing media has become. Their hatred of Trump knows no bounds, and many are using the departure of Sanders to engage in what the late Charles Krauthammer called “moral preening.”
Sanders, you see, is unforgiven and will never eat another expense- account lunch in the nation’s capital. The media enforcers are better than her and she is condemned for eternity.
Donny Deutsch, on MSNBC, said her legacy will be the “toxicity and the cancer that stays with” her. Joe Scarborough chimed in to say she would “have trouble” getting another Washington job for the rest of her life.
“She would claim to represent the truth on behalf of a president who lies,” columnist Margaret Sullivan wrote in The Washington Post. “She did it disrespectfully, and apparently without shame or an understanding of what the role of White House press secretary should be.”
Sullivan accused Sanders of lying with a “distinctive curled-lip disdain” and stopped her finger-wagging only long enough to bring in a wise man to put it all in historic ­perspective.
“Sanders failed at all aspects of the job,” said the wise man, one Joe Lockhart, a press secretary for … Bill Clinton.
Ah yes, the good old days, when lying to the press was commonly called spin. Media Democrats don’t mind being misled as long as it is by a fellow traveler.
We’re all on the same team, right?
Lockhart is prime proof that nothing succeeds like working for a corrupt, dishonest — and impeached — Democrat.
When he was promoted in October 1998 to replace Mike McCurry, Lockhart was welcomed with a series of puff pieces. None other than George Stephanopoulos — Clinton’s first press secretary and ever since an ABC anchor — dutifully praised him effusively. Stop the presses.
In its profile, The New York Times slobbered, then slobbered some more. “Mr. Lockhart is a Mets and Bruce Springsteen fan who comes across like a regular guy you would probably enjoy having a beer with,” it wrote, saying he “is inclined to fall back on humor as the scandal coverage continues.”
The article, like several others, quoted his wife, who like Lockhart was a former journalist, as saying she hoped he could still get home to read their daughter, Clare, her favorite bedtime story, “Little Bear.’”
Sarah Sanders, who graduated from Ouachita Baptist University in Arkansas, has three young children. I bet you don’t know their names and their favorite bedtime stories.
When it came to defending a president who had sex with an intern in the Oval Office, “regular guy” Lockhart was a total warrior. On the day Clinton finally admitted it all under oath, Lockhart, speaking 20 years later, told the Times his attitude was “Well, we’ve just got to fight our way out of this.”
Last year, on CNN, where he is a paid commentator, he insisted his defense of Clinton was somehow different than Sanders’ defense of Trump. Presumably that covers the attempts to hide Monica Lewinsky in the Pentagon, the pardons-for-sale scandal, the renting out of the Lincoln Bedroom and many other deceptions.
Yet working for Clinton certainly didn’t damage Lockhart’s career, as he later scored top gigs at Facebook and the National Football League. When Barack and Michelle Obama left the White House, they leased Lockhart’s mansion in DC’s ritzy Kalorama district, then bought it for $8.1 million.
The Democrat-media industrial complex was a major feature of both the Clinton and Obama administrations. Jay Carney, Obama’s second press secretary, was Time magazine’s Washington bureau chief and his wife is a reporter at ABC.
Carney was on duty when PolitiFact named Obama’s line that “If you like your health care plan, you can keep it,” the Lie of the Year for 2013.
There were no media calls for Carney to resign in protest over Obama’s lie, and his loyalty earned him a very nice afterlife. He, too, moved to CNN, then became Amazon’s senior vice president for global corporate affairs.
Sanders, just 36, will never be a member of that elite boys club. Journalists might have at least recognized her for being just the third woman to hold the job, but that would mean giving Trump credit and excusing her decision to work for him.
Special counsel Robert Mueller also showed his bias by concluding in his report that Sanders made up a claim that she had heard from numerous FBI agents who supported the firing of James Comey.

Click Photo Below To View Video
Sarah Huckabee Sanders explains her lie exposed in Mueller report
Why Mueller felt the need to go there remains unclear, but as I noted then, this was surely not the first time ever a press secretary misled the media.
In its story on her leaving, the Times was kinder than most but scolded Sanders for “breaking with decades of tradition” by canceling daily press briefings. To support their arguments, reporters quoted a former Obama press aide. That’s teamwork for you.
In fact, the televised briefings became a circus because Jim Acosta and other Washington showboats hijacked them to display their contempt for Trump. The briefings are not missed except by insiders looking for a stage and an easy headline.
But Sanders will be missed. She was quick on her feet and gave as good as she got. She was also smart enough not to take herself too seriously.
“No one elected me to anything,” she told the Times. “They elected the president.”
That’s the fact the media can’t stomach.
Chancellor’s racial priorities
It turns out that Chancellor Richard Carranza was counting racial beans long before he got to New York. Reader Krista Donaldson writes: “I live in San Francisco and when he came to our elementary school’s PTA meeting, he told the parents (mostly white middle class) that he didn’t care about our kids — he was there only for minority kids.
“It was shocking, especially to parents who had been working hard and fundraising to make the school better for all children.
“He had a very negative impact and our schools still suffer from the damage of his tenure.”
Web morsel
Headline: Americans Now Spend More at Internet Stores Than Restaurants