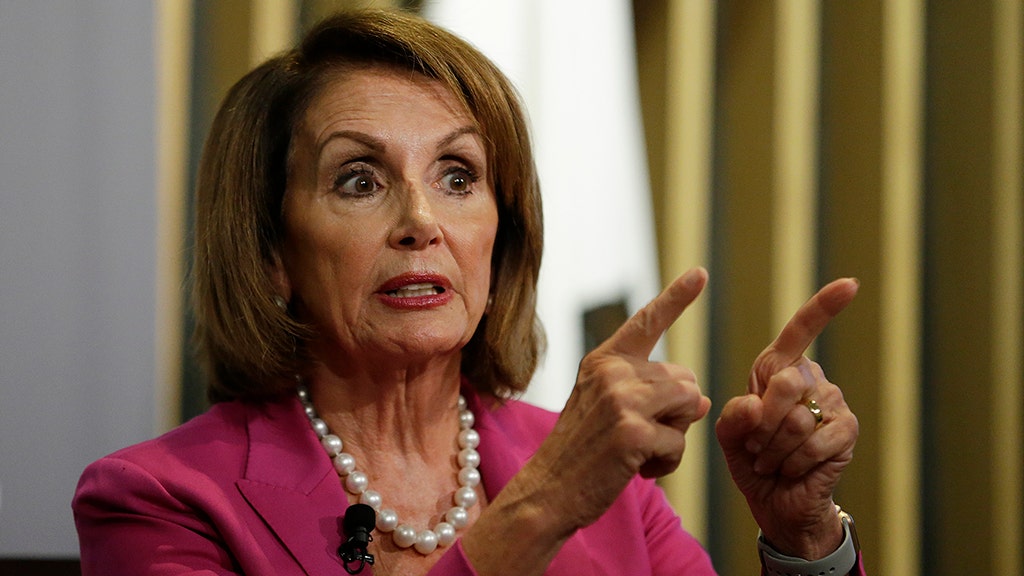 
Liberal MSNBC hosts Ari Melber and Chris Matthews both condemned House Speaker Nancy Pelosi's recent call to lock up President Trump on Thursday -- comparing it to a rallying cry that Trump supporters have long used against Hillary Clinton.
Pelosi told senior Democrats that she would like to see Trump “in prison,” according to Politico. While MSNBC is typically in lockstep with Pelosi, Melber and Matthews didn’t agree with her reported comment.
HELL FREEZES OVER AS JIM ACOSTA, JOE SCARBOROUGH PRAISE TRUMP’S D-DAY SPEECH
Melber asked if the counter argument would become, “Is this the Democrats' version of 'lock her up?'” The MSNBC host then said “there was a judicial, legal, process,” which “did not result in an indictment, whether you like it or not,” obviously referring to the Mueller report.

“The next step would be, does Congress want to deal with it. If the speaker doesn’t want to go that route, she has every right to explain that,” Melber said. “But if she doesn’t want to go that route and then she is making prison-esque, jail-esque references does she risk… getting close to a 'lock her up' frame?”
“Lock her up” was famously chanted at Trump campaign rallies leading up to the 2016 election against Clinton.
Later in the day, Matthews had similar thoughts during “Hardball,” comparing Pelosi’s comments to “stuff we used to see in Pakistan.”
MSNBC’s Chris Matthews doesn’t agree with Speaker Nancy Pelosi’s reported comments about sending the president to prison.
"Now the Speaker of the House is saying [Trump] ought to be in prison,” Matthews said. “Imagine that you live in some rinky-dink country out in the world that has always looked up to ours. You know, some fourth-world country, doesn't even have democracy. And here we have the leader of the opposition, saying the other guy ought to be in prison. This is the stuff we used to see in Pakistan in the old days. Defeat the guy, then hang him."
ANTI-TRUMP PRESS FAILS TO GIN UP ‘NASTY’ MARKLE, TRUMP FEUD AS PRESIDENT TAKES THE HIGH ROAD
Famed Harvard law professor and attorney Alan Dershowitz also blasted the comment.
"I have to tell you, as a liberal Democrat, I'm appalled at Nancy Pelosi. The idea of her weaponizing the criminal justice system -- and calling for the imprisonment of the president of the United States without him being charged with any crime, without him being charged with any impeachable offense -- it's just outrageous," Dershowitz said on Fox News' "The Ingraham Angle."
Politico reported that Pelosi made the remark during a meeting with other top Democrats.
"You can't just target a president and say we want to see him in prison without producing evidence," Dershowitz added.
Trump responded Thursday in an exclusive interview with Laura Ingraham calling the Democratic leader a "disgrace."
Fox News’ Victor Garcia contributed to this report.
Source>https://www.foxnews.com/entertainment/liberal-msnbc-hosts-pelosi-jail-trump
Posted by theodore miraldi at 3:25 PM