RETRO: Obama To Americans: You Don't DESERVE To Be FREE 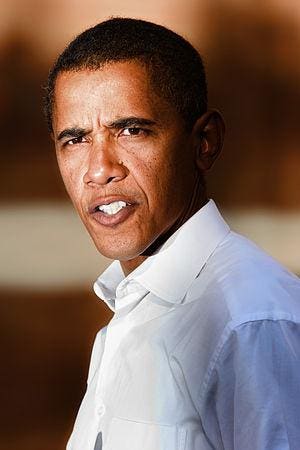 President Obama's Kansas speech is a remarkable document. In calling for more government controls, more taxation, more collectivism, he has two paragraphs that give the show away. Take a look at them.

there is a certain crowd in Washington who, for the last few decades, have said, let's respond to this economic challenge with the same old tune. "The market will take care of everything," they tell us. If we just cut more regulations and cut more taxes--especially for the wealthy--our economy will grow stronger. Sure, they say, there will be winners and losers. But if the winners do really well, then jobs and prosperity will eventually trickle down to everybody else. And, they argue, even if prosperity doesn't trickle down, well, that's the price of liberty.
Now, it's a simple theory. And we have to admit, it's one that speaks to our rugged individualism and our healthy skepticism of too much government. That's in America's DNA. And that theory fits well on a bumper sticker. (Laughter.) But here's the problem: It doesn't work. It has never worked. (Applause.) It didn't work when it was tried in the decade before the Great Depression. It's not what led to the incredible postwar booms of the '50s and '60s. And it didn't work when we tried it during the last decade. (Applause.) I mean, understand, it's not as if we haven't tried this theory.

Though not in Washington, I'm in that "certain crowd" that has been saying for decades that the market will take care of everything. It's not really a crowd, it's a tiny group of radicals--radicals for capitalism, in Ayn Rand's well-turned phrase.


The only thing that the market doesn't take care of is anti-market acts: acts that initiate physical force. That's why we need government: to wield retaliatory force to defend individual rights.
Radicals for capitalism would, as the Declaration of Independence says, use government only "to secure these rights"--the rights to life, liberty, property, and the pursuit of happiness. (Yes, I added "property" in there--property rights are inseparable from the other three.)
That's the political philosophy on which Obama is trying to hang the blame for the recent financial crisis and every other social ill. But ask yourself, are we few radical capitalists in charge? Have radical capitalists been in charge at any time in the last, oh, say 100 years?
I pick 100 years deliberately, because it was exactly 100 years ago that a gigantic anti-capitalist measure was put into effect: the Federal Reserve System. For 100 years, government, not the free market, has controlled money and banking. How's that worked out? How's the value of the dollar held up since 1913? Is it worth one-fiftieth of its value then or only one one-hundredth? You be the judge. How did the dollar hold up over the 100 years before this government take-over of money and banking? It actually gained slightly in value.
Laissez-faire hasn't existed since the Sherman Antitrust Act of 1890. That was the first of a plethora of government crimes against the free market.
Radical capitalists are just beginning to have a slight effect on the Right wing. The overwhelming majority on the Right are eclectic. Which is a nice way of saying inconsistent.
The typical Republican would never, ever say "the market will take care of everything." He'd say, "the market will take care of most things, and for the other things, we need the regulatory-welfare state."
They are for individualism--except when they are against it. They are against free markets and individualism not only when they agree with the Left that we must have antitrust laws and the Federal Reserve, but also when they demand immigration controls, government schools, regulatory agencies, Medicare, laws prohibiting abortion, Social Security, "public works" projects, the "social safety net," laws against insider trading, banking regulation, and the whole system of fiat money.
Obama blames economic woes, some real some manufactured ("inequality") on a philosophy and policy that was abandoned a century ago. What doesn't exist is what he says didn't work.
Obama absurdly suggests that timid, half-hearted, compromisers, like George W. Bush, installed laissez-faire capitalism--on the grounds that they tinkered with one or two regulations (Glass-Steagall) and marginal tax rates--while blanking out the fact that under the Bush administration, government spending ballooned, growing much faster than under Clinton, and 50,000 new regulations were added to the Federal Register.
The philosophy of individualism and the politics of laissez-faire would mean government spending of about one-tenth its present level. It would also mean an end to all regulatory agencies: no SEC, FDA, NLRB, FAA, OSHA, EPA, FTC, ATF, CFTC, FHA, FCC--to name just some of the better known of the 430 agencies listed in the federal register.
Even you, dear reader, are probably wondering how on earth anyone could challenge things like Social Security, government schools, and the FDA. But that's not the point. The point is: these statist, anti-capitalist programs exist and have existed for about a century. The point is: Obama is pretending that the Progressive Era, the New Deal, and the Great Society were repealed, so that he can blame the financial crisis on capitalism. He's pretending that George Bush was George Washington.
We radical capitalists say that it was the regulatory-welfare state that imploded in 2008. You may disagree, but let's argue that out, rather than engaging in the Big Lie that what failed was laissez-faire and individualism.
The question is: in the messy mixture of government controls and remnants of capitalism, which element caused the Great Depression and the recent financial crisis?
By raising that question, we uncover the fundamental: the meaning of capitalism and the meaning of government controls. Capitalism means freedom. Government means force.
Suddenly, the whole issue comes into focus: Obama is saying that freedom leads to poverty and force leads to wealth. He's saying: "Look, we tried leaving you free to live your own life, and that didn't work. You have to be forced, you have to have your earnings seized by the state, you have to work under our directions--under penalty of fines or imprisonment. You don't deserve to be free."
As a bit of ugly irony, this is precisely what former white slave-owners said after the Civil War: "The black man can't handle freedom; we have to force him for his own good." The innovation of the Left is to extend that viewpoint to all races.
Putting the issue as force vs. freedom shows how the shoe is on the other foot regarding what Obama said. Let me re-write it:

there is a certain crowd in Washington who, for the last few decades, have said, let's respond to this economic challenge with the same old tune. "The government will take care of everything," they tell us. If we just pile on even more regulations and raise taxes--especially on the wealthy--our economy will grow stronger. Sure, they say, there will be winners and losers. But if the losers are protected by more social programs and a higher minimum wage, if there is more Quantitative Easing by the Fed, then jobs and prosperity will eventually trickle up to everybody else. And, they argue, even if prosperity doesn't trickle up, well, that's the price of the social safety net.
Now, it's a simple theory. And we have to admit, it's one that speaks to our intellectuals' collectivism and Paul Krugman's skepticism about freedom. That's in Harvard's DNA. And that theory fits well on a bumper sticker. (Laughter.) But here's the problem: It doesn't work. It has never worked. (Applause.) It didn't work when it was tried in the Soviet Union. It's not what led to the incredible booms in India and China. And it didn't work when Europe tried it during over the last decades. (Applause.) I mean, understand, it's not as if we haven't tried this statist theory.

How does that sound? That's blaming an actual, existing condition--government controls and wealth-expropriation--not a condition that ended in the late 19th century.
So which is the path to prosperity and happiness--freedom or force? Remember that force is aimed at preventing you from acting on your rational judgment.
Obama's real antagonist is Ayn Rand, who made the case that reason is man's basic means of survival and coercion is anti-reason. Force initiated against free, innocent men is directed at stopping them from acting on their own thinking. It makes them, under threat of fines and imprisonment, act as the government demands rather than as they think their self-interest requires. That's the whole point of threatening force: to make people act against their own judgment.
The radical, uncompromised, laissez-faire capitalism that Obama pretends was in place in 2008 is exactly what morality demands. Because, as Ayn Rand wrote in 1961: "No man has the right to initiate the use of physical force against others. . . . To claim the right to initiate the use of physical force against another man--the right to compel his agreement by the threat of physical destruction--is to evict oneself automatically from the realm of rights, of morality and of the intellect."
Obama and his fellow statists have indeed evicted themselves from that realm.