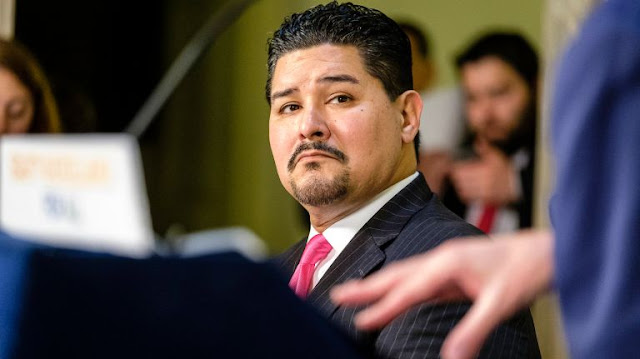 
Chancellor Richard Carranza waived job postings and other requirements to hire ex-employees he knew in California and Texas, including the former vice president of a company that has since racked up millions in sales to New York City schools, The Post has learned.
A complaint to the city’s Special Commissioner of Investigation for city schools alleged the Department of Education violated rules in giving six-figure jobs to two women Carranza met in two other school districts he led.
According to the complaint and inside sources, the DOE hired San Francisco teacher Martha Martin Perez and ex-Houston principal Raquel Sosa-Gonzalez outside normal protocol “at the instruction of Chancellor Carranza.”
Whistleblowers also questioned the hiring of Abram Jimenez as “senior executive director of continuous improvement” for New York City schools, a newly created job in the DOE bureaucracy with a salary of $205,416.
“It stinks. It’s cronyism,” a veteran educator charged.
DOE spokesman Doug Cohen defended Carranza’s decisions.
“Like all leaders in new roles, the chancellor recruited some of the most talented people he’d worked with previously to join his team,” Cohen said. “They were hired in accordance with DOE rules and regulations, based on their proven leadership ability and wide-ranging experience.”
Despite repeated requests, Cohen would not specify the rules and regulations that applied or explain how the employees were hired.
Normally, a city agency makes job openings known internally as well as publicly, so that current employees or outsiders can apply. The listings describe duties, cite required qualifications and give salary ranges.
Carranza has never publicly announced Jimenez’s hiring or the creation of his high-level job. Cohen said the job posting was “waived based on his senior leadership roles in large urban districts.”
Last week, the DOE described the position as a “citywide leader” whose duty is “to transform student outcomes in historically underserved schools and communities.”
Jimenez will oversee a staff of 40 and report directly to Carranza’s first deputy chancellor, Cheryl Watson-Harris, Cohen said.
While Jimenez has a doctorate degree in education, he holds no New York state certification as a school district administrator — a typical requirement for such positions.
The DOE said Jimenez “does not require state certification.”
However, a recent DOE ad seeking applicants for a $125,000 job as Jimenez’s second in command says candidates “must have” certification as a school district administrator or leader, plus state certification in a subject area.
Jimenez served as chief of schools in San Francisco for one year, from August 2015 to July 2016, during Carranza’s last year as that city’s school superintendent. Before that, Jimenez was vice president of Illuminate Education Inc., a for-profit company based in Irvine, Calif., which sells digital student-data management systems.
When Carranza left San Francisco to lead Houston schools, Jimenez returned to Illuminate as vice president until September 2018, when Carranza, who took over New York City schools in April 2018, hired him. Jimenez quit Illuminate when he was hired by Carranza.
However, within three months of Jimenez’s arrival, Illuminate gained a foothold in New York City. The company has since racked up 28 purchase orders from city schools totaling $700,000 to date.
Each order is for $25,000 — just below the threshold at which city Comptroller Scott Stringer would have oversight.
Illuminate bought IO Education, another company that sells student data systems, in July 2018, while Jimenez was still vice president. IO has racked up $33 million in sales from New York City schools since 2011, records show. Since its acquisition by Illuminate, IO has pocketed $5.4 million in New York City purchase orders.
But, again, IO purchases do not exceed $25,000, so the city Comptroller’s Office cannot scrutinize which schools are customers, what the payments cover and whether the money is well spent.
Stringer vowed to look into the loophole.
“No agency should be manipulating contract spending to evade scrutiny and our charter-mandated oversight,” he said. “We will work to ensure that’s not the case and that this spending is transparent.”
The DOE insisted it had nothing to do with the deals.
“Schools are allowed to make purchases of $25,000 or under on their own,” Cohen said.
Jimenez, he added, “has not dealt with this company since he joined the DOE and would recuse himself if it came up.”
In the other out-of-town hires, Lauren Siciliano, the DOE’s deputy chief operating officer, e-mailed staff in September 2018, “We are granting a waiver to exempt the position below from posting.” The job: “associate director for special projects” in the office of English-language learners.
Martin Perez, the California teacher Carranza knew, started the $117,000-a-year job in October 2018. When the office later reorganized as the Division of Multilingual Learners in December, she took a different job — “associate director for community and family empowerment” — with the same salary.
When Martin Perez was introduced to the staff, “People asked her, ‘How come you just packed up and moved to New York from San Francisco without knowing anyone?’ ”
“Oh, I know Richard Carranza,” she replied, a co-worker recalled.
The DOE said the posting was waived “based on her 18 years of experience, consistent with DOE policies.”
She has not yet been certified by New York.
In the same division, Sosa-Gonzalez, Carranza’s Houston friend, was put on payroll in January 2019 as “senior director of newcomers/students in temporary housing” with a $149,000 salary. She is seen in multiple photos with Carranza on social media.
She calls Carranza “family” in the caption to one photo where they are standing side by side, Carranza’s arm around her.
Sosa-Gonzalez, an ex-principal of a 569-student Houston elementary school, holds New York certification as a “school building leader,” but it’s unclear what, if any, was required for her high-level job.
The complaint charged there is no evidence in DOE records that her job was ever posted. The DOE would not address the allegation.
Jimenez, Martin Perez and Sosa-Gonzalez did not return messages seeking comment.
Source>https://nypost.com/2019/06/08/richard-carranza-accused-of-waiving-protocol-to-hire-pals-in-high-ranking-jobs/
Posted by theodore miraldi at 9:23 AM