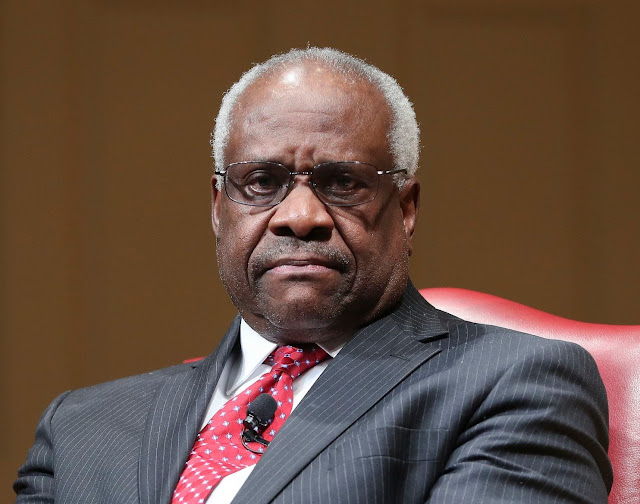 
In a concurring opinion in a Supreme Court case announced Monday, Justice Clarence Thomas issued a lengthy call for his colleagues to overturn "demonstrably erroneous decisions" even if they have been upheld for decades -- prompting legal observers to say Thomas was laying the groundwork to overturn the seminal 1973 case Roe v. Wade, which established a constitutional right to abortion.
Thomas' blunt opinion came in a case concerning the so-called "double-jeopardy" doctrine, which generally prohibits an individual from being charged twice for the same crime. But both pro-life and pro-choice advocates quickly noted the implications of his reasoning for a slew of other future cases, including a potential revisiting of Roe.
"When faced with a demonstrably erroneous precedent, my rule is simple: We should not follow it," Thomas wrote, noting that lower federal courts should also disregard poor precedents. Thomas went on to add that precedent "may remain relevant when it is not demonstrably erroneous."
Neal Katyal, a Georgetown Law professor and former Acting Solicitor General of the United States, warned that Thomas' reasoning could have far-reaching implications.
ILLINOIS REPEALS BAN ON PARTIAL BIRTH ABORTIONS, AS PRO-LIFE GROUPS LAMENT 'DEATH PENALTY' FOR THE UNBORN
"Justice Thomas is essentially laying the intellectual groundwork for a massive revisiting of settled precedents," Katyal wrote. "This can prove to be very, very dangerous."
Added Slate legal analyst Mark Joseph Stern: "His repudiation of stare decisis isn’t really about Gamble. It’s aimed at a clear set of precedents—those enshrining a constitutional right to abortion access and same-sex marriage."
Thomas' argument began by noting that the role of federal courts is primarily to uphold the Constitution above all else -- and if that means overturning long-held precedents set by other federal courts, Thomas wrote, so be it.
Associate Justice Clarence Thomas wrote in an opinion Monday that precedent should always be secondary to the Constitution. (AP Photo/J. Scott Applewhite)
"The Constitution tasks the political branches—not the Judiciary—with systematically developing the laws that govern our society," Thomas wrote. "The Court’s role, by contrast, is to exercise the 'Judicial Power,' faithfully interpreting the Constitution and the laws enacted by those branches."
English common law, Thomas said, relied on a precedent-focused principle called "stare decisis," meaning "let the decision stand." But unlike English common law, Thomas asserted, "we operate in a system of written law in which courts need not—and generally cannot—articulate the law in the first instance."
Thomas went on to address several counter-arguments, including the idea that precedent allows for more consistent legal determinations, and more certainty for litigants. He cited, for example, arguments to that effect by Justice Stephen Breyer in previous cases.
"As I see it, we would eliminate a significant amount of uncertainty and provide the very stability sought if we replaced our malleable balancing test with a clear, principled rule grounded in the meaning of the text," Thomas countered. "The true irony of our modern stare decisis doctrine lies in the fact that proponents of stare decisis tend to invoke it most fervently when the precedent at issue is least defensible."

"When faced with a demonstrably erroneous precedent, my rule is simple: We should not follow it."
— Justice Clarence Thomas

Thomas concluded: "In my view, if the Court encounters a decision that is demonstrably erroneous—i.e., one that is not a permissible interpretation of the text—the Court should correct the error, regardless of whether other factors support overruling the precedent. ... A demonstrably incorrect judicial decision ... is tantamount to making law, and adhering to it both disregards the supremacy of the Constitution and perpetuates a usurpation of the legislative power."
Kristen Clarke, the President and Executive Director of the Lawyers’ Committee for Civil Rights Under Law, told Fox News that Thomas' comments were part of a larger attack on abortion rights.
"One can't ignore the timing of Justice Thomas's concurring opinion which comes at a moment when we are seeing a coordinated and relentless attack on Roe v. Wade across the country," Clarke said. "The laws that have been adopted in several states violate the Court's settled precedent in Roe. In his concurring opinion, Justice Thomas has made clear his willingness to reject precedents that he personally deems incorrect, a position that unnecessarily politicizes the Court.
"Justice Thomas's view is fundamentally at odds with the way in which the Supreme Court has generally operated," Clarke said. "It is a view that threatens to further undermine the integrity of the Court and weaken the stability of the institution."
Thomas, in the Gamble case, ended up joining the court's 7-2 majority in ruling that individuals can be prosecuted by both the state and the federal government for the same crime, without violating the constitution's double jeopardy rules.
MLK JR'S NIECE REBUKES GILLIBRAND ON ABORTION: 'CIVIL RIGHTS BEGIN IN THE WOMB'
The idea, backed by generations of precedent, is that the states and federal government are separate sovereign entities, and that a crime against one is distinct from a crime against the other. That precedent, Thomas ruled, was not demonstrably erroneous, and therefore the majority was justified in following it.

Democratic presidential candidate Joe Biden reverses stance on Hyde Amendment; reaction and analysis on 'The Five.'
Only the unusual pairing of Neil Gorsuch and Ruth Bader Ginsburg dissented, saying that argument was essentially a loophole to circumvent the Constitution's prohibition against double jeopardy.
"A free society does not allow its government to try the same individual for the same crime until it's happy with the result," Gorsuch wrote.
In the majority opinion, Justice Samuel Alito was more deferential to precedent, saying "special justification" is needed to overturn precedent, even where the Constitution would serve as a lodestar.
Nevertheless, Alito noted that "the strength of the case for adhering to [previous] decisions grows in proportion to their ‘antiquity,'" meaning that newer precedents are less secure than older ones.
Monday's opinion was Thomas' second in as many months to hearten pro-life advocates. In May, Thomas wrote a concurring opinion in a separate case that the Supreme Court would soon have to address the constitutionality of pro-life abortion laws head-on.
The justices, by a 7-2 vote in that case, upheld an Indiana law requiring the cremation or burial of fetal remains -- but they declined to take up the constitutionality of a law that would have barred abortion based on disability, sex, or race.
"Given the potential for abortion to become a tool of eugenic manipulation," Thomas wrote, "the court will soon need to confront the constitutionality of laws like Indiana's," Thomas wrote. "From the beginning, birth control and abortion were promoted as means of effectuating eugenics."
Source>https://www.foxnews.com/politics/clarence-thomas-calls-for-abandoning-demonstrably-erroneous-precedent-touching-off-intense-roe-v-wade-speculation
Posted by theodore miraldi at 5:11 PM